Pitfall 3D: Beyond the Jungle Review

While not perfect, Pitfall 3D is a very fresh and original platform game in many ways.

It's really no wonder that Activision's created a modern PlayStation version of Pitfall, the "Indiana Jones for the people" game that probably best defined Activision's initial efforts as a company way back in the days of the Atari 2600. Yes, Pitfall Harry is back once again, or his son rather, and there's a world that needs saving. There are scorpions, pits, rolling logs, and vines in it, but the trees are now gone and it's all somehow turned 3D on him.

The story sees Harry entering an otherly dimensional world that's being enslaved by an evil being called The Scourge, who's changing all the world's magical energy from good to bad. The general gameplay consists of avoiding falling boulders, swinging from vines and chains, and leaping from floating, and sometimes crumbling, platforms - and every now and again, executing all of these while being chased by a monster. This may sound like fairly standard fare for a platform game, and it is, but Activision's got the timing down to an art (you have just enough time to plan your move and make it - no more, no less) and there's a complete lack of blind jumps - a frustrating bit that plagues most platformers. A nice showing of inventiveness and originality in its design shines through as well.

During the quest, you collect chips made up of a magic element known as lucense, which can be traded in at select points for a health recharge. You'll often come across lucense in its raw liquid form (blue is good, red is bad) spilled on the ground, which will cause your character to levitate above it. You can still control which direction you float in, but it's not easy and lends another dynamic to the gameplay. This is especially true in the first boss level, in which Harry must float up to and turn four different cranks, avoiding various obstacles and the blows of a huge gladiator who wades in the center of the lucense-filled room. Each turn fills the room with more liquid magic, but if you are too slow, the gladiator will turn them back and lower the level back to where you started. If you're quick to turn all four though, you'll drown your enemy in the deep blue.

Each of the three boss levels has a different play mechanic and their even spacing throughout the game keeps the basic gameplay from growing monotonous. The first two boss scenarios are pretty fun (the second being a kind of twisted shooting gallery, where you have to hop over lava for your ammo), as is the rest of the game. But the last boss level, where you confront The Scourge, is kind of lackluster and seems somewhat anticlimactic compared with the others. The Scourge stage and some funky collision detection you'll notice throughout (which can sometimes help you but most of the time will frustratingly knock you off a ledge and get you killed) are Pitfall 3D's only really significant warts, though they do take away significantly from what's a really enjoyable game otherwise.

The visuals are good, the intelligent camera ensures your perspective is always perfect for what you need to accomplish, and the enemies are uniquely gruesome (from the monster dog Bornswags to the graphically impressive flaming Fire Djinns). The soundtrack is also quite dynamic and very fitting of an adventure game, and the voiceover comments of Bruce Campbell are thankfully few and far between, keeping them from getting too annoying.

There's also a lot to explore in Pitfall 3D. Each level has ten gold bars (each worth ten chips of lucense) and at least several bonus lives hidden just a little off the beaten path. The levels are also set up in a nonlinear fashion, which is great because if you have a problem carrying off one of the stage's multiple objectives, you can simply try another. This is pretty unlike most platformers - wherein if you're stuck, you're stuck - and it seems to encourage exploration.

While not perfect, Pitfall 3D is a fresh and original platform game in many ways, not the least of which is that it looks nothing like Super Mario 64, Tomb Raider, or Crash Bandicoot. Most importantly though, it's almost as fun as the original Pitfall was way back on the Atari 2600, and that's still pretty significant praise. 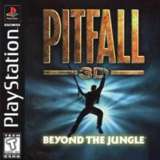 Pitfall 3D: Beyond the Jungle
Follow
$7.99 on Walmart
Buy