Pirates of the Caribbean: The Legend of Jack Sparrow Review

The Legend of Jack Sparrow is a pretty standard hack-and-slash action game that doesn't deliver on much of the stumblingly bombastic charm of its title character.

For a film based on an amusement-park ride, Pirates of the Caribbean: The Curse of the Black Pearl turned out, by most accounts, surprisingly well. Its success as a fun, swashbuckling adventure was due in no small part to Johnny Depp's Oscar-nominated performance as pirate extraordinaire Captain Jack Sparrow. Bethesda Softworks and 7 Studios attempt to put the spotlight on this bizarrely magnetic character's past escapades with Pirates of the Caribbean: The Legend of Jack Sparrow, going so far as to get Depp himself to record original dialogue for the game. The idea of learning more about how Captain Jack turned into the charismatic brigand we know him as is enticing, but The Legend of Jack Sparrow can't manifest much of the charm or personality of the character, and the gameplay itself is bland and repetitive--not at all evocative of Captain Jack Sparrow's woozy enthusiasm.

Though the game's release has been timed to line up with the theatrical release of Pirates of the Caribbean: Dead Man's Chest, The Legend of Jack Sparrow doesn't even dip its toe into the story of Jack's dealings with the squid-faced Davy Jones. The game opens with Captain Jack and the blacksmith-turned-pirate Will Turner hunting down a valuable trinket held within the confines of a Spanish fortress, only to find themselves double-crossed, captured, and preparing for a short drop and a sudden stop. While standing at the gallows, Jack attempts to buy some time by recounting past exploits, which is when the game really gets going. As Jack reminisces, you'll find yourself reliving some of the key encounters from The Curse of the Black Pearl, along with voyages to the Far East, an Arctic glacier, and more.

Many of the brand-new missions feel a little too much like video game standards, but what makes the game's structure really interesting is that Captain Jack Sparrow uses his gift for fiction to rewrite his own history, which is the version you'll be playing through. It's a clever device that gives the game license to do as it pleases with the established Pirates backstory, and it's used to mildly humorous effect a few times, such as when the story veers suddenly and violently away from the truth to better suit Jack's ego or when characters exclaim that they weren't actually there in the middle of a flashback. These moments, though, are few, and though the game features many over-the-top characters, The Legend of Jack Sparrow comes across as a bit dry, managing only a shadow of the quirky energy that its cinematic forebearer crackled with. Even Depp himself, the only cast member to provide his voice for the game, sounds a little bored through most of the game.

One cannot reasonably be expected to effectively buckle swash without a rapier, saber, scimitar, cutlass, or some other kind of blade to ply your piratical trade with, and as such, swordplay is the main focus of the gameplay in The Legend of Jack Sparrow. The game can be played either solo or cooperatively with a friend, with player two taking on the role of Will Turner or Elizabeth Swann, depending on the tale that Jack is currently weaving. The game works well enough cooperatively, though it doesn't change the core experience much, since even when you're all by your onesies, you'll still have an artificial-intelligence-controlled compatriot to fight alongside you. You can hot swap which character you're controlling on the fly, though it seems to take the friendly AI a few more sword slashes to best an enemy, they generally stay out of the way, and you never have to worry about them dying on you.

The swordplay itself is a bit mashy, with just two basic sword slashes that you can string together into three-hit combos in a few different ways. You can also block attacks, perform rolling dodges, and toss out projectiles such as Molotov cocktails, hand axes, and fish. You can upgrade the effectiveness of many of your moves using money that you pick up by running enemies through, smashing crates, and plundering treasure chests, though the enemies seem to get tougher at almost the exact same pace as you, and the character upgrades ultimately don't affect the dynamics of the action. When you have a full stock of projectile weapons, you can also trigger a short-lived special attack, a flaming sword in Jack's case, which makes especially short work of your enemies.

Save for a few boss encounters that can take a few tries to get the timing down, most of the enemies here, which include regular pirates, undead pirates, samurai warriors, Viking ghosts, and elemental sand monsters, are a bunch of softies. It can get a little hectic when you've got a half-dozen enemies surrounding you, but the game is pretty liberal with special health-imbuing treasure chests and barrels for you to restock your projectile weapons, and most of the levels are pretty short. The eventual monotony of the constant hacking and slashing is occasionally mitigated by stuff such as cannon battles, on-foot chase sequences, and short-lived timing and endurance minigames. Also, the game itself is over really quickly, and a determined afternoon session could make short work of it. There are hidden collectibles that the game lamely tries to lure you back with, but it's just not enough.

The Legend of Jack Sparrow doesn't have the most spectacular or even-keeled presentation either, but it's not without its moments. Jack's in-game animations, while sometimes distractingly choppy, often give off an appropriately swaggering air, and just watching his idle animation, you wouldn't be too surprised if he fell over. Alternately, Will Turner's animations snap with the grace and sharpness of someone who has dedicated themselves to the art of swordplay. The environments are kind of small, with too many flat, grainy textures, but for the most part, they accurately capture the kind of theme-park feel of the film. Comparing platforms, the PC version looks a little cleaner than the PlayStation 2 version and features shorter load times to boot, though the default keyboard controls are so arcane that it all but demands that you play with a gamepad. Curiously, though, we could find no options to tweak the resolution in the PC version or any options for adjusting the game's graphical quality.

Johnny Depp's performance, while not as drunkenly giddy as it should've been, definitely adds some authenticity, and though the voice actors that provide pipes for Orlando Bloom's, Keira Knightley's, and Geoffrey Rush's character aren't always spot on, they do an honest job, and it ultimately doesn't distract. The game fills out the action with lots of clanging swords, death knells, and a rousing soundtrack that, while repetitive, gets the job done.

In comparison to the source material, Pirates of the Caribbean: The Legend of Jack Sparrow is a largely unremarkable affair with a few clever ideas that don't really get exploited to their full potential. It's mostly competent as a simple beat-'em-up, and fans of the character might get a rise out of it, but the experience is too short, the gameplay too simple, and the presentation too uneven for it to be recommendable to most. 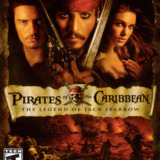