Pirates of the Caribbean: Dead Man's Chest for the Game Boy Advance is an interesting game that's on the brink of actually being good. Its blend of 2D action adventure elements, ship-to-ship combat, and some light RPG elements, all wrapped up with a linear mission design couched in an open world that you can explore as you please, is conceptually enticing. In practice, though, the gameplay is ham-fisted and often frustrating, and the whole experience is far too brief.

Though all three versions of Pirates of the Caribbean: Dead Man's Chest take a certain liberty with the borrowed narrative of the motion picture of the same name, the GBA version really makes the most of that liberty. Naturally, you'll play as Jack Sparrow as he contends with the seabound undead pirate Davy Jones, and you'll go through some of the broader motions of the film, but the game is much more interested in letting you live the pirate's life of raiding, pillaging, plundering, and otherwise pilfering your weasely black guts out, and at virtually any point you can choose to put the story on hold as you explore the Caribbean in your ship, the Black Pearl.

It's fun to be able to cut loose and get up to some unsavory business as you please, but it can play havoc with the pacing of the storyline. As you sail about the Caribbean, whether you're trying desperately to lift Davy Jones' curse or you're simply enjoying the pirate's life, you'll have to regularly make birth at various island ports, which invariably sports a tavern where you'll hear rumors about treasure that, if found, can grant you new abilities. Such treasures can make for much easier going, though they're not actually necessary, and it's likely you'll find several of them as you just go about your business. If you do decide to just skip the treasure-hunting altogether, though, you'll find that Dead Man's Chest is incredibly short, and you can finish the main story in just a few hours, which is detrimental to the game's lasting value.

Most of the time, Pirates of the Caribbean: Dead Man's Chest for the Game Boy Advance has you leaping about platforms suspended in midair, crossing swords with British troops, cannibalistic island natives, other pirates, undead pirates, and inexplicably antagonistic wildlife, and plundering treasure chests. These parts feel tired and clumsy, as it's a style of gameplay that's been around literally for decades, and it's been done with far more finesse. The level designs are often outrageously contrived. Platforms that seem to float in thin air might still work in another setting, but here it just looks ridiculous. There isn't a good sense of weight to the jumping, and movement is too imprecise and sluggish for the dominantly sword-based combat, which is made worse by the fact that all of your enemies appear to be much more nimble than you. Enemies are also equipped with a force field or poisonous skin or something, because every time you bump into an enemy, it knocks you back several feet and diminishes some of your health, which can be quite aggravating when you're struggling against the controls to land on a narrow platform, only to be knocked off by a roaming enemy. This kind of machination would be more easily overlooked in a more fantastical setting, but it just seems peculiar and out of place in Dead Man's Chest. Things arguably get more interesting as you gain additional abilities, which also mitigate some of the inherent clumsiness, but it's still less then ideal.

These side-scrolling sections take place on various islands scattered across the Caribbean, and instead of just magically transporting you from one location to the next, Dead Man's Chest puts you at the helm of the Black Pearl and has you sail there yourself. As you sail, you'll see other ships in the water, and if you get too close to them, you'll initiate a battle sequence. Here you can use your cannons and an arsenal of specialized munitions to either sink the ship or wear it down to the point that you can forcibly board it and plunder any of its riches. Money that you pick up here, or during the action adventure sections, can be put toward new equipment for Jack and the Black Pearl, as well as food and drink for your crew, which is prone to mutiny when it gets hungry and/or thirsty. The naked piracy offered in the seafaring bits of Dead Man's Chest is just delightful, though it's unfortunate that, once boarded, most ships have identical floor plans, and the consequences for failure are nominal. Whether your crew mutinies or you sink your ship, the game just puts you back into the easily escaped prison level from the start of the game, with the Black Pearl back in tip-top shape and your crew having forgotten about kicking you out of command.

As much as it fails with regards to the core gameplay, Dead Man's Chest presents the adventure in a far more successful way. The side-scrolling sections suffer a bit from repeating backgrounds and enemies, but it all comes with a good attention to detail, and Captain Jack himself moves with a certain fluidity. Out in the open water, the look is a little less refined, but no matter where you go, the game maintains a somewhat grungy feel that's authentic to the films. The game also uses a Hans Zimmer-inspired score that puts in a lot of work to give the game a real adventurous feel, and it's pretty successful to that end.

While the PSP and DS versions of Pirates of the Caribbean: Dead Man's Chest seem mostly content to pantomime the film, the GBA version takes a far more interesting route and lets you just be a pirate, which is an exciting promise indeed. Dead Man's Chest is full of promise, which is really what makes its awkward action and fleeting story mode that much more disappointing. 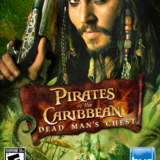 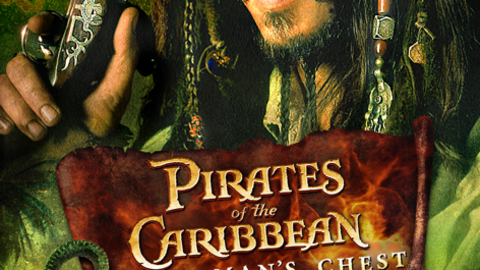 Pirates of the Caribbean: Dead Man's Chest is an action adventure game based on the sequel to the Disney film starring Johnny Depp as Captain Jack Sparrow.

7.2
Sign In to rate Pirates of the Caribbean: Dead Man's Chest