One part dark struggle for survival and one part cute fairy tale, Pikmin is an engaging game with the twisted charm found in a good Tim Burton movie.

Pikmin is likely to surprise gamers who have become comfortable with Nintendo's recent image as a cute factory. Nintendo's recent hits, most notably Pokémon, have ventured deep into "cute and cuddly" territory, but the company actually used to have a slightly dark streak, as evidenced by the Metroid games. With Pikmin, it looks as though Nintendo has managed to create a successful marriage of the two disparate elements. One part dark struggle for survival and one part cute fairy tale, Pikmin is an engaging game with the twisted charm found in a good Tim Burton movie.

Pikmin's story will put you in the role of the bald and bulbous-nosed Captain Olimar. After an asteroid hits his ship, the Dolphin, he's forced to crash-land on a strange planet. Assessing the damage, he realizes he's stuck--unless he recovers the pieces of his ship that broke off during the crash. To make matters worse, his space suit's life support will fail after 30 days. However, just when it looks like he'll be pulling a Tom Hanks in Cast Away without the happy ending, he stumbles upon some native life that may just save the day. Sprouts dispensed from a large onionlike creature yield small creatures that Olimar dubs "Pikmin" after a carrot from his homeworld. These little fellows seem quite taken with Olimar and do his bidding without question. His unlikely helpers in tow, Olimar sets out to rebuild his ship and get off the planet before his time runs out.

While Pikmin's story might be a bit twisted, the game's control is straightforward, featuring an elegant control setup. You'll move Olimar with the analog stick, and you can adjust the camera with the triggers and Z button. The L trigger rotates the camera behind you, the R trigger cycles between three levels of zoom, and the Z button cycles between two angles: three-quarters and an overhead view. The A button picks planted Pikmin and throws them depending on the situation, and if you hold down this button, the Pikmin will line up according to their color. When you have no Pikmin under your control, the A button lets Olimar perform a punch, which can damage pellet posies that hold pellets and yield more Pikmin when they're absorbed by the onions. The B button lets you call Pikmin by whistling, and a concentric circle that grows larger the longer you hold the button shows you the area in which your call is effective. The Y button calls up a map of the stage you're in, showing Pikmin as dots and pieces of your spacecraft, which look like stars. The X button dismisses the Pikmin under your control and separates them by color. Finally the C stick lets you control the group of Pikmin around you and affords slightly better control in certain situations.

Gameplay in Pikmin appears to be as basic as the control, but it's a deceptive impression. While you'll basically be exploring each level in search of ship parts and the onions that give you access to new Pikmin in the space of one day, there's quite a bit of strategy involved. While some have described the game as a kind of RTS, that assessment doesn't quite capture what the game has to offer. The different colored Pikmin--red, yellow, and blue--each have different attributes that you'll often need to use in tandem to open an area and gain access to a ship part. Reds are immune to fire and are the best fighters on land. Yellow Pikmin are the lightest variety and can be thrown higher and farther than the other two, and they can also carry "bomb rocks" whose explosive properties are vital to taking down rock walls. Finally, blue Pikmin are the only variety of Pikmin able to survive in water. Outside of their specialized abilities, all Pikmin can create bridges and platforms in the game by "building" them. Pikmin can become more efficient by "evolving" into advanced forms. They can evolve by ingesting the nectar obtained by pulling up long grass or staying in the ground for a while after the onions sprout them. While they begin life with small leaves above their heads, they can evolve into buds and flowers. The flower form is the most advanced of the forms and lets the Pikmin run and work much faster. At the end of each level, you'll see Olimar's ship's log, which will contain information on his discoveries in that level or tips on how to defeat a creature that you encountered.

Outside of physical obstacles and hazards such as fire and water, you'll also have to find ways of dealing with a variety of predators in the areas you explore. Burrowing insects, enormous ladybug creatures, and others that are odd amalgamations of creatures, like a worm with a bird's head, all pose hazards to Olimar and his posse. An onscreen health meter helps keep you from being taken out of the action, which results in your losing a day while Olimar recovers. Sadly, your Pikmin won't be as lucky--not very hardy, these little guys will drop like flies when they're set on fire, left to drown in water, stomped, or eaten by an enemy. To their credit, they don't go down without a fight--Pikmin are your sole source of offense against aggressive creatures and can take down just about anything if there's enough of them, resulting in a ghostly form leaving the body of the deceased when successful. You're allowed to have a max of 100 Pikmin in your control at one time, so, although there will be some casualties, you'll make it through. As you collect more parts to your ship, you'll be able to explore areas beyond the initial two you find in the game. All told, you'll have five areas to explore. Like the gameplay, the areas are deceptively simple, featuring careful design that forces you to use your head and your Pikmin to fully explore.

Graphically, Pikmin is a pleasing mix of incredibly detailed graphics that are nearly photo-realistic with a healthy dose of "cute" in the form of Olimar and the Pikmin. The five areas you explore are a mix of a standard garden setting with more exotic-looking locales. The game maintains an organic look throughout, with most structures being made up of plants, rock, and wood. You'll find the occasional rusty can as well. Water is impressively done, offering a good bit of eye candy. Awesome textures and subtle lighting, which reflect the passage of time in the outdoor areas, are both used to good effect. In the underground area, you'll see a luminescent glow coming off mushrooms as well as the illumination from Olimar's ship. Great-looking on a normal television through AV or S-video, the game makes another case for a TV upgrade, as it's stunning via component cables on a progressive scan TV.

No slouch in the sound department, Pikmin offers a wealth of ambient sound to reflect the various settings. The game's soundtrack is simple and a bit plain, but it works for the game. Music cues will keep you informed of Pikmin progress outside of your line of sight--leave a batch to build a bridge, and you'll hear a chime when they've completed their task.

The only real complaint about the game is its length. The 30-day limit makes for a rather short playing experience--most gamers will finish the game in a day or two. The addition of a challenge mode that tracks how many Pikmin you can raise in a day on any of the five levels is a nice addition, but it would have been nice to have a few more levels to explore. The bonus of the length is that you may find yourself replaying it to test out new ways to play through the game.

Featuring slick graphics and addictive gameplay, Pikmin is a fresh entry in the GameCube software library--and one that gamers should definitely check out. It's an original game that showcases the GC hardware and Nintendo development prowess, and its different and slightly dark tone suits it perfectly. If you're looking for a cool game to show off your system, you should pick it up. 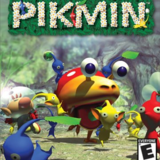