This is a fun version of the beloved game of quick sketches and crazy guesses, provided you've got the hang of drawing with your tablet peripheral.

The board game Pictionary celebrates its 25th anniversary this year, marking a quarter-century of bringing people together in a test of drawing skills, guessing acumen, and patience. The latest incarnation of this classic game uses the uDraw GameTablet to let players draw their clues using a plastic stylus and pad and see them appear on their television screens. The peripheral works well and offers you many more tools and colors than you are likely to need, though it's advisable to spend some time familiarizing yourself with the tablet before jumping into a game. You can choose the traditional Pictionary mode or the wackier Pictionary Mania, and both offer the kind of wholesome, whimsical merriment that the board game has been inspiring for years, providing you have the required minimum of four players. It doesn't have much to offer solo players, but once you get some tablet-savvy folks together, Pictionary serves up plenty of sketch-fueled fun.

In fact, just about the only thing a single player can do in Pictionary--aside from staging sad solo games--is mess around in the drawing studios. Free Draw gives you the whole screen as a canvas, while Team Banner mode lets you craft smaller drawings for use during actual games. Spending some time in Free Draw is a great way to get accustomed to the uDraw GameTablet. The actual drawing surface is about the size of three Wii Remotes laid side-by-side, and the position of your pen on the tablet corresponds to the position of your cursor on the screen. You may be initially disoriented by the instinct to treat the cursor like a mouse pointer, but it's not tough to get the hang of the tablet-to-screen relationship. You must also adjust to pressing a little harder to draw than you might normally press because your strokes only register if you depress the tip of the stylus with enough pressure. Again, there is a small but significant initial barrier, but with a little practice, you can be drawing with something close to your actual skill level.

Once you have at least four people on hand (each team needs to have one person to sketch and at least one person to guess), you can jump into a proper Pictionary game. You can play with two, three, or four teams and choose to play a normal (100 percent of the board), short (75 percent), or shortest (50 percent) game. You progress by correctly guessing the clue that your teammate draws within an agreed-upon time limit and then rolling the die to advance your piece. As you pass the tablet around, the sketchers can choose whether they want adult or junior clues. These designations do not refer to the difficulty of the clues, but rather, the kind of category that is given as a hint. Junior clues ("At grandma's house") are often more descriptive than the traditional adult ones ("Object"), and you can always select a new clue if someone sees the first one. Pictionary relies in part on the honor system, requiring guessers to look away from the screen when the sketcher peeks at the clue, as well as relying on the sketcher to hear the correct answer and choose the right menu option. There are other rules included in the manual (the sketcher can't talk or use letters, for example), and it's best to reach a consensus about how the rules will be enforced before playing.

Deciding the house rules has always been part of Pictionary, and you still need to determine for yourself whether a guess of "Santa cap" counts for "Santa hat." The tablet drawing tools present a new wrinkle that is also something you should agree on at the outset. You can choose from a pencil, crayon, or spray-paint tool, among others, and adjust the tip size for broader or finer strokes. You can erase, fill, undo, redo, clean the slate, and choose from 47 colors. These tools are all fairly straightforward, though it's unlikely you'll use them all in the short window of time you have. The shape tool is where things can get tricky. This tool allows you to make squares, circles, lines, and other shapes. When you put the stylus to the tablet, one point of the shape is created. You then grow, shrink, and maneuver the shape to your liking and release it to set it on the page. It is possible to use this motion effect as a rudimentary animation, as seen in the embedded gameplay video above. Whether you think this is foul trickery or clever ingenuity is up to you and your fellow players to decide.

The opportunities for similar novelty are better (and less contentiously) explored in the other main game mode, Pictionary Mania. The basic structure of the game remains the same, but the clue types always involve some sort of challenge for the sketcher. Some are as basic as drawing with your eyes closed or using your nondominant hand to sketch. Others take advantage of the digital medium by only allowing you to draw straight lines or shapes, steadily rotating the drawing area, or limiting the amount of ink at your disposal. None of these conditions is prohibitively difficult, and they are in keeping with the lighthearted nature of Pictionary. Whether impressive, disastrous, or somewhere in between, the range of drawing and guessing skills on display is sure to entertain, and adding goofy conditions into the mix only adds to the fun.

This video game version of Pictionary is not just a faithful translation of the original, but it also throws in some enjoyable new elements that encourage players not to take the game too seriously. The audiovisual presentation is nothing to write home about, but it's cheerful and innocuous enough to allow you to focus on the real visual treat: your own drawings. This is a fun way to play Pictionary, but it does cost a lot more than the board game. To play, you need to buy the uDraw GameTablet with uDraw Studio ($69.99) and then a copy of the game itself ($29.99). This may prove too high a price barrier for many, and though the initial learning hump isn't large, it presents more of an obstacle to enjoyment than simply drawing with a pen and paper. Still, there's a lot to like here, and if you're looking for a social way to enjoy your tablet peripheral, Pictionary is no-brainer. 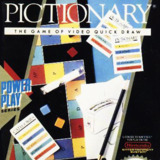