Picross DS is a high-quality collection of logic puzzles at a terrific bargain price.

Picross, short for picture crossword, is a puzzle not entirely unlike Sudoku, in that it forces you to use logic to deduce the particulars of the puzzle. But rather than focusing solely on numbers, Picross has you using numbers to determine which boxes in a grid get punched out to eventually form a picture or a pattern. With a ton of puzzles to keep veterans busy and a helpful tutorial mode to get new players up to speed, Picross DS is the sort of game that will keep you staring at your Nintendo DS long into the night.

The grids vary in size, starting with very simple 5x5 grids. Numbers mark each row and column, and they tell you how many blocks, in a row, are part of the puzzle. So in the starting small grid, seeing a "5" next to a row or column would mean that each block needs to be punched. Seeing a "3" means only three, and seeing something like "1 3" would mean that there's one block, followed by one or more blank spaces, then three more connected blocks. By seeing how the numbers form up and deducing which spots must absolutely be punched for the hints to make sense, you eventually work your way around the grid and complete the puzzle. Those small grids get larger as you play, eventually leading you to huge 25x20 grids. The game's normal mode runs on a timer, giving you 60 minutes to complete each puzzle. That's usually more than enough time, but as you make mistakes, penalty minutes are packed onto your time. There's also a free mode, which runs without a time limit, but it also doesn't let you know when you've made a mistake, only when you've completed the entire puzzle. These, as you might expect, get tricky fast.

The game's a natural fit for the DS touch-screen controls, but unfortunately they start to become very cumbersome as the grid size increases. You'll eventually have to deal with zooming in and out to better see parts of the larger grids, which isn't ideal. For the later, larger puzzles, playing with the control pad and buttons might actually be faster.

In addition to playing the single-player mode, you can go in and create your own puzzles, which can be sent to other players locally. There's also an online mode where you can download additional puzzles (though none are available as of this writing), and a head-to-head mode where two players try to solve two 10x10 grids. The fastest player wins, and if you can't finish two 10x10 puzzles in two or three minutes, chances are you're going to lose. It takes what can be a very casual puzzle experience and makes it totally hectic, and also a great deal of fun. There aren't any leaderboards, but your own personal win/loss record is kept, and you earn different ranks as you play. Locally, you can play with up to five players using only one cart. You can also send demo puzzles to other nearby players without a copy of the game.

By offering a ton of puzzles to play alone and the constant challenge of online play, Picross DS is a long-lasting puzzle game and an awesome value at $19.99. If you're already a fan of logic puzzles like Sudoku, this might just be your next brain-teasing habit. 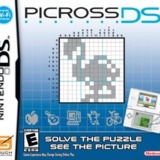 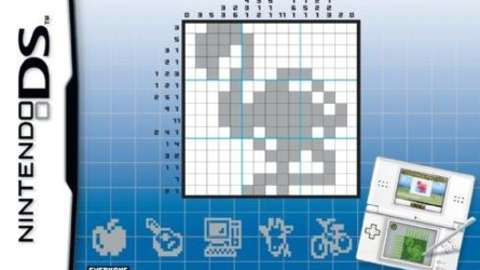 Use puzzle-solving skills and creativity to earn your picture reward.