The fact that you get three games of great length and quality on one cartridge makes Phantasy Star Collection well worth the price of admission.

For the generation of gamers that grew up with the PlayStation as one of their first consoles, the only Phantasy Star game that will likely be familiar is Phantasy Star Online. Some of these players may be surprised to discover, then, that the series actually dates back to the late '80s and has had four other installments, all very different from their online counterpart. RPG fans, on the other hand, recognize Sega's long-running series as one of the best ever, what with their epic storylines, memorable characters, and impressive graphics and music. While these games have rarely had any solid connection to each other, they all share a common theme that flawlessly combines both fantasy and science-fiction conventions. For those who have never played these fantastic games, or have simply lost touch with them, Phantasy Star Collection for the Game Boy Advance is the ideal way to experience them. This pack contains the first three games in the series in their original form, and for the most part, they've aged surprisingly well.

The first Phantasy Star game originally appeared on the Sega Master System, while Phantasy Star II and III made their home on the Sega Genesis. The fourth Phantasy Star game is not included in the pack, which is disappointing, since series fans tend to agree that Phantasy Star IV is an excellent installment, and much better than III. Phantasy Star Collection also doesn't include two games that appeared on Sega's Game Gear portable and were released only in Japan. So while it would be incorrect to call this a complete compilation, the sheer amount of gameplay that you'll be able to get out of the three lengthy RPGs featured here is staggering, to say the least.

To put this compilation together, Developer Digital Eclipse coded two separate emulators specifically for the Game Boy Advance--one for the Master System, and another for the Genesis. Both systems are emulated to near perfection, and the games are virtually identical to the originals. Those familiar with the series may be able to pick out a few minuscule differences in the background music, but aside from that, Phantasy Star Collection successfully brings the engaging experiences of these games to the GBA without sacrificing anything. In some ways, the emulations are actually a bit too faithful to the original versions, as it would have been really helpful if the games had allowed you to save your progress anywhere or switch to sleep mode. As it is, none of the Phantasy Star games are exactly well suited to quick, casual gameplay sessions.

As mentioned above, these three games are all different in terms of story and gameplay. The original Phantasy Star features a young female protagonist named Alis who's on a quest to avenge her brother's death. This game pushed the Sega Master System to its limits with its beautiful hand-drawn and hand-animated sprites and pseudo-3D dungeons, which really set it apart from other similar games of the era. Phantasy Star II takes place after the events of the first game, in the same star system but during a largely different era. The game has a decidedly more futuristic feel to it, and the 3D dungeons are gone. Again, though, you'll play as a young character who eventually must confront an evil force threatening the entire star system. The last game in the collection, Phantasy Star III, was unlike any other game in the series, as it took place over several generations and offered a number of different endings, depending on the paths you chose during the course of the adventure. Of all the games in the series, this game is considered to be the weak link, but it's still a solid game--just not as great as the other two games in the collection.

Since these games all originally appeared on 8-bit and 16-bit consoles, you'd expect the graphics and sound to be slightly behind the times. This is true, as the technical aspects of Phantasy Star Collection aren't really on par with some of the games that are developed specifically for the GBA. Yet when you consider exactly how close these GBA ports actually are to the source material, the feat of cramming these three games into one tiny cartridge comes across as admirable. Longtime fans of the series will definitely be pleased with the results, and it's worth mentioning that all three of these games originally retailed for about $70 each.

You could easily spend dozens of hours with any of the games in this collection, so the fact that you get three games of great length and quality on one cartridge makes Phantasy Star Collection well worth the price of admission--there simply hasn't been a Game Boy Advance game with this much gameplay to date. Aside from the fact that these games aren't necessarily well suited to gaming on the go, and notwithstanding a few small shortcomings in the emulations, this cartridge is perfect for any fan of console role-playing. In fact, fans of RPGs owe it to themselves to add this game to their collection. 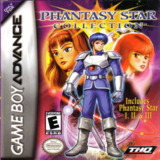