The shackles are off for Pro Evolution Soccer 2019. No longer burdened by an obligation to develop for the previous generation of consoles, PES 2019 feels like the beginning of an exciting new era for Konami's long-running football series. The visuals have received a much-needed overhaul, while the on-pitch action has been tightened up, refined, and improved. The series’ lack of impactful licenses and insipid UI and commentary are issues that persist, but PES 2019 builds on what was already a runaway title winner to set a new high bar for the series.

The improvements to PES's superlative brand of football initially appear trivial, like Konami simply slapped a new lick of paint on last year's game. It still adopts the same methodical pace, tangible sense of weight, and breadth of passing as PES 2018, but after a couple of matches you begin to notice subtle changes that gradually add up. The impact of another year's worth of development becomes palpable.

Passing is, of course, the bedrock of any great football game, and PES 2019 enhances its passing dynamism with a plethora of new animations, bringing each kick of the ball to life with startling accuracy. Players are intelligent enough to contextually know what pass to play and when, giving you a greater sense of control over each passing move. If you're receiving the ball under pressure from a burly centre-half, you'll have the confidence to know you can potentially flick the ball around the corner to an overlapping winger or deftly play it back to a midfielder so he can knock it into space with the outside of his boot.

There's an impressive variety of passes in any one match, while the fluidity of the players' movement and the responsiveness behind each button press lead to moments of scintillating football--whether you're patiently building from the back, carving a team open with a clinical counter-attack, or hoofing it up to your big target man. PES's passing mechanics have been so accomplished for so many years now that there's always been a singular pleasure in simply shifting the ball between teammates. That outstanding feeling has only intensified in PES 2019.

Ball physics have been reworked and greatly contribute to this, too, making that little white sphere feel considerably more like a separate entity than ever before. It never appears as if the ball is rigidly stuck to your player's feet, nor are your passes laser-guided to their target. There's an authentic flow and unpredictability to the way the ball moves, curling and dipping through the air, spinning off a goalkeeper's fingertips, and neatly coming under the delicate control of a player like Mesut Özil. No one would blame you if you hopped into a replay just to ogle the ball's flight path and the animation that preceded it. Sending a diagonal pass to the opposite wing just feels right, and this excellence emanates out to each aspect of PES 2019's on-pitch action.

Players are more reactive off the ball and make smarter runs, pointing to the space they're about to sprint into to let you know when to unleash that inch-perfect through ball. There's more physicality to matches in PES 2019, too. Hurtling into a tackle and fighting tooth-and-nail to win the ball back with a defender is much more active and satisfying as a result. Players will jostle for position, realistically clattering into each other, and it feels rewarding to barge an attacker off the ball, or hold off a defender with a diminutive winger, before using a feint to create some space and escape their clutches.

Executing feints, step-overs, and other skill moves is intuitive, with each one mapped to the left and right sticks. There are few better feelings in PES than leaving a defender for dead with an eye-opening piece of skill, and this feeds into an added emphasis on player individuality. Cut inside with Lionel Messi and he's liable to flick the ball over the outstretched leg of a defender, using his low centre of gravity to peel past them, before rasping a left-footed shot into the bottom corner of the net. Meanwhile, someone like Paul Pogba will saunter around the midfield, finding pockets of space and using his large frame to maintain possession, while Roberto Firmino will occasionally bust out a no-look pass, and Cristiano Ronaldo will hang in the air on crosses for what feels like eternity, or smash in a dipping 30-yard screamer that has the 'keeper rueing his luck. PES has a recent history of making both its players and its teams feel unique, and with a deluge of superb new animations, PES 2019 is no different.

It's not all roses, however, as it does still share some of the more disappointing aspects of its predecessors. Referees, for example, are maddeningly inconsistent; both too lenient and too harsh in the same match, while match presentation is bland and lifeless. A new naturalistic lighting engine produces some stunning sights, casting realistic shadows across much improved grass and crowd textures. But the UI surrounding it still feels trapped in the past, and stalwart commentators Peter Drury and Jim Beglin return with the same disjointed dialogue we've come to know and hate, with little in the way of new lines. Drury will still get overly excited by tame shots, and there's only so many times you can listen to Beglin say "If you don't speculate, you won't accumulate" across multiple games before you're tempted to turn the commentary off completely.

Some of the teams that are officially partnered with PES get the red carpet treatment, with recognisable chants and an authentic atmosphere permeating every home match. Play with Liverpool at Anfield and the kop will belt out "You'll never walk alone" before the match begins. On the flip side of this, teams with no official ties to PES receive canned crowd noises and indecipherable chants that rob these games of any ambience. This isn't terrible, but after showing a more accurate depiction of a Saturday afternoon matchday, the lack of a distinct atmosphere in these games can't help but feel like a downgrade.

Disappointingly, Master League remains almost untouched. The International Champions Cup debuts as a short pre-season tournament, and transfer negotiations have been slightly reworked, giving you more flexibility when it comes to player fees and contracts. You can now include clauses like clean-sheet bonuses and sell-on fees so there's not just a lump sum involved, but AI transfer logic still isn't particularly smart. Budgets and fees don't replicate the reality of the transfer market, with much smaller numbers than the astronomical prices we've seen players going for in recent years. It's possible to buy a player like Aymeric Laporte for £12 million a mere six months after Manchester City splashed out £57 million for the central defender in the real world.

At least goalkeepers have finally seen some enhancements. They're essentially useless when rushing off the goal line, regularly failing to close down an attacking player's angles, but this is where the faults end. Each number one's ability as a shot stopper has seen a marked improvement. Just like elsewhere on the pitch, goalkeepers have been blessed with a range of new animations that banish their previously robotic nature. They'll pull off some eye-catching saves, getting fingertips to shots destined for the top corner, or just generally making themselves as big as possible in order to get something, anything, on an incoming shot.

You'll need your 'keeper to be on top form in the latter stages of a match, too. The stamina system in PES 2019 has been reworked to place significantly more importance on your players' fitness. This has been dubbed "visible fatigue," and it does exactly what it says. Run a team ragged and their midfield and defence will visibly tire as the match wears on, potentially opening up space for you to exploit with fresh legs off the bench. This isn't a one-way street, though, as you'll need to be mindful of your own players' stamina as well--your star midfielder isn't much use if he can barely muster a light jog. This forces you to play a more considered game of football, sprinting only when it's absolutely necessary and making timely substitutions when the situation calls for it. This is a literal game-changing feature, and it wonderfully complements PES's brand of authentic, methodical football.

It's a shame, then, that PES is still trailing FIFA when it comes to official licensing. Losing the Champions League and Europa League licenses to the EA behemoth is a massive blow for PES. To Konami's credit, it has responded by obtaining more licensed leagues than ever before, with the likes of the Scottish Premiership, the Russian Premier Liga, and Superliga Argentina all being featured in their official forms. They're certainly welcome additions, but these aren't standout leagues that are going to move the needle the same way the English Premier League or La Liga would. If you want to play in the Madrid derby you're still stuck choosing between KB Red White and MD White, and the Bundesliga is completely absent beyond Schalke 04 and Bayer Leverkusen, meaning two of Europe's biggest clubs--Borussia Dortmund and Bayern Munich--are nowhere to be found. Thankfully, the PES community does an amazing job creating update files if you want to mod in the teams, players, and kits that are missing, but you're out of luck on Xbox One where this isn't possible.

PES 2019's online servers are surprisingly stable, considering the series' history of troubled connections. We didn't encounter any noticeable latency across dozens and dozens of online matches. Meanwhile, myClub introduces a few changes to its Ultimate Team-esque formula. Featured Players are now released each week, with outstanding performances in the real world translating to attribute boosts in PES. The way you attain new players has changed, too, with players bundled in packs of four as opposed to the single player you would get in previous iterations of the mode. This lets you build up your squad faster or turn these additional players into XP trainers that can boost some of the key players in your team. If you receive three duplicates of the same player, you can also combine them together to get a higher-rated version of that player. Ultimately, these tweaks don't alter the structure of myClub too much, but it's a fun mode to engage with purely to play more of its outstanding brand of football.

For as long as EA continues to develop FIFA and hold a monopoly over official licences, PES will be the scrappy underdog just hoping for a surprise upset, even when it's fielding the likes of London Blue and PV White Red. The lack of licences for top-tier leagues remains a disheartening sticking point, but PES continues to make brilliant strides on the pitch, building on what was already an incredibly satisfying game of football to produce one of the greatest playing football games of all time. It might be lacking off the pitch, but put it on the field against the competition and a famous giant killing wouldn't be all that surprising.

View Comments (43)
Back To Top
9
Superb
About GameSpot Reviews 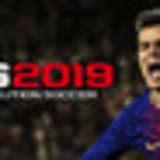 Richard has been playing PES since the good old days when it still had the International Superstar Soccer moniker. So far he's spent around 30 hours on PES 2019, with many more to come. Complimentary review code was provided by Konami.