IMPORT: Persona 2: Innocent Sin is a rare gem in today's RPG market - despite the popularization of the genre, it's stayed true to its offbeat roots to deliver a story, setting, and style unlike anything you're likely to have played before.

IMPORT REVIEW: In late 1996, the United States was treated to Persona, the first game in Japan's long-running Shin Megami Tensei series to be translated. While somewhat unpolished, Persona sported a visual and gameplay style all its own, as well as an incredibly bizarre story. Three years later, the first of two sequels arrives in Japan, building on the first title's successes and creating new ones all its own. In today's world of cookie-cutter fantasy RPGs, Persona 2: Innocent Sin is a nearly flawless excursion off the beaten path.

What happens when rumor becomes reality? Three years after the events of the original Persona, a seemingly harmless curse has befallen Sumaru City. Placed on the city by the malevolent and mysterious Joker, the curse is punishment for a sin no one remembers. A ragtag team of high-school students must prevent the Joker and his evil minions from collecting enough human dreams to open the Gate of Heaven as the students uncover their own dark, forgotten pasts. The road to Joker is long, and the resourceful students will have to twist the curse to their own benefit and ally with the forces of darkness in order to succeed. Like its predecessor's, Persona 2's story is darker, stranger, and more involving than most of the fluffy fantasy fare crowding today's marketplace.

Right off the bat, Persona 2: Innocent Sin is not your father's RPG. As opposed to the comically stereotyped spiky-haired fantasy protagonist, we're given Tatsuya, a round-haired, cell-phone-carrying student of Seven Sisters High School. Joining him are three other high-school students and Persona's Yuki. As before, each character is uniquely humorous and immature, from Mishina's constant attempts to womanize to Maya's delightfully broken catchphrase, "Let's Positive Thinking!" However, each character has a darker side, explored throughout a number of the game's quests. What sets these five youngsters apart from the rest of their friends is the ability to use "persona," which causes powerful spiritual manifestations of their true selves. Beyond Persona 2's characters are its setting - Sumaru City is a modern-day bustling metropolis, complete with casinos, gyms, and concert parks. Presented entirely from a three-quarters isometric perspective, Persona 2's world is detailed, simultaneously embracing realism and nightmarish psychedelia.

Persona 2's battle system builds on some aspects of the original but simplifies others. As before, your characters can summon their personas for magical attacks or join the fray themselves with their attack. However, characters no longer have both blades and firearms at their disposal; instead, they just have one weapon unique to them. Tatsuya expertly wields a sword, while Mishina always a carries a stylish guitar case that contains a machine gun.

Like the rest of the games in the Megami Tensei series, Persona 2 lets you negotiate with the demons you encounter and, with a little luck, woo them to your side. Each demon has its own personality, and each member of your party has a number of conversation tactics to pander to the demons' various personality traits - Maya's interviewing skill, for example, is perfect for stupid, short-tempered demons. By piquing a demon's interest, you'll be awarded with tarot cards.

This game contains a simplification of the system found in the original Persona; collecting enough of the same type of tarot card is enough to summon new personas - the higher the persona's level, the more tarot cards it requires. To keep this in check, new personas open up as you progress through the game, and you can only summon and equip personas that are within a maximum five experience levels higher than your highest level character. Once summoned and equipped, personas gain experience and spells through repeated use. Summoning a persona always consumes the same amount of MP, regardless of the spell cast, making it advantageous to max out any persona you summon. New to Persona 2 are combination attacks that let you create more-powerful spells by casting spells with certain elemental affiliations in a specified order.

Surprisingly simple and well balanced, the personas initially make the game rather easy - MP regenerates with every step taken, and a low-level persona with healing magic can completely restore your party at almost zero cost. As the game progresses, summoning personas becomes more of a drain, forcing you to rely more and more on your weapons in order to conserve MP.

Like the Dreamcast slasher Maken X, Persona 2: Innocent Sin was developed by Atlus' esteemed R&D1 team. Persona 2 is as polished as one would expect from R&D1 - it's a shame it's not on a more powerful system. As with other R&D1 projects, Kazuma Kaneko once again brings the ultra-mod characters and twisted forces of darkness to life with his super-crisp artwork. While the environments are polygonal, all characters are well-animated 2D sprites. Enemies have a number of inventive and unusual attack animations. Unfortunately, the sprites in battle are often of relatively low resolution, making for some unwelcome, if tolerable, chunkiness. Aurally, Persona 2 is top-notch. Blending excellent rock with ambient and techno, Persona 2's music is almost always appropriate and exciting. Key battles and events feature voices as well, adding dimension to the already-excellent characterizations.

Persona 2: Innocent Sin is a rare gem in today's RPG market - despite the popularization of the genre, it's stayed true to its offbeat roots to deliver a story, setting, and style unlike anything you're likely to have played before. The second half of the Persona 2 saga, Eternal Punishment, is currently scheduled for an English release this coming November - if Innocent Sin is any indication, Eternal Punishment should be quite a treat. 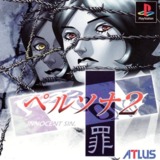 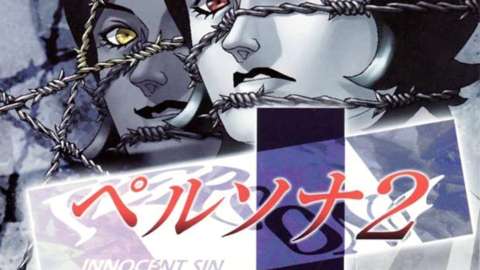