Few games have been more eagerly anticipated than Rare's unofficial sequel to GoldenEye 007, one of the best titles to come out over the last few years for the Nintendo 64 or otherwise. Though Perfect Dark's style and feel might not fall too far from the Bond tree, it's clear that Rare has created another title that alone warrants buying the system.

The premise of Perfect Dark is that you are a special government agent on a near-future Earth. Your agency has made friendly contact with a group of aliens known as the Maians, those big-headed gray little men made popular in Whitley Strieber books and Fox TV specials. At roughly the same time, the evil dataDyne corporation has allied itself with the equally evil Skedar, an alien race that practices war as religion, placing them at odds with the Maians. Thus, conflict ensues, first in the realm of industrial espionage, and then... beyond.

Not surprisingly, the basic structure of GoldenEye 007 remains in Perfect Dark. The first-person shooter is split into nearly two dozen mission-based levels, each with a number of objectives that you must carry out before you exit the stage, such as downloading files from a computer or escorting an ally to your ship unharmed. Each level can be played in three degrees of difficulty, each one adding more objectives to your list while toughening up your enemies considerably. And in between carrying out mission objectives, there are spies to shoot, and this time there are aliens as well.

It's hard for Perfect Dark to appear as impressive today as GoldenEye 007 did when it first came out several years back, because GoldenEye 007 had looked like it would be just another first-person shooter for the console systems, which had seen mainly lackluster ports of PC shooters. However, the game was groundbreaking enough to influence nearly every shooter - console and PC - that succeeded it. Perfect Dark isn't a game that wows you immediately like its predecessor did - its improvements on that title are subtle, at least at first.

The new feature that affects the single-player missions the most is the upgrade to your enemies' artificial intelligence. You'll notice your foes working together to attempt to cover one another. Or duck around a corner for cover. Or wait for you to come back into a room instead of obediently chasing after you. Or run for the gun of a fallen comrade after you've shot the weapon from his grasp, which is another new ability that you have, in addition to grabbing away an enemy's firearm if you're close enough. Both make for moments where you think you are sunk, only to find yourself rearmed and victorious. The converse is true as well, and the bad guys can snatch or shoot your gun away from you too, so there are times when you'll think yourself well armed and suddenly end up empty-handed.

Besides the other, more predictable changes you'd expect - more weapons and items, graphics that max out the system, a soundtrack that's only eclipsed by Nintendo's own Legend of Zelda: The Ocarina of Time - the real appeal of Perfect Dark is its unprecedented amount of replay value. To begin with, Rare has enhanced the multiplayer side of the game with the addition of dozens of different kinds of computer-controlled players, or simulants, each with its own specialty. For instance, the RocketSim goes after any rocket launchers found in a level, the PeaceSim runs around and collects any weapons he can find, and the TurtleSim runs slower than others but has a strong force field around him. The PerfectSim? He's tough enough to give a level a haunted house-like feel, and he's not the only one who can. Even those who have completely mastered GoldenEye 007 will find playing against Perfect Dark's simulants to be a humbling experience.

There are myriad settings you can apply to the multiplayer modes. For starters, there are several gameplay types: the standard deathmatch, capture the briefcase, and king of the hill. You can also play the game singly against simulants, in single-player with simulants against other simulants, with two to four players against simulants, or with two to four players with teams of simulants. Add new items such as cloaking, shields, and the slow-motion-inducing power boost, new weapons such as the fly-by-wire rocket and the FarSight (which can shoot through walls), and the ability to customize what weapons and items appear on a stage, and you have an almost endless number of variations.

Beyond all that, new weapons, simulants, multiplayer maps, and cheats can be opened up by completing the training level's target practice stages and the numerous levels in the challenge mode, where you fight against simulants in an array of prearranged variations. The number of things that you can unlock in the game is simply staggering. There are even options to play through the normal missions in the game with a simulant buddy, in a two-player split-screen perspective with a friend, or against a second player who acts as the enemies (yes, that's plural, since he keeps coming back as long as there are any enemies left standing) in the level and tries to keep you from completing your objectives.

But the question remains: Is it fun? It is incredibly so - every bit as much as GoldenEye 007 and more. As a single-player or multiplayer FPS experience Perfect Dark is unparalleled on the console systems. The game's only real detractions are that the easiest difficulty setting is too easy, which is made up for by the harder settings being fantastic, and the frame rate can be slow at times, which is only really a problem if you're playing with three or four players with a mess of simulants. If you've been playing GoldenEye 007 up to now, you'll be pleased to hear that there's finally a game that has eclipsed it, one with enough to it to keep you playing for the next few years until its inevitable sequel comes around. 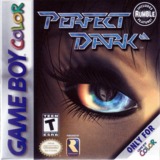