Penny Arcade Adventures: On the Rain-Slick Precipice of Darkness Review

Penny Arcade Adventures is slick with rain, humor, and all sorts of awesome, but it's for fans of the comic's brand of humor only.

If the image of a fruit juicer having its way with a delectable-looking orange seems more offensive than funny, Penny Arcade Adventures: On the Rain-Slick Precipice of Darkness may not be for you. This is not just some generic trash stamped with the Penny Arcade logo; this is the long-running webcomic seamlessly realized in video game form. From the sometimes poetic but mostly vulgar humor to the vibrant art style that somehow drips with both blood and goofy joy, the guys at Penny Arcade have entered the format that they have spent so many years lampooning, and have delivered something that could withstand even their wicked barbs. The chance of it converting detractors of their traditional work is about as likely as that burlap sack containing something other than hobos, but that's to be expected. The Penny Arcade guys made a game just for their fans, and it's really darn good.

When your home is crushed by a giant robot (known as a Fruit Fornicator in polite company), and there are mimes overflowing the streets, who could a person in need possibly turn to? If you're living in New Arcadia, there is only one choice: Gabe and Tycho, founders of the Startling Developments detective agency. Controlling a customizable character decked out in the latest fashions from 1922, you join up with the duo to sniff out the dirty underbelly of this panic-stricken town. The underbelly waffles between smelling like hobo stew, urine, and dead crabs, but that's all in a day's work when you're dealing with fallen gods. Or at least that's what Gabe and Tycho seem to think.

The story is the real star of the show here, but there still has to be some action to string these events together. The combat and light puzzle-solving aspects provide the necessary button inputs to make this qualify as a full-fledged video game, but they exist more as another way to deliver PA's unique brand of humor than something that will lure action fiends searching for their next hardcore fix. Battles are mostly turn-based and, though you don't have a ton of different options to take down your dirty, silent, or mechanical foes, it's still entertaining. The game ensures that you won't zone out during these battles by sprinkling them with the requisite disgusting and/or silly attacks. But what happens when the humor fades? Sure, it's funny watching a person dressed in olde-timey clothes whack a clown with a rake, but how does the game keep you interested after you've already seen your enemies combust into a smear of colorful paint? Action commands, of course. If you hit the right trigger before an enemy attacks (its life bar will flash briefly), you'll either absorb the blow or let loose a counterattack. On the offensive side, the power of your special attacks is determined by how good you are at completing minigames. Tapping A until your thumb turns purple or trying to match your button presses to the corresponding icon may not provide icing on this delicious cake, but at least it adds inoffensive meringue to the lemon pie.

The detective aspects also contain more fluff than substance, but end up happily driving the humor-mobile without any shortage of gusto. Your brain is required only to appreciate the humor, not to solve complex puzzles. Most quests that you embark on simply require the elimination of a specific type of enemy in your immediate surroundings. At other times, you'll have to bring a specifically requested item to a distressed individual. There aren't any puzzles that require you to combine junk to make something worthwhile or even any that make you choose the appropriate item from an assortment of random parts. In short, don't play this if you are craving an old-school adventure game. Though the world is littered with objects that you can examine, taking a closer look will dish out more jokes about New Arcadia rather than give you clues in which to solve this case. This is a game designed to make people laugh; anything that could detract from the goofiness has been left on the cutting-room floor.

This is one of the best-looking Xbox Live Arcade games around. It's no surprise that the 2D cutscenes look just like their Web-based counterparts, but the 3D world in which the majority of the game takes place looks equally impressive. The rain-slick streets are dripping with detail (among other things), and the assortment of new characters radiates just as much personality as long-running staples from the comic. It's a shame that PAA contains only four unique areas; what's there is gorgeous, but there isn't quite enough variety for a 10-plus hour game. The voice work is well done when present, but the hilarious narrator unfortunately clams up after the first act. It's understandable that Gabe and Tycho would communicate solely through speech bubbles, but to do away with the narrator so soon into the journey leaves too many silent junctions where jokes could have been inserted.

If you're still trying to figure out if you should drop 1,600 Microsoft points ($20) on this game, the only real question you have to ask yourself is: Do you like Penny Arcade? Fans of the comic will find more than enough here to justify the sizable price of entry. The rest will find only simple combat and shallow adventuring if the humor doesn't tickle their fancy. If PAA had been able to construct a great adventure game around the fantastic humor, this would be a must-buy for everyone. But in its current form, it will satisfy only the specific niche of people who find PA funny and no one else. 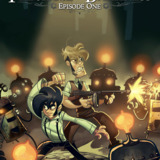