The game, as a whole, is a little too simplistic to hold the interest of most players, eventually relegating Pen Pen TriIcelon to the "especially good for younger players" category.

Finally, a game that truly captures the spirit of, uh, penguin racing. Pen Pen TriIcelon is a triathlon racing game that puts your cutesy animal through three legs: waddling, swimming, and sliding on its belly. The resulting game is mindless racing with sharp graphics and enough gameplay flaws to keep you from wanting to play it for more than ten minutes at a time.

There are eight racers to choose from, including a penguin, a walrus, a shark, and a squid. Each racer has different specialties, speeds, and turning abilities. Also, you can accessorize each of the racers with various hats, shoes, and other little items. More of these items are unlocked as you play the game.

There are four different tracks, each with five different variations. The first variant is rather simple, but the others add in different obstacles. One variant forces you to race against penguin drones, while another puts you in a one-on-one race with one of the other Pen Pens. There is also a time trial mode that allows you to race any one of the tracks (or segments thereof) in a quest for the best time. An up-to-four-player versus mode is also available. There's a bit more pop-up on the split-screen multiplayer, but overall it manages to do a nice job.

The graphics in Pen Pen TriIcelon are surprisingly good. It runs at a nice, high resolution, and the characters all move very well. Also, aside from the walking leg of the race, the game moves at a pretty fast pace. There is some occasional slowdown when all the racers crowd onto one screen while sliding downhill at high speeds, but it's fairly rare.

Playing the game is extremely simple. On the sliding and swimming portions of the race, you simply time presses of the A button to push yourself along with your arms. Holding down the button will cause you to hold your arms back in an attempt to become a bit more aerodynamic. This is useful when sliding down extremely steep hills, but it also makes steering much more difficult. For the walking portion of the race, A becomes a jump button, and B executes a dash attack, which also accounts for the game's most annoying feature. The dash jerks you forward quickly in an attempt to bump your opponents out of the way. If it hits, it usually knocks them aside, but half the time it seems to just bump them ever further ahead of you. And if you miss with the dash, you briefly stop moving (which is there mostly to keep people from simply dashing their way through the entire course). The whole walking segment moves at an incredibly slow, and if you're already ahead by a long shot, boring pace.

It won't take more than two or three hours to unlock all the track variations, as the computer racers don't put up much of a fight. The game, as a whole, is a little too simplistic to hold the interest of most players, eventually relegating Pen Pen TriIcelon to the "especially good for younger players" category. 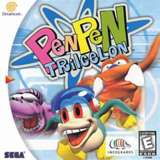 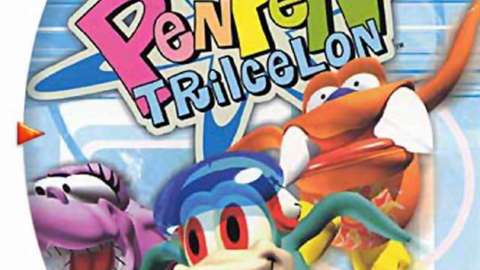 The game, as a whole, is a little too simplistic to hold the interest of most players, eventually relegating Pen Pen TriIcelon to the "especially good for younger players" category.