Like Puzzle Quest before it, Patapon is a game that grabs key features from existing genres, squishes them together like different-colored balls of Play-Doh, and then turns them into something far more special than you might expect. For example, if you combined a ball of red and ball of blue you might expect to get a big lump of purple, while a rainbow-colored re-creation of the Venus de Milo would seem unlikely. But Patapon is just that special. Puzzle Quest's nontoxic, nonstaining ingredients included a Bejeweled-style puzzle component used for combat, as well as a character advancement system and storyline that belonged in a role-playing game. Patapon's recipe, on the other hand, blends rhythm-based controls with a horizontally scrolling real-time strategy game. Then--as if that combo wasn't already enticing enough--it sprinkles plenty of RPG-style gear collection and some fabulous visuals from French artist Rolito on top. In short, Patapon is unlike any game that has come before it, and with a retail price that's half of what many PSP games sell for, our recommendation of this ingenious recipe that has been masterfully realized is a no-brainer.

Developed by Interlink, the same studio responsible for 2006's LocoRoco, Patapon casts you in the role of a deity who is worshipped by the titular tribe. The Patapon have fallen on hard times since being forced from their homeland by the evil Zigaton army, and you're their best shot at ever reclaiming it. Since you've showed up in their hour of need, you've also been tasked with leading the tribe to a mysterious place called Earthend so that they might gaze upon a sacred object known simply as "IT." The Patapon are a tribe of adept warriors, but they're clueless without someone to lead them and won't do anything without first being told to by The Almighty. That's you.

You interact with the tribe using a set of four battle drums, which are mapped to the PSP's face buttons. Orders must be given to the tribe in time with a beat that's constant throughout every mission using different sequences of four drum notes. Simple orders, such as "advance" and "attack," are enough to get you through the early levels. But you'll learn others, such as "charge," "defend," and "retreat" as you progress through the game. Furthermore, you'll learn to use your godlike powers to perform four different weather-changing miracles that can be used to give your archers' arrows a tailwind or to unsettle a boss with an earthquake among other things.

Archers, which are known as "Yumipon" in-game, are one of six different unit types that you'll be adding to your army's ranks as you battle your way toward Earthend. The others, which also have different names that will mean nothing to you, are essentially foot soldiers, spearmen, cavalry, musicians (whose tubalike instruments launch deadly projectiles), and heavies armed with oversized maces or hammers. You can only take three different unit types with you on each mission, and you can use a maximum of either three or six of each of them depending on their size. Inevitably, you'll have favorites, but choosing the correct units for a given level is every bit as important as giving them the right orders once a mission is underway.

The 30-plus missions offer plenty of variety and come in three distinct flavors: hunts, battles, and bosses. Hunting levels are a way for you to gather resources from the occasionally bizarre and mostly harmless indigenous creatures of the Patapon's world. Battles against the Zigaton army are objective-based (rescuing a captured Patapon or escorting a catapult to and then destroying a Zigaton base, for example). Because you get to pick up any weapons dropped by fallen enemies, battles are also a great way to improve your army without spending resources. Boss encounters are the most challenging missions the first time you play them because you need to figure out and memorize the bosses' attack patterns before you really stand a chance of issuing the right orders to your forces in a timely fashion. Bosses modeled after dinosaurs, giant crabs, sandworms, and carnivorous plants make up much of the roster, but even those with similar appearances offer quite different challenges. Furthermore, after beating a boss you have the option to go back to face it over and over again. And it gets tougher each time you do.

Replaying boss levels is fun for a while, and the number of times you can beat a boss is a pretty good measure for the strength of your army. Hunting levels can also be replayed as many times as you like, though they don't get any more difficult and offer no challenge whatsoever after a while. This is unfortunate because hunting levels are the only quick way to earn the ka-ching (Patapon's life-giving currency) necessary to create new units for your army. But replaying them over and over again--which you'll have to do at times--gets old pretty fast. Battle levels are the only ones that can't be replayed, which is also unfortunate because they're the most enjoyable missions of all and you'll rarely get new weapons for your army any other way.

When you're not leading your Patapon army on a mission, there are a number of things to keep you occupied back at the tribe's home base. A handful of rhythm-based minigames that are unlocked during missions can be played here to earn extra resources and, in one case, to prepare attribute-boosting food for your army. There's also a life-giving tree of sorts where you can plant resources, such as meat, rocks, and alloys to birth new warriors for your ranks. The quality and rarity of the materials that you use here will have an impact on the appearance and attributes of the warrior that's created, but you'll also need a lot more ka-ching to make it happen. Regular Patapon units are black and white; to paraphrase an insult from a Zigaton enemy, they look a lot like eyeballs with limbs. When you create stronger, faster, or fire-resistant units (to list a few examples of what's possible), the eyeballs change color to blue, orange, or green and occasionally sport some quite unusual headgear that prevents them from wearing any helmets you pick up from fallen Zigatons.

As is the case in many role-playing games, collecting armor and weapons is one of the more compelling features of Patapon. Your army of eyeballs will look mighty impressive by the time you reach the end of the game. Because the game's loot selection is so large and varied, it's also unlikely it will look the same as anyone else's. Some of the more ornate helmets dropped by mini-bosses are guaranteed to end up in your armory at some point, but there are plenty of swords, spears, shields, axes, maces, bows, and other weapons that you might never see even if you played through the entire game two or three times. Incidentally, it took us a little more than 13 hours to play through Patapon the first time, though we admittedly spent a lot of time experimenting with weather miracles and the like to uncover secrets. We also made a point of beating all of the bosses several times over simply because we enjoyed doing so. You're free to continue playing even after you've beaten the final boss, by the way, which would be great, except that there's very little motivation to do so. Yes, the game is still fun and the bosses continue to get more challenging. But what Patapon really lacks is some way for you to show off your army, its gear, and its achievements to other players on a leaderboard or in a multiplayer mode.

Patapon is a strategy game with some great boss encounters, as well as plenty of different weapons and armor pieces to collect. But first and foremost, it's still a rhythm game. If you can't keep a beat, you'll struggle to string together combos of orders, which will result in your army standing around hopelessly anytime it is unsure about what to do. Fortunately, the game's lighthearted soundtrack (not to mention a pulsating border around the screen) is helpful in this regard, and once you settle into a rhythm, your army will even start to sing along. Patapon's audio design, like that in LocoRoco, is something that you're either going to love or hate, but even those of you in the latter camp are sure to raise a smile at times. For example, there's a baby mountain that lets out a cute chuckle when you play music on its toes in one of the minigames, and in some of the later levels, the music you've come to rely on for rhythm guidance seems purposefully composed to confuse you, which is a neat touch.

There's never been a game quite like Patapon before. Its combination of light real-time strategy and rhythm is as superb as it is surprising. Anyone with access to a PSP would do well to check it out. 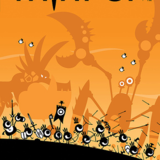