Patapon 2 adds plenty of new ideas to the already unique gameplay, making it a worthy successor to the original.

UK REVIEW--When Patapon came out in early 2008, its deep gameplay, stylish visuals, and unique mix of strategy and rhythm action helped it capture the attention of players across the globe. Now, a little more than a year later, Patapon 2 has arrived with new units, new abilities, a branching leveling system, and a brand-new multiplayer mode. The core mechanics of rhythm action and real-time strategy remain largely the same, but these new additions, as well as a host of unlockables, mean that Patapon 2 is well worth playing both for fans and new players to the series.

As in the first game, you play as a deity to the tiny, one-eyed tribal people called Patapon. The Patapon are sailing toward the end of the world when their ship is destroyed by a huge sea monster, and they call on you to help guide them once again. This primal race is commanded using the Drum of Valour, a tribal instrument that's controlled using the PSP's face buttons. You tap out short rhythms using the PSP's face buttons, with different rhythms for move, attack, defend, and so on. It's fairly simple at first, but the game soon introduces you to new button commands, while the strategy becomes deeper as you progress. The game is beguilingly cute but it's also incredibly deep, and its predecessor excepted, there's nothing out there quite like it.

The major new feature for Patapon 2 is the hero ability, which gives one of your chosen units the power to unleash super moves. The hero attack is activated by tapping out three sets of beats with perfect timing, with the level of accuracy required changing based on your chosen difficulty level. These new attacks are the key to defeating the larger enemies and bosses in the game, and as you find new "memories" on the battlefield, you gain access to more and more different hero abilities. In addition to being powerful, they look really cool in action, and it's definitely worth experimenting with hero abilities to match your style of play.

Patapon 2 also includes some great new unit types. The Toripon is a birdlike creature that specialises in long-range attacks, as long as you avoid the enemy antiair weapons that take them down. The Robopon is a mech-inspired power unit that can charge in and smash enemy fortifications and units, which is great to unleash when you need to turn the course of battle. The Mahopon is a pretty weak unit defensively, but if you can keep it alive, it offers wizardlike powers such as superattacks and healing. Patapon 2 also builds on the first game's selection of minigames, with more-frequent rhythm action-esque interludes in which you can unlock new materials by tapping out rhythms in time to the music.

There's a lot of strategy outside of the battlefield in Patapon 2, and the unit creation and leveling systems are more in-depth than before. You can add new soldiers and level up your existing army by collecting items in each battle, and the new branching evolution system lets you create units that specialise in individual areas, such as speed or strength. This offers you a lot more freedom in terms of customisation, but it also requires you to get much more in-depth. It can become very fiddly to fine-tune lots of individual units once you've accrued a large army, and it can be time-consuming to flick through all of the menu screens. Upgrading units requires resources, some of which can be hard to find, but there's fun to be had revisiting levels in search of these items because levels often play out differently after you've beaten them previously and can even be altered by variable weather conditions.

Patapon 2's squad management is more user-friendly than the evolution process. You can tinker with the weapon, shield, and hero ability of each unit, or you can automatically optimise the loadout with the press of a button. The game offers hints on the areas in which your units should specialise, but it can sometimes be a bit confusing to figure out the best upgrades to make. Experimenting with different formations is one of the most fun aspects of the game, especially because it's just so much fun to see the Patapon dancing to your orders and battling it out onscreen. In addition to your hero, you only get to take three unit types into each battle, and you'll inevitably be forced to leave favorites behind when you find levels that they're not well suited for.

Whereas the first game was single-player only, Patapon 2 introduces multiplayer to the mix. This mode supports up to four players via local wireless, with game sharing for people who don't own the game and AI teammates to fill any gaps. There's only one game type: Each player controls a Patapon hero, and you have to work together to carry a giant egg to the end of the level. It's great fun to play with friends, with two players carrying the egg and the other two fending off enemy attacks, and if you get to the end of the level, all players have to tap out beats for the egg to hatch. This results in items for the host that can be taken into the host's single-player game, so multiplayer is well worth playing--especially if you're the host. The only downside is the lack of long-term appeal; a few more multiplayer game types would have added to the longevity.

Patapon 2 is incredibly charming, and everything from the adorable little warriors to the beautifully coloured backdrops is a delight to look at. Although it appears to be similar to the first game, it's actually a lot prettier, with more-detailed environments, weather effects, and units. The new robot units are a particularly welcome inclusion, contrasting nicely with the standard soldiers in the game. The audio style is tribe-like drums and bells, and though the childish chanting and repetitive beats can become annoying, especially for those not playing, there's no denying the hard work that has gone into the audio production.

Patapon 2 doesn't drastically change the formula, but substantial tweaks have been made across every aspect of the game. The hero abilities add a new layer to the core gameplay, the new units are brilliantly realised, and the multiplayer game mode is a welcome addition to the series. If you've yet to check out Patapon, then there's still nothing else out there quite like it, and players of the previous game should find new things to love in the sequel. 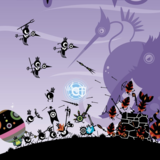 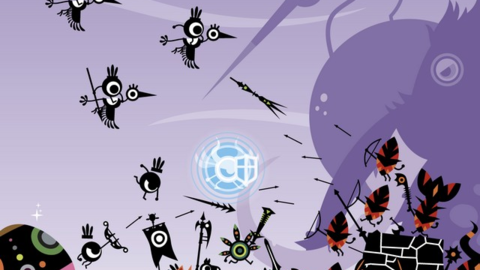