Even dinosaurs, ninjas, and Vikings can't really elevate this real-time strategy game above its generic roots.

If the success of Jurassic Park has taught us anything, it's that everyone loves dinosaurs. We know from experience that people love ninjas too. And it's safe to say that there's a fair amount of love for the Vikings (the historical ones, not the Minnesota kind), which seems to be the premise behind ParaWorld. This real-time strategy game is not set on a planet with a lot of parachuting going on but instead on a parallel world where dinosaurs, Vikings, ninjas, and even desert tribesmen all inexplicably coexist--though not exactly in a peaceful way. ParaWorld throws all of these elements together, but what--on paper--looks like a brilliant idea turns out to be another generic real-time strategy game in a genre that is already stuffed with them.

You can't help but play ParaWorld and be reminded of the Dinotopia children's books, as well as the short-lived television series, which seems appropriate because the game's overarching plot is told with the simplicity (and the voice acting) of a Saturday morning cartoon. Basically, three researchers from Earth discover that there's a parallel planet to our own, travel to it, and now must find a way back. This means not only battling some of the more hostile residents but also the evil bad guys from Earth who are exploiting the parallel planet. The story is told in such broad strokes that you can't tell whether it's trying to be hammy on purpose. But at least it's always easy to tell who's who because the bad guys chew on huge cigars, while the good guys wear strange, bright-colored jumpsuits.

ParaWorld's main problem is that its gameplay mechanics just aren't that fresh or interesting. It's not just the familiar blend of resource gathering, base construction, and unit generating that's the issue here, but rather, all of it just isn't well put together. Resources are very, very finite, which means that you're limited in the strategies you can apply because you can't build much of anything. And if you fail, trying to rebuild your forces is that much tougher. Levels are designed so that they lead you by the nose for the most part, which makes it feel like you're not strategizing but rather jumping through hoops. And it doesn't help that your lumbering dino units take a long time to get from point A to point B. Also, the combat is utterly generic while the dinosaur and martial arts units aren't that tough, powerful, or special--when you expect the complete opposite.

There are some interesting ideas in ParaWorld, even if they can't save the game. The army controller prevents you from simply swamping your opponents with sheer numbers because each unit takes up a slot on the army controller, and you only have so many slots. More significantly, the slots are divided into ranks, so you can only build so many level 1 units, a smaller number of level 2 units, and so on. This also plays a role in promotions because you can use experience points (in this case, skulls) to promote a unit to the next level, which means potentially unlocking new powers or abilities, as well as giving more hit points, increased damage attacks, and so on. Meanwhile, the missions in the game are part real-time strategy and part adventure because there are various quests that you can pursue on the side. These quests aren't essential to the ultimate goal of winning the level, but they can earn skulls that you can use to level up your heroes and units. However, we did encounter some bugs. For example, when we accomplished a quest objective, the quest still remained unsolved.

Skirmish and multiplayer suffer from the same sorts of issues found in the single-player campaign. Multiplayer offers up several modes, including standard deathmatch, a one-against-all defender mode, and a domination mode where you must capture and hold a territory. Because all players rely on the army controller, multiplayer matches are more even affairs. Each person has the same number of points and unit slots to work with, so it all basically evens out.

The visuals in ParaWorld are far stronger than the audio. In fact, we really haven't seen many real-time strategy games as lush as this one. The sun-drenched tropical setting is a nice change of pace from most strategy games, which tend to be set in less warm and friendly climates. Meanwhile, the dinosaurs are nicely detailed and animated when they're on the screen. The good looks are in contrast to the lame dialogue and voice acting, which has characters sounding like one-note caricatures. There's the bombastic guy, the smart guy, the reasonable girl, and so on. The one saving note on audio is the heroic musical score, which borders on being overly heroic, but it's still fun to listen to the music. However, when you get down to it, ParaWorld is essentially the same real-time strategy formula that we've seen in countless other games. If you were hoping for scenes of awesome combat with dinosaurs tearing up the place, you'll have to look elsewhere. 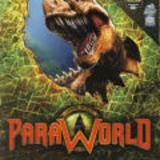 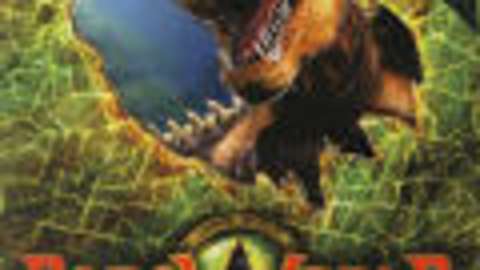 This game is a 3D RTS that combines both modern elements and primeval conditions, such as dinosaur attacks.