If you ever cared about the arcade version of Paperboy, you'll get some nostalgic excitement from this emulation of the original.

Life in the suburban jungle is no joke. Every day may be your last, and the worst part is, you don't know what could happen to you. Are you going to get hit by a car? Run into a shambling bum? Get attacked by an angry cat? Will you inadvertently end up in the middle of a brawl between two thugs? Anything can happen. Back in 1984, Atari Games released a suburban simulator that's never been matched in terms of its gritty realism. The game was called Paperboy, and now there's an emulated version of the arcade classic game available on Xbox Live Arcade.

OK, maybe things aren't as rough on the suburban streets as they seem in Paperboy. You, as the bike-riding paper-delivery technician, need to navigate the rough-and-tumble streets as you attempt to throw newspapers into the mailboxes or onto the porches of your subscribers. Along the way, you'll want to toss newspapers through the windows or at the garbage cans of your nonsubscribers, teaching them a costly lesson in the business of news. The original arcade game was played with a nice handlebar controller that made the game stand out. Here, you're limited to the analog stick and the A button. This control scheme works just fine but loses a little something in the translation.

The only thing you really need to know about Paperboy is that it contains the greatest bassline ever put into a video game. It also makes the best use of a synthesized cowbell ever, video game or otherwise. Seriously, you could probably write a thousand rap songs over some of the funky loops found in Paperboy. The track with those loops is faithfully duplicated here, and it's still great. But it would have been nice to hear the game with some new sound effects and music, which many other Xbox Live Arcade classic releases have received. The game has also aged quite a bit, and much like with the audio, there are no graphical updates. But the game was always pretty lively looking, and the graphics do still have a good amount of personality. The press releases for this game say that it will have "modernized" audio and "new artwork," but that's totally deceptive. It looks and sounds the same.

The additions made to Paperboy on Xbox Live Arcade are the standard leaderboards, achievements, and online support. The achievements are nicely varied and give you a few different things to shoot for when you play. The online support is standard for these sorts of rereleases. You and another player play Paperboy at the same time. You don't even see the other player's screen, just his or her score. When one player loses, the game ends for both players, and scores are compared for versus games or combined for co-op. A co-op mode where one player rides the bike while the other tosses papers might have been a bit more interesting.

Paperboy was an '80s arcade classic, and it's still good for some nostalgic excitement, provided you have fond memories of the original game. If you're too young to remember it, chances are you won't get quite as much out of it, but it's still a fairly entertaining game. And like the other arcade rereleases, it clocks in at 400 points or $5. 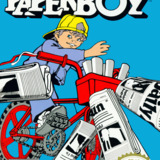 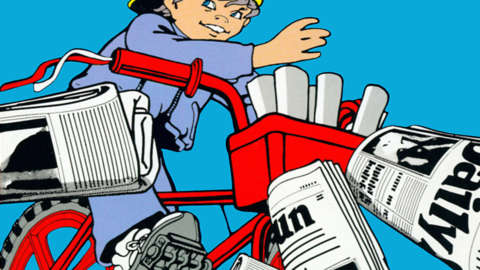 Paperboy makes its way onto the Xbox Live Arcade.