With stunning graphics, excellent sound, and extremely solid gameplay, Paper Mario is a quality game on all fronts.

Paper Mario is the follow-up to Super Mario RPG: The Legend of the Seven Stars for the SNES. Existing in a world composed of paper cutouts, Paper Mario combines the simplified RPG system that made Super Mario RPG such an innovative and fun game with the side-scrolling action that made the 2D Mario games so popular. Not only is Paper Mario a tender bit of nostalgia to anyone who misses the good old days, but it is also a shining example of what Nintendo does best.

Paper Mario has a plot that should be familiar to any Mario fan. Bowser has once again invaded the land of the stars and has stolen the magical Star Rod--a scepter that has the power to grant the wishes of whoever holds it. Bowser used the Star Rod to imprison the seven star spirits, who used their power to watch over the land. Armed with the power to make his slightest wish a reality, Bowser quickly kidnapped Princess Peach, made himself invincible, and scattered the imprisoned star spirits to the ends of the Mushroom Kingdom. It's up to Mario to find the seven star spirits, rescue them from Bowser's evil minions, and eventually use their power to defeat Bowser himself.

The game plays similarly to Super Mario RPG. The game is broken up into the field screen and the battle screen. Mario and his party move around on the field screen--an adventure-based 3D plane where you interact with items, enemies, and people in real time. Once an enemy spots Mario, it will charge him. If you touch the enemy, you'll enter the battle screen--a turn-based, menu-driven combat system. How you touch an enemy has a dramatic effect on the start of the combat round: If Mario strikes the enemy in the field screen, he'll strike once before combat actually begins in the battle-screen system. If the enemy charges Mario, the enemy will strike first. This system rewards you for quick reflexes and mixes in a taste of the now extinct side-scrolling action that made the Super Mario series so popular. In combat, Mario has two basic attacks--jumping on enemies and hammering enemies. Mario will eventually gain several special attacks, but with the exception of the powers endowed to him by rescued star spirits, the attacks will always be a modification of his jump or hammer attack. Additionally, Mario can use items to aid him. The game has several items, both for offensive and defensive purposes. Mario also has friends who can help him. As in any RPG, Mario will eventually stumble across other characters that share his goal, and they will join Mario in his quest. Mario can have any one of his sidekicks in battle with him at a time and can use that character's power to defeat enemies. The characters also have special abilities that are used on the field screen. Characters will carry Mario across chasms, let Mario travel over the water, fetch items that are just out of reach, make Mario invisible, and more. Progressing through the game's levels is an excellent combination of turn-based combat and classic side-scrolling Mario action.

Paper Mario is an extremely simplified RPG. Mario has only six essential stats. Mario's heart points represent his health--when it reaches zero he dies. Mario's flower points let him and his sidekick execute special attacks. Badge points allow Mario to wear badges--special items in the game, which endow Mario with new abilities and attacks. Badges can be found, bought, and given to you throughout the course of the game, and they are vital to Mario's development. Each badge has a rating--depending on how powerful the badge is--that requires badge points to equip. The more badge points Mario has, the more badges he can wield. Additionally, Mario's jump and hammer attacks are represented by what particular hammer and pair of boots he has. Mario starts the game with the basic pair of boots and no hammer and eventually finds a powerful hammer and a more powerful pair of boots. These new boots not only boost your attack power, but they also let you stomp through special areas in the field screens. Additionally, the hammer will raise your attack power, and it can also be used to smash through huge blocks that will impede Mario's progress through the game. Once Mario rescues the first star spirit he'll gain star power--a category of special attacks comparable to magic in other RPGs. Mario has a star spirit gauge that will gradually fill during combat. Each star you rescue will not only increase the size of your star spirit gauge but will also endow Mario with a new star spirit technique. Once Mario rescues all of the star spirits, they'll combine to give Mario the star beam technique--the only attack powerful enough to stand a chance against Bowser and the Star Rod. Mario gains star points by defeating enemies in the battle screen. Once Mario collects 100 star points he levels up. Leveling up replenishes any spent heart points, flower points, and star power, and lets you choose to upgrade one of three stats--your heart points, badge points, or flower points. Unfortunately, leveling up only upgrades that one stat, so you'll have to choose carefully. Also, once you beat the boss of any one area, the enemies in that area will no longer give you star points when you defeat them. This, combined with the slow process of upgrading all your stats, keeps the leveling up in Paper Mario a fairly controlled process, as you cannot become more powerful than you're supposed to be. As such, the game is always challenging--Mario will never beat a boss character without breaking a sweat.

Actually participating in combat is also extremely simple. Mario and his companion stay on the left side of the screen, and enemies line up to on the right side of the screen. Enemies are either on the ground, in the air, or on the ceiling of indoor areas. Mario can hammer the first enemy in line on the ground, or he can jump on any enemy on the ground or in the air. Mario's sidekick has a basic attack that usually specializes in air enemies or ground enemies and an additional special attack. Mario can find special blocks that let him upgrade his sidekicks, which will not only boost that sidekick's attack power but will allow that sidekick to learn brand-new special attacks. Landing attacks has an appropriate effect on enemies. Jumping on flying goombas will remove their wings and make them ground-based, and jumping on koopas will flip them. Mario will take damage if he jumps on spiked or fire-based enemies. Using the right attack on the right enemy is more important than the raw strength of your attacks, and many boss characters will require you to figure out their weak point and exploit it. This makes the combat in Paper Mario an exciting and somewhat strategic element, as you're never simply using your best attack to kill whatever you come across.

Rescuing the seven imprisoned star spirits will take Mario to all the realms of the Mushroom Kingdom. Mario will travel through just about every area seen in previous Mario games and will encounter all of the friends and enemies associated with the series. Koopas, goombas, shy guys, yoshis, bombs, toads, and just about every other species from the other Mario games can be found in Paper Mario. Additionally, the levels and backgrounds of the field screens are extremely true to the series. Brick blocks, question-mark boxes, special keys, and switches all keep the action in the field screens familiar. And locations like lava-filled caverns and haunted houses make the backgrounds extremely nostalgic to any Mario fan. Characters returning from previous games behave exactly like you would expect them to. Bowser is as dense and as driven as ever; Mario is heroic; Luigi doesn't do much of anything; and Bowser's minions are as wacky as they come. Additionally, the game features some of the best dialogue written for a Mario game. Characters are witty, and plenty of inside jokes and tongue-in-cheek humor provide lots of genuinely funny moments in Paper Mario. Also, the game strays from typical RPG fashion with lots of side games and odd bits. In one, you play as Princess Peach, who uses a secret passage in the castle to escape from Bowser's guards and makes her way to a kitchen. There you have to play a small minigame in which you bake a cake tasty enough to bribe an overweight shy guy who knows the location of the next hidden star spirit. It's this faith to the feel of the series combined with the odd deviations from the norm that make Paper Mario such an appealing game.

The events of Paper Mario are a story that is supposed to be told through a storybook. As such, everything in Paper Mario is designed to look like it has been cut out of paper. All of the graphics are hand-drawn sprites and are colored to look like a painting. Though the basics of the world are 3D polygons, all the details are flat sprites. The characters in the game look like paper dolls and even flip over when they change direction. This effect is extremely well done, and it gives Paper Mario an extremely nostalgic feel. Additionally, a huge amount of detail was given to the graphics. Each of the areas in Paper Mario has plenty of graphical charm, and every part of the game looks like it belongs. Paper Mario brings back the layered levels look of Super Mario World, with trees and other objects actually existing in front of the path. Another huge part of the graphics are the battle screens. The backgrounds to the battles actually look like the stage of a play. Trees and clouds will hang from ropes, and the stage itself looks like it was decorated with low-production props. The backgrounds in the battle screen are exactly like the field screen where you entered the battle--if you're standing in front of a specific object, you'll see it in the battle screen. This attention to detail really makes the graphics stand out. The game also boasts some of the best sound found on the N64. Paper Mario has new remixed versions of plenty of classic theme sounds found in other Mario games, including the original Super Mario Bros theme and the foreboding haunted house music found in Super Mario World. The music runs through every part of the game and really adds to the overall quality of the title. Additionally, plenty of classic sound effects keep the audio familiar to Mario fans. The only thing missing from the audio is voice work, which would have made the game a bit more interesting.

With stunning graphics, excellent sound, and extremely solid gameplay, Paper Mario is a quality game on all fronts. The sprite-based graphics combined with classic Mario gameplay make this a must-own for any Mario lover, and the simplified RPG system makes this a compelling game for both RPG fans and non-fans alike. Games of this caliber are few and far between, and it's too bad that Paper Mario might be the last great 2D Mario game. 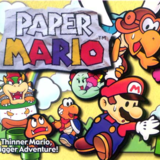