Panzer Paladin's heavily old-school-flavored action is a blast from the past from beginning to end.

Retro throwbacks that take inspiration from classics of a bygone gaming era can be found all over the various download storefronts that exist in today's console landscape. Taking inspiration from past masterpieces is one thing, but doing it well--and making a game that feels fresh and fun in the process--is another. Panzer Paladin borrows ideas and aesthetics from a variety of NES classics ranging from Blaster Master to Zelda II, but it mixes them all (with a dash of mech anime styling for flavor) into a curious new concoction. The result is a fun and engaging adventure that 2D action fans old and new would do well to check out.

Panzer Paladin's premise and visual style feel lifted straight out of a cult-classic retro game from the early '90s. As spunky, jump-suited android lady Flame, you are tasked with piloting your giant sentient mech exosuit buddy Grit in an effort to fight off a massive race of bloodthirsty, war-hungry interstellar monstrosities called the Ravenous. You trek through seventeen stages, some on Earth and some in the Ravenous's stronghold, filled to bursting with enemies, hazards, hidden treasures, and lots of weapons from the aliens' corrupted forge.

And by lots of weapons, I really do mean lots of weapons. Hammers, knives, lances, daggers, swords, staves, hockey sticks, giant bones, ultra-hard frozen ice pops--every level in Panzer Paladin is rich with a variety of implements to cut, poke, and smash with. While Grit's fists pack a mighty punch, weapons are the way to go for any serious combat, adding range and power to the mech's strikes. However, the intensity of battle wears weapons down, and all of them will eventually break--but that's okay, because there are always plenty of new and unique armaments to be found from defeated enemies and hidden away in walls and crevices that you can stockpile.

Grit is an expert at wielding all of these armaments of destruction. He can swing high and low, use a jumping upward stab for an aerial boost, throw a weapon at a foe for additional damage (thus losing the weapon), and even perform a jumping downstab to damage and bounce off multiple foes below him. But the Ravenous are a warrior race, and many of them brandish their own arms--thankfully, Grit's shield can absorb many strikes and projectiles, provided you're quick with blocking and dodging.

By far the coolest element of weapon collecting and usage, however, is the ability to break a weapon in order to use its latent power. Every weapon has a "spell" ability that you can utilize by holding down certain buttons until the weapon is destroyed, granting a beneficial effect. These range from simple healing and buff spells that increase attack and defense to screen-clearing lightning strikes, temporary projectile beam attacks, or even a fleeting pair of wings to help Grit cruise more safely over precarious platforming. You can choose to sacrifice any weapon at any time to get its benefit, adding a fun layer of strategy to the platforming action--do you want to destroy this really cool weapon now for a temporary boost, or try to hold onto it for later? While there's no shortage of weapon pickups, some weapons and spell effects are rarer than others, making the decision to destroy your own gear a tough one in certain situations.

Grit isn't invincible, however, and if he takes one too many blows, he'll be out of commission--in which case, Flame will need to take matters into her own hands. Flame is much smaller and more agile than Grit, allowing her to get into small passageways and fling herself across large pits, and she has her own energy whip with which to wreck enemies. However, Flame can't use Ravenous weaponry, does much less damage, and has significantly lower defense and health, making the levels a much bigger threat. You can manually separate Flame and Grit if you want to use Flame to explore--or as a challenge--and sometimes Panzer Paladin will force you to use Flame by herself in certain areas. These portions don't feel as well-made as the rest of the game, often repeating similar, dull whip-swinging and block-smashing puzzle challenges. Being forced to use Flame with Grit out of commission in the regular parts of stages, though, is a whole different ballgame--it challenges you to survive long enough to find a power recovery unit and summon Grit back to your side, which is certainly not easy.

After you clear Panzer Paladin's introductory level, you can visit the next 10 levels in any order--and revisit old stomping grounds if you want to stockpile an arms stash. (You can also choose to sacrifice weapons in your inventory to get a permanent HP boost for Grit.) Being able to play and revisit stages of your choosing is nice, though some stages are significantly more challenging than others, which can lead to a feeling of whiplash from one stage to the next. Also, each fairly lengthy stage only has two checkpoints--one in the middle and one before the stage-end boss--which is particularly aggravating if you lose a life after a slow-paced auto-scrolling climb or nasty platforming segment.

But what annoyances are found in Panzer Paladin are easy to overlook. The smooth controls of both Grit and Flame make moving and fighting a consistent delight, even in those aforementioned platforming challenges. Every level in the game has a distinct look and theme (Egyptian pyramids, Scottish castles, American city subways) to it, giving the game's world a vibrant, varied feel even with the purposefully limited NES-style color palette. Boss fights are particularly memorable, with every stage-end encounter presenting a varied challenge full of detailed animations and crazy attack patterns--some of which fill up the screen with so much destruction that you'll want to switch to controlling Flame to better dodge them. Even once you've finished the game, there's a good deal more to explore: a Remix mode which changes up familiar stages with new hazards and more resilient enemies, an online competition boss-rush Tournament mode, and even a weapon editor where you can make and upload your own pixel armaments that other players can pick up from the mid-boss Horseman enemy.

Making a good retro-style game is hard--balancing old-fashioned play mechanics with newer advancements in game design is a tough tightrope to walk. But Panzer Paladin manages that balancing act with few slip-ups, delivering solid platforming action, fierce weapon duels, epic boss fights, and a cool weapon-sacrifice mechanic, all dressed up in an immensely charming classic-robot-anime wrapping. While it might have its brief moments of annoyance, the amazing globe-trotting, alien-smashing adventure of Flame and Grit proves to be a delight from beginning to end. 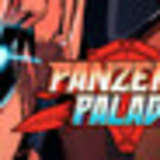 Heidi grew up on NES and MegaDrive platformers and '80s anime. Panzer Paladin might as well have had her name written all over it. She played the game for 14 hours, finishing regular story mode and playing a ways into remix mode on standard difficulty.