Panzer General III: Scorched Earth takes its predecessor's engine and simply shifts the setting of the game to the Eastern Front.

SSI's Panzer General series has consistently provided no-nonsense World War II-themed fun for those who prefer simpler gameplay over meticulous attention to realism. Panzer General II was the first in the series to use 3D units, but those were pre-rendered. Last year's Panzer General 3D Assault used fully 3D vehicle models while preserving the gameplay of the first two games. Panzer General III: Scorched Earth takes its predecessor's engine and simply shifts the setting of the game to the Eastern Front. Instead of the Americans, British, French, and Germans, it's the USSR against Nazi Germany in the biggest land war in history. The campaigns - two each for the Soviet and German sides - are sufficiently long and expansive to capture the feeling of that titanic conflict.

Panzer General III: Scorched Earth is a complete game in itself. However, the basic game engine is identical to the one used in last year's Panzer General 3D Assault, and those who are familiar with that game will find Scorched Earth to be little more than a set of new units, scenarios, and campaigns for what is essentially the same game. The biggest addition since 3D Assault is the inclusion of a battle generator for random engagements.

The Panzer General series is simple at its core, but involves a surprising amount of strategy and planning. Movement and combat is turn-based, and units include tanks, infantry, aircraft, anti-tank guns, and artillery, each with specific strengths and weaknesses against the others. Infantry holed up in a city is very powerful against tanks, but is vulnerable to artillery bombardment. In the open, that same infantry can be easily overrun by armor. Using combined arms to defeat the enemy is a basic theme in all the Panzer General games, and is no less prominent in Scorched Earth. Because the Soviets did not appear in Panzer General 3D Assault, Scorched Earth presents units like the T-34 and KV-I tanks, MiG fighters, and Soviet infantry for the first time.

One major design change from Panzer General II to Panzer General 3D was the shift in focus from unit experience to a system of leaders. In the first two Panzer General games, units gained experience as they survived from battle to battle, and became more powerful as a result. In Assault and Scorched Earth, units have leaders assigned to them, and it's these leaders who gradually get more powerful through promotions earned for completing scenario objectives. Thus, a leader can be assigned to different units in different scenarios. This robs the 3D Panzer General games of some of the charm of the earlier ones, where relatively weak units like a Panzer II tank could survive into the latter stages of a campaign and become quite powerful. In the 3D games, high-ranking leaders will invariably get shifted to the stronger units, like Tigers and Panthers.

The campaigns in Scorched Earth are quite challenging, not because of a particularly strong computer opponent, but because the scenarios themselves are set up to be difficult to win. This will certainly frustrate novice players who will end up replaying scenarios over and over, since you can't progress in a campaign until you've successfully completed the scenario at hand. For this reason, the difficulty can be adjusted by giving yourself more units, better leaders, unlimited ammo, and the like.

The real problem with Scorched Earth is that it doesn't fix any of the problems introduced by the shift to 3D: namely, the confusing perspective that can make judging unit positions difficult, and the unfortunate shift away from the unit experience system. Scorched Earth is nothing more than Panzer General 3D Assault in Russia, and the price seems a bit high for a simple extension of a year-old game that itself hadn't improved much on its predecessors.

Panzer General III: Scorched Earth will offer absolutely no surprises to those who have played previous games in the series. While the basic system still offers a simple and addicting game experience, it hasn't really changed in five years. Then again, Panzer General addicts who've been waiting for the 3D system to be applied to the Eastern Front will get their wish with Scorched Earth. While it would have been nice to see SSI extend and improve the gameplay significantly in this latest game in the series, to mess with the proven formula was apparently beyond the scope of Panzer General III. 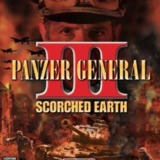