Pandora's Tower is an exciting, chain-swinging race against time to save your beloved from a beastly fate.

UK REVIEW--Love endures all things. Heartache. War. Watching your soul mate devour the pulsating flesh of hideous beasts. Pandora's Tower is an action role-playing game crafted around this somewhat unusual premise. It's equal parts fairy tale and wince-worthy body horror. An original approach to combat and a clever time-management mechanic set the game apart from the usual hack-and-slash affair. Throw in some intelligent dungeon crawling, and this bloodthirsty love story makes for a refreshing change of pace.

Singer Elena is turning into a beast. The telltale signs are all there: the sense of foreboding, the cursed mark on her back, and the fact that occasionally she sprouts tentacles and excretes purple slime. Thankfully she's not alone. Protagonist Aeron is on hand to provide her with love, support, and beast flesh. The pair are guided to the Observatory, overlooking The Scar, a great rift in the earth held together by 12 chains, at the ends of which sit 12 towers. Within these towers, our hero is told, are monstrous masters who must be slain and whose flesh must be consumed by Elena so the curse may be lifted.

It's an unusual premise, albeit one reminiscent of Shadow of the Colossus with added devouring. Each of the masters resides in a tower, a self-contained dungeon that you must traverse to reach your prey. These dungeons are filled with typical puzzles, traps, and beasties, all determined to get in your way. It's not just a simple case of exploring, though. Elena's curse gradually worsens, and the only way to prevent her from beasting out is to feed her flesh. As you trek through each tower, a gauge in the bottom corner shows the progression of the curse. Should you fail to reach the tower's master in time, you need to head back to the Observatory and give Elena a gruesome, fleshy top-up.

In the wrong hands, this time-management mechanic could have been a chore, an artificial lengthening of the game via backtracking and time limits. Here, though, developer Ganbarion has riffed on the time-limit mechanic masterfully. It's as much about area management as it is about time. Each tower has a bunch of shortcuts to activate, and pushing forward can often be a surefire way to find an easy way back. As you progress through the towers, looking for the chain fastenings which you're required to break to access the boss door, you're not only plotting your route forward, but memorizing your route back, pushing against the time limit until you can find a precious ladder to drop or door to unlock which provides easy passage back to Elena.

Areas are never sprawling or complex enough to cause you to get truly stuck, but they require enough pauses for thought that the time limit still feels like a constant menace. Returning to the Observatory doesn't reset the dungeon's puzzles, and the game never punishes you for returning to Elena. If the time-management mechanic had led to extensive backtracking and wasted progress, it could have been Pandora's Tower's undoing. Instead, it ends up being one of its greatest strengths.

Dungeon puzzle design may seem cursory at first; switches, levers, and locked doors must be manipulated to access further parts of the tower. However, later in the game the puzzle design really shines; you find yourself hunting sentient, color-coded roses to eradicate thorns, or tying pistons in place to act as platforms. The final two towers provide the game's most rewarding puzzles, playing around with the established structure in ways that are best discovered for yourself. Much of the puzzle solving revolves around another of the game's most interesting conceits, the Oraclos Chain.

The chain was granted to Aeron by the froglike Mavda, a member of the nomadic Vestra tribe who carries a skeletal old man on her back. It is a mystical artifact that has lost much of its power, and functions as a means of solving puzzles and as a lethal weapon. It works as a grapple--a little like a lengthy version of Link's hookshot--and is used to retrieve distant items, reach grappling points, or swing from poles. An onscreen pointer lets you direct the chain, and a quick tap of the B button fires it off. It also allows you to zoom in for precision shots, slowing down time as you aim.

It's pretty handy against monsters as well. Using the chain, you can rip weapons and armor from enemies, pick up an enemy and slam it, or even spin an enemy around to send it flying. It can be used to restrict an enemy's arms, to pull it off its feet, or to restrain it and drag it around. All the while, you can charge the chain up and then yank it free with a flick of the remote, dealing massive damage to a foe. Then, after felling a monster, the barbed end can be used to tear free some precious flesh. Once you get to grips with the chain, it's immensely satisfying. Nothing beats slamming a giant hornet into an ogre-type beast and dragging the ogre off its feet, or simply using the precision aim to fire off a volley of damaging shots.

Aeron is also equipped with a sword, although a couple of other weapons can be found during the course of your adventure. Initially, the melee combat seems simple, with a single attack button that can be held and tapped to set off combos, and a basic block/dodge button. Your sword is always there as a backup to deal that bit of extra damage or take out weaker foes. However, the chain grants depth to the combat that makes Pandora's Tower more than just the simple hack-and-slash it might initially appear to be. The game also offers Classic Controller support, although the Remote and Nunchuk combo is the superior control scheme here.

Fighting the masters is a different story. These large boss monsters have glowing weak spots in the form of master flesh, and their health bars can't be depleted outside of hooking into this flesh and pulling at it. All the bosses share this structure, but they don't feel repetitive because of their varied design. It's not simply a case of hacking at the weak spot with the chain; each boss requires a different technique. One boss's legs must be disabled and his back mounted to reach the point on his head, for example. A plant-based creature retreats to a beam of light to recover health, and you have to drag him back into the shadows with the chain. A couple of the bosses are fiddly due to the speed in which you're required to aim at the weak spots while dodging their attacks. For the most part though, these fights are excellent, demanding both combat prowess and puzzle-solving ability from the player.

The combat isn't without the occasional problem. Stubborn camera angles can sometimes cause you to be attacked by an offscreen enemy, although your view is never difficult to adjust (and being able to drag enemies into view with the chain helps immensely). The pointer controls take some getting used to, because you're required to aim on the spur of the moment. Thankfully they're precise and responsive, and the game eases you in with a forgiving difficulty curve. There's a lack of variety in enemy design, and extra instances of the more creative enemy types would have been welcome, but it's never enough to lead to fatigue.

Outside of the towers, the Observatory provides a hub for respite, crafting, and building a relationship with Elena. The dynamic between Elena and Aeron is a touching one, with their bond illustrated by a glowing bar on the left-hand side of the screen. This can be increased by feeding Elena flesh, as well as by giving her gifts and simply chatting to her. When you talk with Elena and Mavda, snippets of plot are revealed, and major developments come by way of visions Elena receives after eating. The story of Aeron and Elena is a grounded, human one in a world of monsters.

Elsewhere in the Observatory, Mavda and her skeletal companion are on hand to sell you items and craft things with the loot you find in dungeons. Armor, medicine, and new items can be created, and weapons can be improved. It's possible to spend hours simply collecting things from towers to upgrade to the best equipment, although the game never forces this on you. Instead, it works on the principle of the more you put in, the more you get out of it, something that comes into play upon completion, when a New Game Plus option opens up new areas and items to strengthen your bond with Elena. With five endings and plenty of postgame content, there's a lot to do beyond the initial 15- to 20-hour completion time.

Character designs are excellent; Mavda is a pallid, amphibious old hag while Elena possesses simplistic beauty--at least until she starts to sprout probosces. Aeron's the most traditional, a striking knight in white and gold, and the only fully human character in this frightening realm. The beast transformations are also suitably stomach churning, and the scenes in which Elena eats flesh are disturbing, managing to be creepy and sad at the same time. The soundtrack, too, is excellent, featuring various reimaginings of classical pieces. The highlight is the main theme, which is a wonderful rearrangement of Verdi's Dies Irae.

Pandora's Tower melds together some interesting mechanics into a brilliant whole. When put together, the different aspects create an excellent, melancholy adventure that combines the joy of exploration and discovery with an unusual combat system and a wonderful central love story. It's a great journey even on the surface level, and the more you put into it, the more it rewards you. 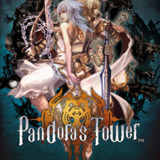