It’s always a risky proposition to take a beloved classic franchise and move it forward with added twists. Change too much, and a reimagined retro game can lose its nostalgic charm. Don’t change enough, and players might not see the point at all. Bandai Namco has been toeing this razor-thin line with Pac-Man for quite a few years, but with good results. In 2007, Pac-Man: Championship Edition bolstered the series' simple maze template with different modes, challenges, map configurations, and eye-catching effects--and the result was one of the best arcade revamps ever made.

Fast-forward nine years, and Bandai Namco has successfully rejuvenated Pac-Man once again in Pac-Man: Championship Edition 2. It’s so overhauled, in fact, that it uses a progression meter to unlock new modes--starting with a tutorial. Who’d have thought that a Pac-Man game would need instructions? Yet Championship Edition 2 definitely does. Rather than merely teach you how to play, it also serves as a quick trip down the road of game design to see how developers can successfully evolve a game from 1980.

The first major enhancement comes courtesy of Pac-Man’s relationship with the ghosts, Blinky, Pinky, Inky, and Clyde. Pac-Man can touch them now, after decades of doing his best to avoid making contact. Even though you won't outright die if you bump into a ghost, it can still have dangerous side effects--and after the third bump, the ghosts will doggedly chase down Pac-Man and kill him on contact.

The game includes sleeping ghosts as well, who wake up when Pac-Man gets near and immediately rush to join their leader. The veritable trains that form after waking up multiple ghosts are vital for achieving high scores, because when Pac-Man eats the power pill that allows him to devour weakened spirits, he can gobble up multiple ghosts in quick succession. When it's time to feast on the dead, the game switches to a cinematic 3D view, allowing you revel in your success in style.

Boss battles are also included now--but done in proper Pac-Man style. You don’t attack a boss directly, since they float above and below the board (they’re usually massive ghosts made up of hundreds of blocks). Instead, you fight through a series of maps by collecting every last piece of fruit. On the final stage, Pac-Man must eat enough dots to make a power pill appear. The resulting mayhem isn’t quite as interactive as it could be--the power pill merely kicks off a cutscene where Pac-Man devours the boss on his own.

The final twists are bombs and bomb jumps. Essentially, if Pac-Man gets himself into a tight spot, a quick button press will send him back to his starting point. This is important, because Pac must tactically change course sometimes in order to evade ghosts or catch floating fruit that runs away from him.

The first Championship Edition was a triumph of style, and the same can be said here. The classic Pac-Man theme is present and accounted for--remixed and enhanced like everything else--and the overall presentation is terrific. All these elements come together across the game's many levels to create an experience that’s still absolutely Pac-Man but advanced in ways that make it far more interesting and strategic.

Pac-Man: Championship Edition 2 creates an exciting dynamic where ghosts are still dangerous, but the overall game is more forgiving than the original--and it’s more entertaining as a result. Arcade ports tend to be games we play in short bursts--mostly for the nostalgia factor. Pac-Man: Championship Edition 2 certainly relies on that nostalgia to a point, but it handles the classic game in a way that plays with expectations to surprise you. It’s the same game enhanced in the right directions to be make an old concept fun, innovative, and challenging all over again.

Editor's note: Just released on Switch in a slightly enhanced “Plus” version, Pac-Man Championship Edition 2 feels perfectly at home on the portable system. It retains all the same game modes, features, and good looks of the previous console versions, but smartly adds a two-player mode, where the sense of teamwork is more palpable and there’s a distinct sense of accomplishment when two players work together to trap a whole string of delicious frightened ghosts for big points.

You can also opt to play with a second CPU-controlled Pac-Man, instead of a second player, which changes the dynamics a bit. You’ll merge with the AI-driven Pac at times and then send it off to chase after blue ghosts. But to eat them, you have to trap the ghosts from the other side. In boss rounds, the CPU can automatically go after pellets, then connect with your Pac-Man to attack the boss.

Beyond that, this is the same great game it was on the other consoles with the same great visuals and gameplay. - Jason D'Aprile, Feb. 24, 11:00 AM PT 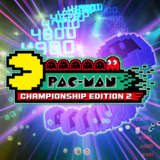 Jason D’Aprile has been gobbling dots with Pac-Man since the beginning, and after around 6 hours with this new Pac, he expects to continue doing so until well into the future. GameSpot was provided with complimentary download codes for the purpose of this review.