You've got to hand it to jugglers: they really know how to up the stakes. Need more tension? Add more objects! Still not enough? Light those objects on fire! And for the grand finale? Recruit a second juggler and start tossing flaming batons back and forth. Cooperative party game Overcooked cleverly borrows this template and applies it to a restaurant setting. Across an ever-changing series of kitchens, up to four chefs must prepare meals by performing simple tasks--chopping vegetables, cooking meat, washing dishes--in an effort to prepare and serve as many complete dishes as possible within a strict time limit.

Each task is, in isolation, dead simple--actions rarely require more than a single button press and objectives are plainly displayed on screen at all times. But as part of a larger coordinated effort, each step potentially becomes that one load-bearing Jenga block that sends the entire tower tumbling when removed. If, for example, your onion soup is ready to serve but you don't have any clean bowls, the soup starts to burn, not only ruining the dish but eventually lighting the kitchen itself on fire as well (don't worry, there's always a fire extinguisher handy). The tiny red warning signal that flashes and the accelerating beep that accompanies it quickly become sources of immense panic.

If this all sounds stressful, you're right, it is. Extremely stressful. And that's exactly why Overcooked is one of the most exhilarating couch co-op games of the year. All the stress and tension that mounts as the timer ticks away result in a massive wave of relief and triumph upon successfully finishing a level at the highest rating. It also sucks you into the experience better than any game in recent memory. The same way a truly great song turns even the most reluctant wallflower into a dancing machine, Overcooked's potent recipe for escalating chaos will have you and your friends screaming instructions to one another without a hint of self-consciousness. More than once, I noticed a teammate standing on the opposite side of a counter directly in front of the bin of food items and found myself breathlessly demanding a tomato. To illicit that kind of reckless abandon is a rare and laudable feat.

And not only does the basic gameplay formula work wonderfully, the experience provides a huge variety of unexpected wrinkles across its reasonably meaty campaign. At the beginning, dishes involve only a single ingredient, but you'll quickly graduate from soups to salads, then to burgers, burritos, fried foods, and so on, each meal more complex than the last. Dishes aren't the only source of challenge and variety, though. Every mission occurs in a different kitchen, and every kitchen introduces its own unique twist.

In addition to coping with layout changes, you might also have to hop between trucks while grilling your way down a highway or dart across icebergs that intermittently connect the two halves of an icy kitchen. If you make it all the way to The Lost Morsel DLC, you'll even have to smack buttons to raise and lower barriers while dodging fireballs. Even smaller challenges--like limited flatware or adorable mice that steal your food--can derail your efforts. The roster of potential variables is both extensive and wildly inventive. This not only keeps the experience feeling fresh, it also results in a renewed sense of accomplishment with each rating star earned.

Without that tension, however, Overcooked's formula starts to fall apart, which is why the game really doesn't work as a solo experience. If you play solo, you control two characters, swapping between them on the fly as they complete automated tasks you've set for them. The gameplay becomes a different sort of balancing act, but too much is lost in the process. The hilarity and infectious enthusiasm of playing with friends is replaced by tedious task management, so the energy fizzles. Plus, score requirements are set much lower, so you can totally bungle a few orders and still somehow achieve a perfect rating.

Without question, Overcooked works best when played with friends, which makes the fact that you cannot play online an unforgivable oversight. There is, at least, a local competitive mode to compliment the cooperative campaign. Two teams of two cook across a series of symmetrical kitchens to see which pair can churn out the most dishes. It's a simple addition that makes no meaningful changes to the core gameplay but provides a welcome diversion from the campaign nonetheless. And recruiting people to play either mode should be relatively easy. Overcooked is not only extremely accessible--with intuitive, pick-up-and-play controls--it's also adorable. Who wouldn't want to chop onions as a racoon in a wheelchair?

Overcooked contains all the necessary ingredients for a truly excellent co-op game. Stress is always balanced out by feelings of accomplishment and progression, and its gameplay requires a mix of smart planning, consistent communication, and some level of dexterity to execute plans effectively. And of course, the cuteness keeps it feeling light and fun, which helps you not hate your friends when they fail to take a pan off the burner in time. It's a shame there's no online option since most of the game's magic evaporates without other players to help you along. If you have folks to play with, however, Overcooked turns juggling simple tasks into a hilarious and occasionally catastrophic exercise in precise communication.

Overcooked is featured on our list of the best Xbox co-op games and best PS4 multiplayer games list. 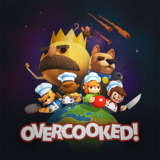 Scott recruited various members of the GameSpot staff to help him test Overcooked. There was yelling. Lots of yelling. GameSpot purchased a copy of the game for this review.