If you were a fan of the original, leave it at that.

December 2115. East Edge, center of the world. Christmas is just around the corner. The world is a boiling inferno that would be uninhabitable if it were not for the atmosphere-cooling device that maintains the temperature. That night, our hero Acarno arrived at the East Edge airport by shuttle to participate in the "Junk Blade" race. On the same shuttle was a Velter Curtis, a mysterious old man, and Chris Rernbecker, a female international police officer. All three were in close proximity to each other when Acarno sensed that Velter's life was in danger. When he tried to save the old man, Velter handed him a capsule. It happened just like that, and this is how it all started... in Overblood 2, the sequel to the original Overblood - two games with virtually nothing in common.

Unlike the original, Overblood 2 has a revamped control scheme, as well as a totally new look. In the beginning of the game you endure a particularly lengthy sequence that sets the stage for the story. Yes, that's right: endure. As with many of the segues in the game, they are rendered using the game's graphics engine, although there is plenty of CG footage to be found as well. The problem is that they drag on forever. Sure, it's all in Japanese, but even so, they ramble on for five to ten minutes at a time. Hey, we're here to play a game! Once actual gameplay begins it comes off like a cross between the original Overblood and Final Fantasy VII. Now before you all start getting excited, this is more aesthetic than it is related to gameplay. Like the first Overblood, much of the game is completely rendered in polygons. The rooms can be viewed from virtually any angle and so on. In other parts of the game, Overblood looks like FFVII, or even Parasite Eve, in that the backgrounds are pre-rendered, and your polygon guy runs around this substantially more detailed environment. During the entire game, Acarno must search practically every nook and cranny leaving no stone unturned, as numerous secrets and hidden places await in practically every screen. Occasionally he'll get into an altercation where he'll have to trade gunfire with the criminal element, but the game is not so combat based as it is objective based. You must find objects, items, keys, voice recorders, guns, security cards, and more, all for the sake of progressing in the game.

Aiding you in your efforts is the ability to use a hook shot. This is essentially a grappling hook that can be used to reach high places. You can also use bombs (in combination with shields and gravity controllers) to jump to places previously inaccessible. Once you progress past the first chapter (there are two discs, each one being a chapter), you can use additional characters rather than only Acarno. Using your walkie-talkie you can switch at any time.

Now, all of this sounds really swell, and basically it is. The problem with the game, and it's a big problem, is that the game is slow. Really, really slow. When you first begin playing the game you feel like you're traveling underwater, it's that slow. Even after you get used to it, you still find yourself pining for the comparatively fast gameplay of games like Resident Evil 2. This, in many people's eyes, constitutes a problem, and nothing ever resolves it. Overblood 2 simply has a slow game engine. Another thing that is particularly hard on the eyes is the extremely low polygon count of the characters. Even the main characters don't look any better than the rest of the teeming masses. Each character looks like it was modeled with 25 polygons. They're faceless, low-detailed, Gouraud-shaded blobs. Acarno's animations aren't very good either. Whenever he jumps, it looks like he's launching into some sort of ballet. Strange. It seems as if almost no effort was made to animate these characters realistically.

So, if you were a fan of the original, leave it at that. Do yourself a favor and avoid Overblood 2. While there's a lengthy quest involved and plenty of things to do, it's highly boring and extremely slow going. Although the orchestral score is reminiscent of FFVII (a game it wishes to emulate), very little else is. When you factor in that the entire game is in Japanese, as an import, there remains very little to recommend it. Pass. 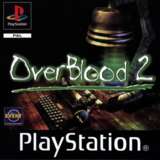 If you were a fan of the original, leave it at that.