Outlaw Golf is a deceptive game, because while its theme suggests fast-paced arcade-style golf, the actual gameplay really isn't like that at all.

Outlaw Golf attempts to separate itself from the traditional golf game with a "unique" cast of characters and suggestive humor, but interestingly, the gameplay doesn't really fall in line with this theme. Outlaw Golf's gameplay is actually a good simulation of the sport of golf and requires at least some knowledge of the game to do well. It's an interesting contrast, and one that seems to alienate both potential audiences for this game, but in the end, Outlaw Golf is still quite entertaining.

Though it has only three 18-hole courses, the most impressive aspect of Outlaw Golf is the sheer number of different modes of play it has to offer. At the beginning of the game, you'll have the option to select from only two modes--exhibition and tour. However, within the exhibition mode, there are eight different types of golf games. You can choose to play through 18 holes normally (the player with the lowest score wins), or you can engage in a slight variation where the player who wins the most holes wins the game. In addition, there are two modes where you can compete for money. One is just a general skins game where you can win money for each hole, and the player with the most money at the end of the 18 holes wins. The other mode is a little more involved because it asks you to either bet money on a particular shot or to pass, and whoever wins the hole wins the amount of money wagered.

Outlaw Golf also includes two team play modes within the exhibition option. One uses the stroke count of the teammate who performed the best at the end of the hole, while the other simply keeps the best shot from either teammate when approaching the hole. So if you slice the ball into the rough, and your teammate lands a ball on the fairway, then you'll play from the fairway. Another of the gameplay modes forces you to choose just a single club and get through a course with that and a putter. However, the most entertaining mode of the bunch is probably the time attack option, where the game will track the amount of time it takes you to finish a hole. You still need to pay attention to what you're doing, though. Otherwise, you'll make bad shots repeatedly, defeating the entire purpose of the mode.

The tour mode gives you an opportunity to face the other outlaw golfers in a tournament setting, and though it's not quite as exciting as the offerings within the exhibition mode, the tour mode is the only way you can unlock additional golfers and clubs within the game. However, the tour mode also has an outlaw range option, where you can challenge yourself to a series of tests that will enable you to win points that you can distribute into your golfer's individual statistics. These tests focus on specific skills, such as putting, and they become increasingly difficult as you progress through the game. It's a nice break from the standard golfing action.

Though there's a tutorial that will take you through the mechanics of the game, the outlaw range is also a good place to familiarize yourself with the way Outlaw Golf controls. Unlike most of the other golf games currently available, Outlaw Golf doesn't use the traditional double-click swing method. Instead, you have to press back on the analog stick or the C stick to charge up the strength of the shot and then press forward when you want to swing. This would be a perfectly acceptable method for a video game golf swing if the direction of the shot weren't determined by the direction you're pressing while pressing forward on the right analog stick. There will be numerous times when it appears that you've perfectly lined up a shot, but then it slices or hooks way off into the woods, a sand trap, or a water hazard. Just the slightest tap to the left or right when hitting the ball can cause it to do just that. It's true that you'll get into the rhythm of hitting the ball straight after a while, but it can be a constant problem for those who don't have steady reflexes. The same could probably be said for the actual sport of golf, but since this game is meant to appeal to a much broader audience, it would have been much more fitting to have a system that didn't rely on such precision. The game should have at least offered a simpler alternative control scheme.

Part of what makes hitting a straight ball so difficult in Outlaw Golf is the composure factor. Basically, the game gauges your golfer's frustration level (regardless of your personal frustration level with the game), and depending on that, he or she will be able to perform either better or worse on the course. Whenever your golfer makes a poor shot, his or her composure level will drop a certain degree, depending on where the ball lands, and if your composure level is incredibly low, it's much more difficult to hit the ball properly. Conversely, if you have a high level of composure, then you have a much higher chance of hitting a ball exactly the way you want to. Occasionally, you'll be rewarded with a "beating token," which you can use to attack your caddy, vent your frustration, and thereby increase your composure. It adds an extra element to Outlaw Golf's gameplay. But poor shots take too heavy a toll on your composure, and since they can occur with just the slightest misstep, you'll almost always have to deal with a low composure rating. In certain modes, you can use a mulligan if your shot is really bad, but your composure rating will still drop, or rise, regardless.

There's a surprising level of depth to Outlaw Golf's gameplay that even hard-core golf fans will appreciate, even if they're put off by the game's silly theme. In addition to adjusting the trajectory of your shot, you can also put different types of spin on the ball by moving a small red dot around the ball graphic in the lower left side of the screen. The placement of the red dot determines the type of spin on the ball, so if you hit it close to the top, you're using topspin, which will help the ball roll farther if it's out on the fairway. Putting is handled especially well--you're given three chances to look at the trajectory your ball will take depending on where you're aiming. This will show different breaks on the green and whether or not your ball will veer off to the left or right. When taking any shot in Outlaw Golf, you'll see a percentage just above your shot strength, which tells you how hard you should hit the ball. Unfortunately, oftentimes this percentage seems to be incorrect--you'll hit the ball with just about the right amount of strength, and it won't even come close to where you were aiming. This is especially problematic during putting because you can literally see the path of your ball before you hit it, only to find that the ball will actually move far to the right or left of the hole.

The GameCube version of Outlaw Golf looks similar to its Xbox counterpart, albeit not quite as smooth. The character models all look good and animate well, particularly during the cartoonlike caddy combat sequences. You'll be able to see individual blades of grass when the ball lies in the rough. There are some nice water effects, as well as other ambient details within the environment, such as birds and planes flying, cars driving over the highway, and a small gallery of polygonal people. But otherwise, the courses look fairly mundane, which is unfortunate since the game's theme suggests otherwise.

Outlaw Golf features full commentary in the form of an incredibly annoying Dennis Miller-like personality who says the same exact lines over and over. This is worsened when you're first playing through the game and choose to use mulligans repeatedly, because he has only three or four phrases that reference mulligans. Thankfully, you can turn off the commentary entirely. The individual golfer voices are tolerable, but then again, they usually speak only after a hole has been finished. The music in the game is pretty horrible, though, as part of the soundtrack is made up of what seem like elevator-music versions of popular songs. There's even one track that sounds vaguely like "California Love."

Outlaw Golf is a deceptive game, because while its theme suggests fast-paced arcade-style golf, the actual gameplay really isn't like that at all. In fact, you'll find an incredibly solid golfing engine that has most of the basic elements of a true golfing simulation. That being said, the control can take quite some time to get used to, and there are some other annoying elements in the game--namely the commentator--but even with these problems, it's still a game that fans of golf will probably enjoy. 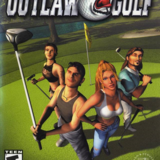 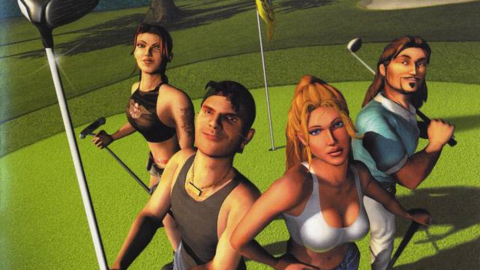 Outlaw Golf is an odd game because it has a theme that seems to appeal to a certain audience, yet the gameplay isn't really for that crowd.