This god-awful Grand Theft Auto clone looks, sounds, and plays like it cost even less to make than it will cost you to buy it.

Some people might argue that the Grand Theft Auto series, for all the attention it gets, wouldn't amount to much if you stripped out the games' top-notch storylines, consistently excellent voice acting, unique sense of style, clever mission designs, enjoyable driving mechanics, engaging combat, and sheer environmental scope. For those who believe this, your messiah has arrived in the form of Outlaw Chopper. This budget-priced PC action game strips out all of the above from the GTA formula, leaving only the most bare, skeletal mechanics required to make for a functional game. And it is functional--but as far as entertainment goes, Outlaw Chopper is completely bereft of anything of the sort.

Outlaw Chopper tells the story of a rogue biker on the hunt for revenge. As said biker, you've just been released from prison after a five-year stint. You were set up by another biker named Blade, who sold you out to the cops, then proceeded to take over your operation while you were wasting away in the clink. Now alone and with no rep to speak of, your job is to work your way through the crime-filled streets of Rockland, doing assorted missions for various criminal types in order to get back what was yours and extract revenge. If this sounds like the basic setup for just about every GTA-esque game from the last few years, that's because it is, but with bikers. Frankly, the story never really comes across as anything but an excuse to get you out on the streets of Rockland, riding around aimlessly and occasionally killing people.

Potentially this wouldn't be so bad, except that the gameplay is the unfortunate combination of achingly dull and badly realized. One key detail that must be made clear from the get-go is that you never, ever get off your bike in Outlaw Chopper. All the missions are built in such a way that every objective merely involves you riding around from place to place. When combat does occasionally rear its ugly head, you're forced to awkwardly shoot or swing your weapon while trying to steer the world's most unwieldy motorcycle at the same time. It would help if you had halfway-decent aiming controls to work with, but sadly, you do not. So instead, you're forced to try and fumble your way through every instance of combat without scrambling to pull up your start menu and frantically click on the uninstall button. This is, of course, a losing battle.

The bike itself is an unholy beast, difficult to steer, even more difficult to stop, and constantly threatening to send you flying after bumping into a seemingly innocuous object at a relatively low speed, or blow up after a few well-placed gunshots by various denizens of the city who are shooting at you for no explained reason. The physics of the bike just feel broken. Trying to slow the thing down is practically an exercise in futility early on, because you literally have to stop braking several blocks before your intended destination, or you're going to blow right past the thing. Likewise, trying to slow down to take sharp turns rarely ever works correctly. Unless you come to a near-grinding halt at every single turn, odds are you'll overshoot the angle and go crashing into a nearby building. Suffice it to say, this gets very old very quickly. It also doesn't help matters that you can only control the bike using a keyboard-and-mouse setup. The game purports to support gamepads, but every gamepad we used popped up a "this button is already bound to another action" error, even when said buttons are assigned to nothing.

As the game goes on, you can improve the feel of the bike a bit by buying new parts for the thing. In fact, right away you should buy the most expensive brakes in the game, because without them, you're hosed. Even with them, you still feel like you have to give way too much lead time in order to come to a total stop, but at least it isn't quite as horrendous as it is with the default parts. Beyond this, you can improve your bike's armor, acceleration, and the like, but these improvements aren't especially tangible when driving around, so it's not hard to feel like you're riding on a mobile money pit.

The game's mission designs run the archetypal GTA mission gamut, but only on the most base level. You'll do assassin missions, tailing missions, robbery missions, race missions, and in the early goings, a lot of courier missions. The trouble with all of these missions is that practically every single one feels tacked on, rather than a part of a cohesive progression. One minute you're murdering enemies, and the next you're delivering invitations to a little girl's birthday party. And with the exception of the combat, there's nothing to any of them. They're like purely mechanical copies of the types of missions you'd find in a GTA game, with no soul behind any of it. You're frequently left with a sense that you're just going through the motions, much the way the developers clearly just went through the motions in designing this game. Things are made a bit more complex by the total lack of a retry option. If you fail a mission, you will have to drive all the way back to where that mission began to start it over, and you'll be forced to watch the introductory cutscene each and every time you start over, as there is no option to skip it.

Graphically, Outlaw Chopper is, in a word, atrocious. Your first order of business will need to be to up the game's resolution to the highest it can feasibly go, because on any resolution but the top ones, the game looks so horrifically pixelated that you'll wonder if the publisher didn't accidentally ship a pre-alpha version of the game. This isn't to suggest that the game looks particularly good in high resolution, either, but you can at least look at the game without wanting to claw your eyes out. Everything in Outlaw Chopper just has an exceedingly low-rent look to it. People, buildings, cars--all of it is overly angular, chock-full of nasty-looking textures, and just plain ugly. You'll also run into plenty of random animation and camera glitches, too. If you drive your bike into a guy that's supposed to give you a mission, he'll magically appear on top of your head every time, and start walking around on an invisible plane in midair. If your bike ever gets in too narrow an alley and you have to back up, the camera will go utterly spastic and try and induce a seizure out of you. The whole game is loaded with goofy stuff like this, many of which are kind of funny the first time you see them, but then just become kind of depressing after a while.

The game's audio is measurably better than the graphics, but not by a whole lot. The voice acting is rather stiff, but the material the actors are given isn't exactly high art, either, so they seem to make do. The basic sound effects are kind of cheesy but not out of place, and the soundtrack is made up of the sort of generic rock and metal you'd expect. It basically sounds like what would happen if Black Label Society made music for TV commercials.

There are approximately a billion games on the market right now that ape the GTA formula, and do it a metric ton better than Outlaw Chopper. In fact, as if the game's horrible gameplay and production values weren't enough of a tragedy, there are actually real, honest to god Grand Theft Auto games available for the PC platform that currently retail for less than what Outlaw Chopper costs. Do yourself a solid, and don't play this game. 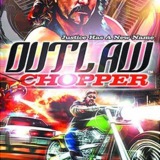