Out of the Park Baseball 11 Review

Another year brings another assortment of subtle improvements to the latest edition of Out of the Park Baseball.

Out of the Park Baseball gets a little bit better every year. The Cadillac of text-based sports sims entered its 11th season this spring, highlighting yet another lengthy list of subtle improvements to its unique take on big-league baseball. At first glance, this doesn't look like a must-have sequel, as owners of last year's game could probably live without the minor enhancements here like MLB rosters out of the box, an overhauled interface, and upgraded historical simming. But many of these additions and tweaks really grow on you, improving gameplay in so many modest ways that you soon won't be able to get along without them.

At the heart of OOTP11 is the same major league baseball simulation that has been released on a more-or-less yearly basis since the late '90s. You sign up with the ballclub of your choice at the start of a managerial career, then guide it through the nooks and crannies of as many seasons as you like, either solo or online as part of a multiplayer league. All of the big decisions are yours to make--setting daily lineups, choosing the starting pitching rotation, figuring out the structure of the bullpen, making trades, renewing contracts, issuing offers to star-free agents, picking young talent in the draft, and so on. This is a complete baseball universe, where you can do just about anything that the Buzzie Bavasi wannabes do in real life on a daily basis around the majors. Or you can even go further afield and take over minor-league teams in North America, as the game supports every organization imaginable from development-league rookie ball all the way to AAA in the international league. The only catch is that all of this outstanding depth is relayed through a text-based HTML interface that you navigate in the same way you'd use a Web browser. Seeing that might be a bit jarring for those coming over from glitzy console baseball games like the MLB: The Show and MLB 2K series. There is no visual chrome here. The closest you even come to "graphics" is in the manual simulation screens, where you watch games played over a rudimentary diamond and follow the action by reading textual play-by-play.

New refinements to the interface make it very easy to find your way around, though. This is the friendliest OOTP yet. Even though you spend much of your time studying dense lists of player ratings and stats, the game practically takes you by the hand on opening day by laying it all out for you. It's nearly impossible to get lost because hints are generously doled out. The manager screen has been completely reworked with icons for key functions and even a calendar that shows big team events in the upcoming few days. Drop-down menus let you access any function with just one or two clicks. Screens can be bookmarked, allowing you to instantly make your way back to menus that you find yourself utilizing on a regular basis. Immersion has been ramped up with more customizable news feeds while the addition of league news and standings updates to the simulation screen keeps you in touch with what's going on around the league when simming games. If you want to ditch some responsibilities, you can always delegate decisions to your bench bosses in both the majors and the minors. Sim times are the zippiest yet, allowing you to plow through a week of action in no more than a few seconds and roar through a season in mere minutes. This is a far cry from the somewhat sluggish OOTPs of the past. Some baseball knowledge is, of course, helpful to get going here because this is a very detailed game. You can get bewildered by the stat acronyms alone because the game now delves into esoteric territory, such as ERA+, OPS+, and FIP. But you don't have to be a walking, talking Hall of Fame fanatic to settle in and quickly start building a pennant winner. All you really need is an interest in the national pastime and a willingness to learn.

Other new features are shinier than the interface tweaks and new stats being tracked. The headline addition is the inclusion of authentic major league baseball players and team names. Now, instead of having to replace fictional franchises and scrubs with big-league team names and rosters provided by modders online, you can get right into a close approximation (the game still lacks team logos and player photos) of the real 2010 MLB season without any fuss. It's a long way from perfect--seeing a scrawny white guy in the pic on C.C. Sabathia's player page will be a bit off-putting for Yankees fans of the hulking hurler--but it is still an improvement for those who want an MLB experience without tinkering with default rosters. Historical play support that lets you step into baseball history at any point between 1871 and 2009 has been beefed up, too, due to a new historical replay mode that optimizes player ratings based on whether you're playing a single season or starting a career. Money is also adjusted over time, so economics move forward here just as they did in the real majors.

You can customize how players are rated at the end of seasons as well; you have the choice of using the core OOTP engine for development, basing development on how players performed in real life, or turning off development altogether. So if you're worried that your take on 1927 will result in an injured Babe Ruth hitting .250 with 20 home runs and screw up his career arc, you can select the latter option to wipe this out to go back to ratings based on what the Bambino did in real life during that eventful season. This is sort of a magic reset button to compensate for potential issues with the simulation, but it does keep evolving careers on track for those who want to run accurate replays of consecutive seasons. That said, the option also kind of kills the fun of the fantasy element of OOTP's historical seasons, where you're free to totally rewrite the record books. Some of the fantasy is already dead on arrival, too, as the illusion of going back in time is somewhat shattered by the Baseball News Network handling league info in the 19th century, players being given uniform numbers decades before that custom began (and the Bambino wearing #38 is just wrong), and a modern ballpark in the background with Ozzy Osbourne clips on the PA when manually simming games.

If you already own last year's game, OOTP11 is not an essential purchase. But with that said, this year's game does more than just tread water with its many incremental steps forward. The interface is the most user friendly it has ever been, MLB players out of the box is a great addition, and the historical enhancements make for more accurate season replays than ever offered before by an OOTP game. So even if you don't need this sequel, you likely want it, and for most diehard baseball simmers, that will be enough. 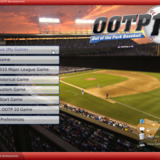