ODT is an effort to capture Tomb Raider-style gameplay in a futuristic setting.

ODT, Psygnosis' cute little acronym for the less catchy "Or Die Trying," is the latest effort from its Paris-based studio, FDI (previously responsible for Adidas Power Soccer). ODT is an effort to capture Tomb Raider-style gameplay in a futuristic setting, with up to four different characters to choose from. On a quest for the legendary Green Pearl, an artifact rumored to be powerful enough to save the world (whatever), our fearless crew members find themselves caught in a furious magnetic storm that downs their ship, the Nautiflyus (who came up with these names?). Once grounded the captain says something along the lines of "Hey, what say I watch the ship, while you guys go running through the wilderness, fighting all the nasty mutants, while trying to find some gas for this thing, and hey, try to bring back that pearl while you're at it!" "Thanks cap, I think I will!" you say and set forth on this gruesome adventure. Gruesome, not because the game is so darn scary and brutal, but because the gameplay is frightening, and the graphics, while certainly ambitious enough, are sometimes just plain ugly. Let's explore.

To begin with, your character has a fairly large number of actions at his disposal. Each character has different strengths and weaknesses, along with the standard punches and kicks. Unlike Tomb Raider or Gex, the protagonists in ODT can use magic spells in addition to their usual arsenal. However, once you get over the array of offensive moves at your command is when the problems set in. As in any third-person-perspective-based game, the camera is usually something of a chore. ODT is no exception. While navigating this exceptionally glitchy world, all manner of pop-up, draw-in, and whatever other technical plagues you can think of infiltrate the presentation. An inconsistent frame rate, while not too bad, still exists to some extent. Not that you'll care when the controls are so aggravating. Digital control is stiff and would have been better served if you didn't have to press "right" in order to rotate to the right, etc. A Mario-esque arrangement would have been far more welcome than this. Analog control, on the other hand is too loose for the precarious situations you'll find yourself in. Let's face it, you're controlling one of four hard-core soldiers, each of whom, you would assume, should be able to watch his or her own step. Instead, you'll find yourself falling off ledge after ledge, time and time again, if you rely on analog navigation. The only remedy to walking in a straight line across a beam is to switch back to digital control. But who the heck wants to leapfrog back and forth between digital and analog control? On top of that, the dreaded platform jumps await as well. Needless to say, between the touchy (or untouchy) controls, crappy response time in button presses, and the inconsiderate camera angles, these little platform exercises are really just a masochistic inclusion that wears out its welcome really fast. Other little things that give this game a rushed feel are actions like climbing down ladders. When you come across a ladder, usually marked by a red arrow over it, you'd assume you'd need your character to climb down it. Unfortunately, there seems to be no way to actually do this; instead, you have to make a leap of faith in the ladder's space. If you don't do it exactly in the right spot, you fall to your death. What kind of logic is this: falling down a ladder? It makes you want to break your controller.

Character animation, while touted as state of the art, is just as glitchy as it gets. Sure, the characters look swell when they're running, but try to use the first-person auto-aiming and your guy twitches like he's got ants in his pants. When you're not required to watch response time suffer at the hands of canned animation and motion capture, you'll be cursing the difficulty in aiming with precision. Thankfully, your shots are so wide you'd have to be Stevie Wonder to miss a target.

On the graphics front, the game engine suffers under the weight of what's asked of it. Ambitious being the key word here, ODT's environments are just too large for the PlayStation to handle. Textures are grainy, the complete lack of Z-buffering is in evidence everywhere you go. Items on the floor appear "through" your character, walls flicker in and out of sight, and complete sections of floor disappear entirely. It really just seems as if the "tiny gray box that could" is simply out of its league here. The characters also could have looked better. While they look OK when viewed normally, the quality suffers when you switch to the neo-first-person mode. Joints look rough and everyone has an amorphous look to him. Granted, there are some nice lighting effects (whoopee!) and other eye candy, but that hardly saves this sinking ship.

Sound in ODT is negligible at best. Voices sound muffled, and the music really fails to leave an impression. Which is a shame since so much of the game is based on silent exploration with the occasional monster to contend with. Which brings us to another flaw: the horrendous AI. Monsters occasionally shoot you (usually because you can't see their brown hides tucked away behind some glitchy piece of wood), but instead of doing anything to avoid your eventual retaliation they just stand there until you plug them full of holes.

Finally, in the grand scheme of things, you sit back and try to look at ODT in a fair light. It is, after all, an ambitious game that certainly tries to be fun. On the surface, all the components are there: a reasonable (if unimpressive) storyline, a fair selection of characters to play as, large 3D environments, plenty of exploring, numerous levels, and a thoughtful amount of options at your character's disposal. The problem is that the game never really does any one thing right and does too many things wrong. Maybe it was merely too much for the PlayStation to handle, but in any case, ODT can't be defined as anything more than a well-intentioned failure. While it would have been great to see FDI pull this one off, sad to say it hasn't. It's best played as a rental, and even that is a hard recommendation. With so many other great games coming out, like Metal Gear Solid and Spyro the Dragon, it's hard to see this as anything more than a footnote in Psygnosis' increasingly lackluster library. 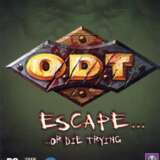