This tactical military shooter delivers tense and engaging action, competently completing its objective in the face of AI blunders and occasional bugs.

Realistically simulating a modern military operation is no easy task. Every element, from the top-level command communication down to the way you reload your gun must be accurately tuned to create a believably engaging experience. Operation Flashpoint: Dragon Rising takes on this formidable challenge, and, for the most part, it succeeds quite well. The campaign is made up of long, tense missions in which you and your squad must traverse kilometers of terrain at a methodical pace, engaging enemies from long range and responding to dynamic battlefield conditions. Success requires patience and execution, and the reward for a completed mission is a strong sense of hard-won satisfaction. While most of the game elements combine to create a realistic atmosphere, there are some issues that hamper your immersion. Some sundry bugs will catch your attention, but the most notable problems occur in the behavior of your allies and enemies, whose battlefield awareness takes some awkward stumbles. Fortunately, you can ditch your computer allies for human ones in the four-player online cooperative mode. There are also two competitive multiplayer modes that offer a more action-packed experience and provide better opportunities to utilize your command abilities. Despite the issues that threaten to steer it off course, Operation Flashpoint: Dragon Rising stays on mission and provides a tough, yet rewarding, tactical experience.

The campaign takes place on a fictional island off the coast of Russia that has been occupied by the Chinese. The slick, stylish intro details the island's embattled history and sets the stage for your insertion. From there on out, there are no more cutscenes. There are just missions and briefing screens, the latter of which are accompanied by stirring Chinese and American musical themes. As you endeavor to complete the 11 campaign missions, you'll engage in a variety of conflicts. One afternoon you'll be flanking alongside an armored advance, while one night will find you and your squad traveling over hilly terrain to scout an enemy target. Each mission has multiple objectives and can take longer than 30 minutes to complete, which makes for a substantially varied campaign.

Though the missions are long, Dragon Rising's inherent difficulty level can extend them to be even longer. This is not an easy game, and it is easy to lose your life in the course of battle. You'll generally engage enemies from long distance, and a foe that is 100 yards away is dangerously close. By being cautious and handy with a scoped weapon, you can usually out-snipe your enemies. But hilly terrain, groves of trees, and small clusters of buildings ensure that you won't always be able to pick them off from a distance. Mortar fire, mounted machine guns, or a few bullets from an enemy rifleman can bring your mission to an abrupt end. On normal difficulty, there are a fair amount of checkpoints throughout each mission, so the penalty for dying is softened. As you bump up the difficulty level, your enemies don't actually get tougher. Rather, the game strips away helpful onscreen elements, such as indicators of your squad's health and the positions of your enemies. With these game elements removed, Dragon Rising feels more realistic, and the action is more tense and immediate. This makes victory taste much sweeter, but it also means that one bullet can erase 45 minutes of progress.

When you do get killed and have to play a section again, don't expect things to play out the same way. Depending on your squad's movement and effectiveness, the enemy may maneuver differently and employ different tactics. The same goes for any allied squads that are accompanying you. This flexibility makes the game more dynamic, and, for the most part, this is a good thing. Having to actively adjust your strategy is an appropriate challenge that adds realism to the proceedings. Yet because events can vary so widely, you may sometimes find yourself in a situation where it is nearly impossible to succeed--or even survive. Sometimes you can overcome these tough spots with persistence, but sometimes, you'll have to bite the bullet and restart the entire mission. Again, Operation Flashpoint's dedication to realism makes frustration easier to come by, which is something players will have to embrace if they hope to enjoy the game.

Unfortunately, there are some causes for frustration that can't be chalked up to realism. These come primarily from your AI squadmates, who occasionally exhibit a serious lack of battlefield judgment. For example, if you are crouched and firing regular shots at an enemy position, an ally will think nothing of walking in front of your gun as he tries to gain a better position. Your buddies can also get confused about cover; sometimes they position themselves on the wrong side of a barrier or just outside of a protective wall. And be very careful about where you issue the "treat wounded" command. In their efforts to find a safe place to administer treatment, your medic and the injured soldier are likely to expose themselves to enemy fire by crossing an open field or leaving the safety of a bunker. There are also sundry movement issues, such as soldiers getting stuck on trees or failing to follow commands. Sometimes giving them a push or a shot in the leg can actually remedy this, and when enemies do similar things, it can be easier to pick them off. Still, this kind of stupidity definitely dampens the realistic tension.

These issues notwithstanding, friendly and enemy soldiers often act in helpful and authentic ways. Your squad usually responds quickly to your commands and tends to be cautious and mindful of enemy positions. Likewise, enemies will go prone when fired upon, head for cover, return fire, and often maneuver to flank your position. You will often feel legitimately threatened, and overall, your enemies feel like trained, battle-ready soldiers. That said, much of the campaign is made up of long-range encounters, and you'll rely heavily on your ability to cut down enemies from a distance. Most of the time, you can command your squad to follow you, and they'll do a good job of staying alive and spotting targets. You can easily issue more specific orders using the quick-command radial or by pulling out your map, and as long as you avoid testing their not-so-great vehicle-piloting skills, they will prove to be more of an asset than a liability.

Alternatively, you can recruit up to three other players and play the entire campaign in cooperative mode. There are some bonus stand-alone missions that can be unlocked as well, and these offer quicker encounters better suited to short play sessions. There are also two competitive modes that support up to eight human players: Annihilation (Team Deathmatch) and Infiltration (defend/destroy the objective). Even at full capacity, every human player can have a squad under his or her command, and providing your teammates have a working knowledge of the command radial, multiplayer matches are intense and hotly contested. Though the AI players suffer from the same kind of missteps, the nature of these conflicts make them more of a strategic asset. The air is thick with bullets and squads are usually on the move in Annihilation, while Infiltration presents a lop-sided strategic contest that is engaging in its own way.

The competitive and cooperative modes round out the game nicely, though they suffer from occasional bugs. For example, your gun may become temporarily invisible or you may shoot bullets that appear to hit enemies, but in actuality, they neither hit nor deplete your ammo count. Both of these can often be fixed by reloading, but there is a certain roughness that can detract from the realistic tone that the game tries to set. Despite its various issues, Operation Flashpoint: Dragon Rising is largely successful in its endeavor. The environments and core action create a great feeling of tension and immediacy. The various weapons and vehicles also give you a great array of ways to accomplish your objectives. With a lengthy campaign and solid multiplayer action, Dragon Rising is a tough and engaging tactical action experience. 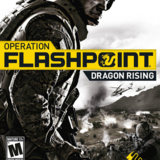