The setting is perfect shooter material, and Operation Flashpoint does justice to it with complex gameplay coupled with a huge and truly memorable gameworld.

1985. The Cold War simmers as NATO and the Warsaw Pact are locked in a grim embrace. Masses of men and weapons stand toe-to-toe, ready to live out the nightmare of World War III. Operation Flashpoint: Cold War Crisis is an ambitious and eagerly anticipated military shooter that turns up the heat on the Cold War, featuring advanced armies and weapon systems doing battle with you in the middle. While the setting may not be entirely relevant anymore, it's still perfect shooter material, and Operation Flashpoint does justice to it with complex gameplay coupled with a huge and truly memorable gameworld.

Operation Flashpoint puts you on the fictional Malden Islands, an area reminiscent of the Balkans. In the extensive single-player campaign, you learn that fighting has erupted on the islands, and at first it's unclear who's involved and who's to blame. As part of the sole NATO presence in the area, it's your job to help liberate the innocent villages caught in the mayhem and determine just what's going on and who's going to pay. Thanks to lengthy and generally well-directed in-engine cutscenes, you'll start to gather the pieces of the puzzle. You begin the campaign as a US Army private engaged in training exercises in an almost idyllic camp. So far, you and your fellow soldiers haven't seen any action during your tour of duty on the islands. That quickly changes, and you get the opportunity to confront enemies, explore the huge islands, and finally move up the ranks for new responsibilities and challenges.

The numerous campaign missions let you assault villages, run patrols, rescue hostages, and engage in a variety of realistic actions. Usually, you play as part of a computer-controlled squad, but one of the dramatic highpoints of the campaign puts you alone, lost in a forest at dawn, trying desperately to make it through heavy enemy patrols to an evacuation point. Unfortunately, the missions rely heavily on scripted events and triggers, which both reduces replay value somewhat and contributes to bugs. Sometimes an event will fail to register, leaving you and your comrades just sitting there with no way to finish the mission or progress through the linear campaign. Despite plausible enemy artificial intelligence, you'll often encounter enemies near the same spots each time you play a mission. Also, the game inexcusably gives you only one save per mission, though you can choose when to make it. Note to game designers: Let players decide for themselves if they want to play ironman-style, particularly when missions can last 20 or 30 minutes like they do here.

Outside of the campaign, which can be tackled on two difficulty levels, you can also engage in varied single missions that you can play in any order, bringing the mission total to around 50. On top of that, Operation Flashpoint includes a full mission editor, and there's a burgeoning mod scene for the game. Multiplayer offers a number of modes, including capture the flag, deathmatch, city defense, and cooperative. The team-based modes have lots of potential but require an exceptional amount of cooperation and coordination between players, which can of course be hard to find on public servers.

Operation Flashpoint's focus on realistic weapons and vehicles helps create exciting gameplay since it blends realism, diversity, and, frankly, lots of big cool guns. As an infantryman, you'll get to blast the enemy with M16 and AK74 rifles, the M60 machine gun, hand grenades, M21 and Dragunov sniper rifles, satchel charges, rocket launchers, and many others. If you don't like the weapon you're assigned, you can always pick up new ones from fallen soldiers, whether friend or foe. Operation Flashpoint offers one of the biggest selections of vehicles yet found in a shooter. You get to ride in or pilot six helicopters alone, including the Cobra, Apache, Blackhawk, Chinook, and Russian Mi-17 and Hind. Then there are ground attack planes like the A-10 Thunderbolt (aka "Warthog") and the SU25 Frogfoot, an assortment of trucks and jeeps, M113 and BMP-1 armored personnel carriers, the M1A1 Abrams tank, Russian T72 and T80 tanks, and more.

You can control the vehicles and your individual soldier from either first- or third-person viewpoints, and movement and firing are controlled through a familiar keyboard-and-mouse shooter layout. You interact with the gameworld through a pop-up menu that offers contextual options like changing your M16 magazine or getting in a jeep as the driver or a passenger. It's an elegant system, but at the same time, it suffers from a lack of hotkeys for all available actions--at least the most important ones like reloading or switching weapons have them. To help you find targets and follow your squad leader's commands, a HUD features optional friend-or-foe and direction indicators, and you also get a compass and a detailed topographical map.

The controls remain largely consistent whether you're on foot or controlling a land or air vehicle, which makes learning the game relatively easy but also reduces the level of detail and realism with the vehicles. Don't expect a hard-core tank or flight sim here. With the exception of jeeps and trucks, vehicles tend to be very twitchy and awkward to control. In some missions, you get to command other troops or vehicle crews, but what should be a high point of the game is hurt by a cumbersome command system that's a chore to use even when you're not taking fire. Also, you can't rely on computer-controlled crews to drive vehicles, thanks to spotty AI when they take the wheel.

Whatever its flaws, Operation Flashpoint really envelops you in the chaos of war. The staccato report of gunfire sounds out from all around; fellow soldiers charge past in search of cover; armored vehicles rumble up dirt roads; enemy soldiers dash between village buildings; and above it all, you hear the constant chatter of incoming radio messages from your fellow soldiers. The feeling of chaos is amplified by the large outdoor settings that largely lack the rooms and tunnels found in traditional shooters that serve to funnel players and focus action. You'll typically engage enemies at very long ranges, where they appear like little specks on the horizon. Because of these distances, as well as very quick deaths, you'll rarely get the visceral thrill of close in-your-face combat or the extended dueling found in many shooters. This may be a case where fun suffers at realism's hands. Also, the frequent feeling of a confused, dynamic battlefield can sometimes leave you wondering exactly what's going on, rather than give the action a sense of tension and excitement.

Still, the world of Operation Flashpoint feels much more alive and immersive than that of most shooters, thanks to unusually high attention to detail. Trucks rattle past military bases where the American flag flaps in the breeze and soldiers do their push-ups. Jeeps kick up dust, leave tire tracks on dirt roads, and feature working speedometers. Missions take place at different times of day with appropriate light levels that actually change during longer missions to reflect the rising or setting of the sun. Your fellow soldiers will chatter with each other, sometimes comically and sometimes just inanely, as your squad is driven to a rendezvous point in a smoke-belching truck or armored personnel carrier.

The emphasis on detail and realism can be almost counterproductive at times, though, since muzzle flashes and falling soldiers usually lack any Hollywood-style exaggeration or melodrama. It feels more realistic, certainly, but you may find that it lacks the sort of cinematic thrill you might want in a game like this. Still, few games have offered such a convincing, consistent, and engaging environment. Operation Flashpoint makes good on the great promise of the shooter genre: the ability to create a virtual world in 3D and then make you feel like you're really part of it.

The game's fine visuals play a major role in making all these details believable. Soldiers cast long, spidery dynamic shadows across hillsides early in the morning when the sun is still low. When an antitank round strikes home, there's a brilliant flash and billow of smoke, leaving only a charred hulk in its wake. The red brake lights on trucks blink on, and headlights cast their beams into the night. Village churches sport the distinctively shaped domes you'd really find in Eastern European or Slavic countries. For perhaps the first time in a 3D game, forests really feel like forests, with expansive, dense stands of trees.

Perhaps more than anything, the detailed faces of other soldiers stand out. It's not merely that they're some of the most realistically rendered ones you'll find in a game but that they're subtly animated. It's intriguing to see a squadmate tilt his head, blink, or move his mouth into a slight frown. Sadly, outside of their faces, the rest of the soldiers aren't rendered in such exacting detail; in fact, they're a little blocky, particularly their fingers. Soldier animations tend to look somewhat jerky, too. That dichotomy holds true for most of the graphics: Highly detailed textures cover 3D models of variable quality. Despite any weaknesses, the graphics still handily complete their mission: They create a believable, entertaining world.

Operation Flashpoint's music feels like it could have been taken from a Tom Clancy thriller film, and while it's not incredible, it fits the story and adds to the ambience. The game's sound effects also do a fine job without ever reaching greatness. Trucks, helicopters, and other machines of war sound convincing, as do small arms fire and explosions. Chirping crickets, barking dogs, and other ambient sounds help draw you into the game. The many cutscene voice-overs vary widely in quality, though mediocre acting is the order of the day, and the game's European origin shows through in the dialogue and optional subtitles, thanks to occasional (but not unduly distracting) awkward turns of phrase or mistranslations. The most conspicuous sound effect also happens to be the weakest: The radio messages from your squad leader and fellow soldiers are important for tracking the action, but they're also incessant to the point of distraction. Worse still, their clipped, robotic delivery will almost make you laugh.

On the whole, Operation Flashpoint's great strengths more than compensate for its weaknesses. At its best, the game combines some of the most exciting trends of the shooter scene. Like Tribes 2, it features individual and vehicular combat on a massive scale, though those elements aren't as well integrated here. Like SWAT 3 and the Rainbow 6/Rogue Spear series, Operation Flashpoint features sophisticated team tactics that test your brain as much as your trigger finger. At the same time, the game's focus on realistic weaponry should please military buffs and perhaps wargamers since the game is arguably as much a realistic sim as it is a shooter. Best of all, Operation Flashpoint offers one of the most believable and immersive virtual worlds to date. While the mechanics of combat can be a letdown at times, the feeling of being in combat grips you at nearly every turn. With many diverse and entertaining missions, an interesting story, and loads of realistic weapons, Operation Flashpoint aims high and hits its mark. 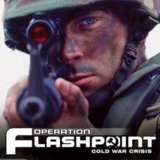 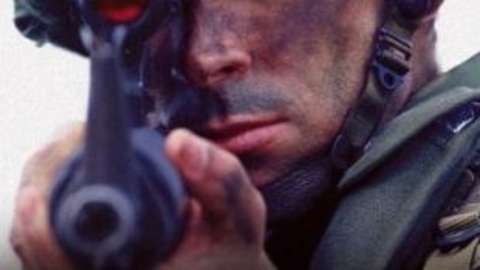 The setting is perfect shooter material, and Operation Flashpoint does justice to it with complex gameplay coupled with a huge and truly memorable gameworld.