Awkward controls and other flaws make it hard to appreciate the innovative and devious puzzles in Open Me.

Open Me is an easy game to put down, both intentionally and otherwise. This augmented reality puzzler for the Vita about trying to open a succession of deviously locked boxes has its pluses, but sensor issues and wonky controls lead to a lot of frustration. If you're not giving up and putting down the Vita because the game's not working right, you're flat out dropping it because of impossibly awkward controls that contort you so much that you might as well be playing a sadistic fingers-only version of Twister.

The concept is straightforward. Open Me creates virtual boxes of various shapes and sizes and plops them down in the real world just below the Vita's camera. Essentially, it blends your surroundings with standard 3D gaming animation. You use the Vita like a remote viewer, moving it around the box that appears to be resting on your coffee table or similar nearby flat surface. To interact with the container, you use the touchscreen. So you need to move the system all around the boxes you must open, manipulating the various levers, buttons, and other gadgets in an attempt to spring the locks and get at the reward inside.

Boxes are devious and numerous. There are around 48 to solve in the basic $10 game, which comes with 12 puzzle packs. Or you can grab the free trial game and then pay 99 cents apiece for the packs on their own. Either way, you get some incredibly inventive puzzles that can be maddening to figure out from the get-go. Some are locked with electronic codes. Some are sealed up with tricky levers that need to be flipped in the right order. Some are equipped with sliders that you have to move around in order to free up a box-opening latch. And some force you to rely on manual dexterity, with quirky buttons that require multiple presses, drags, and more to trigger a lock to release. These can come with punishments like the lid snapping shut on your finger with each failed attempt and you getting just 10 tries to get the box open before having to start over.

It takes a lot of brainpower and manual dexterity to unlock most boxes. You're never stuck, because you can freely move back and forth between boxes in the various packs. Open Me also works as sort of a party game. It's fun to watch someone fooling around with an invisible box, even though this probably isn't the sort of game you would want to play in front of an audience due to the goofy positions you can work yourself into. You can also team up with the local multiplayer mode and tackle boxes from the viewing perspectives of the two systems.

And that's about it for the good stuff. Despite all of the promise in this innovative premise and the wide range of deviously designed puzzle boxes, the developers just can't close the deal. The game asks too much of both the system and you. Getting the game to run properly is hurdle number one. Since you're (sort of) playing the game in the real world, you have to configure both the system and your immediate surroundings. You can't play this game just anywhere; you have to establish a fixed play area on a flat surface like a table and then lay down an AR card with a busy background as sort of a table mat. This is necessary because the game uses it to plot out the marker points that are required to draw boxes and establish where they are in the 3D gaming environment.

Getting your play area ready is a challenge all by itself at times. You can have too much light or too little, or simply not have the light source in the right place. The camera is finicky about what you're using as an AR card. You're supposed to be able to just throw down something like a checkered placemat or even a newspaper, but neither works particularly well. It's best to download and print the game-specific AR background available free online, but even this isn't a recipe for success. Too often you're stuck moving the Vita up and down anywhere from one to three feet over the playing surface trying to get the game to recognize the 40 marker points needed to draw a box and let you get started.

Even when Open Me works, the camera causes some major frustration. You should be able to move boxes by turning the AR backdrop upon which the box is supposed to be resting, but this rarely works well. Doing this can move a box slightly, but try a more significant shift to, say, look at another side, and you're hampered by lengthy pauses where the box disappears, or the box might vanish for good, forcing you to restart the scenario. At any rate, forget about playing the game sitting down. You're forced to hover over the AR mat, walking around with the Vita so that you can get different angles on the boxes. For a puzzle game, you get a pretty good workout here. This isn't the sort of relaxing brainteaser that you could take on the bus to work or into bed at night.

Of course, moving the camera to look at boxes from all angles is one thing. Combine that with the tricky maneuvers you need to pull off to hit the buttons and pull the levers needed to unlock a box, and you've got a formula for a migraine…not to mention a pretty good way to drop your Vita a few times. Some of the contortions demanded are grueling, to the point where you're struggling to keep the handheld in your mitts while manipulating objects with two fingers and still trying to keep the camera fixed on the box so that the screen doesn't blank on you. It's way too easy to mess up.

There isn't enough feedback provided within the game, either. Once you get started in a scenario, it's just you and the box. There are no tactile responses, which would, of course, be a huge part of trying to figure out how to open a real locked container. Feeling around would let you know if a knob could be pulled, if a slider could be pushed in just the right way, and so forth. Here, if you hit the wrong spot, you get nothing but a colored splash on the screen and a thumping sound effect. The game is generally responsive, but it's not perfect. So you're never sure if you're on the right track but not touching the box correctly or if you're off the mark. The odd little hint or comment would help matters immensely.

Even with all of the awkwardness and design problems, Open Me has its strong moments as a challenging and even somewhat likable puzzler. The sheer inventiveness of the boxes can keep you coming back for more, at the same time as the many frustrations drive you away. Still, there are just too many technical flaws in this overly demanding game to recommend it. The AR gimmick has promise as a great way to blend virtual reality, motion controls, and touchscreen gaming, but it has not been realized in this overreaching, flawed puzzle game. 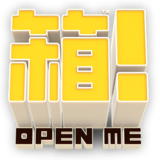