The first time Only If induced rage was when I returned to its single major choice--a point at which you must choose one chess piece over another. No matter which piece I chose, the game surged forward in the same manner, leaving me to wonder if it were passing judgment on the illusion of player agency in video games. Given the way the dialogue often focuses on the player character's lack of control, it was easy to presume that the Italian-American caricature that guides you through the game was playing a role similar to the narrator in The Stanley Parable, pointing out the limitations of the medium through humor and self-aware gameplay. As it happens, I was giving Only If too much credit: the game had simply broken, and returning to the title menu was not a proper fix. Only after closing the game and restarting it did it function properly, shattering not the illusion of player control, but the assumption that I was playing a working product.

The second time Only If induced rage was when the player character called the apparent mafioso taunting him a "pedophilic faggot," a homophobic outburst that may have worked had the character using the phrase been a full-fledged human being rather than a randy adolescent with no empathetic characteristics. Only If had already toyed with homophobia with a bit of throwaway dialogue about "giving the kid the D," but that conversation lingered because of how it informed the plot, not because of its blatant offensiveness. The sputtered "faggot" accusation came later, after I had come to suspect that the game was not in fact a clever mystery but instead a perverted display of bro-dude self-expression. My suspicion was confirmed when Only If concluded with a story "twist" that M. Night Shyamalan might have concocted if he were a drug-addled, sexually frustrated high school senior.

Only If's ending marked the third time the game induced rage, and it was a rage that dogged me as I played the game a second and then a third time, hoping to find signs of a message with greater meaning than the disgusting finale let on, but if such a message exists, it is either too subtle to notice or too unnecessary to care about. Perhaps Only If means to parody games like Proteus or Gone Home, experiences that use simple forms of player interaction to reveal greater truths and subvert expectations, but I don't believe this game has such noble ambitions.

If my thought process is all over the place, it's because Only If itself brings with it no apparent logic, jumping between gameplay styles faster than Mario leaps between platforms. Games have successfully played with player perception of genre and game logic, of course--Thirty Flights of Loving is one great example of this kind of thematic skewing--but Only If's gameplay is frequently busted and typically uncomfortable. It all begins after you've awakened after an apparent night of intoxicated debauchery and sexual romping, with an angry voice taunting you via old-fashioned radio.

Soon after, the voice leads you to an opulent room in which a chessboard rests on a table and landscapes adorn the walls. Only If then presents a choice that's meant to be uncomfortable, but most discomfort comes from the game's own screen tearing and jittery behavior in these early minutes. At this stage, you might suppose Only If is a puzzle game, but if it is, it's a terrible one, providing the exact steps to the task at hand both here and elsewhere, and never allowing your imagination to blossom. In any case, the choice leads to one of the game's two branches, one of which leads back to this same parlor and forces you to make the other decision anyway. So much for facing the consequences of your own selfishness, which the foul-mouthed narrator intimates is the purpose of the 45 minutes of gameplay that follow.

Those 45 minutes are indeed a punishment, but for you the player, as opposed to the manchild you control from a first-person view. A few vignettes are sewn together, each providing an arbitrary rule for you to follow, such as running toward an orb before the walls of the surrounding limbo close on you, determining whether the button prompts wish you to press the assigned key or quickly mash it, or navigating a marsh without colliding with a patch of floating darkness or inadvertently wandering out of the level. This is trial and error gone wrong, with Only If chastising you not for failing to overcome an obvious challenge, but rather for not being able to read the creator's mind. After these random scenes of weirdness, you must escape a house where more capricious rules govern your direction, and where puzzles are so tedious that even the main character himself complains about them.

In spite of the clumsy gameplay and abysmal storytelling, a few ideas glimmer just brightly enough to grab your attention. On specific occasions you hear the voices of armed pursuers and see the beams of their flashlights, and while these unseen stalkers can catch you, you never see their bodies or faces. Such moments provide a twinge of intensity, forcing you to run away or find the prescribed hiding place so that you can catch your breath. The other story branch brings with it a new set of environments and metaphysical exploration, and there, too, you notice beacons of hope: puzzles in which you type out commands on your keyboard, attractive pastoral music that matches the beauty of the vibrant flowers and blooming trees that surround you, and enough enigmatic visual and audio cues to make you wonder about the nature of this world and your place within it.

Any goodwill Only If earns only fuels further disappointment, however, dwindling away during a tragic platforming sequence that highlights the game's unresponsive controls and incessant glitches. Eventually, the bite-size levels lose any sense of continuity, with every new pseudo-clever mechanic seemingly pulled from an ever-rotating bingo ball cage, and each sequence glitched or bugged in some manner or another. The insulting finale may be devoid of creative worth, but it at least signals the end of an experiment that was best left unperformed.

Given the appropriation of elements associated with narrative-driven exploration games like The Stanley Parable, you'd suppose that Only If were trying to communicate something meaningful. After all, buggy behavior and clunky locomotion make it a mechanical failure, leaving the story and themes to make good where gameplay could not. Alas, irredeemable characters and loathsome dialogue aren't appropriate pillars upon which to erect a substantial tale. The collapse was inevitable; Only If's wretched ending only ensures that the construct's remnants are reduced to unrecognizable rubble.

View Comments (150)
Back To Top
2
Terrible
About GameSpot Reviews 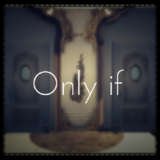 Kevin VanOrd is no stranger to story-driven mysteries, but he wishes he'd never unearthed this one. He spent about five hours with Only If--enough time to have played it thrice. 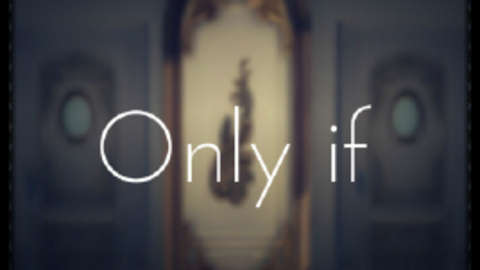 Only if is a short surreal adventure puzzle game developed by Creability.