One Must Fall: Battlegrounds Review

There certainly isn't anything else out there that's quite like it, so fans of other fighting games should give it a look.

Unfortunately, the PC doesn't see many original fighting games. Though it's received a handful of ports over the years, most of the attempts to bring original Street Fighter-style action to the home computer have been total failures. One of the lone standouts is the 1993 release of One Must Fall 2097, a robot fighting game that followed the Street Fighter concept by presenting the action from a side view and giving each robot a handful of special attacks. It moved well, contained a good variety of characters and options, and was generally fun to play. Now, a decade later and after years of prerelease chatter, Diversions Entertainment has finally released a follow-up with One Must Fall: Battlegrounds. This new One Must Fall attempts to stay in the fighting genre while also presenting a free-roaming, fully 3D game for up to 16 players. It's a fun take on the fighting genre--once you manage to familiarize yourself with the controls--but some of its radical ideas work better than others.

Battlegrounds puts you in command of a pilot character that controls a giant fighting robot via a neural link. Apparently, this brand of robot fighting has become a popular sport in the future, so your pilot will have no shortage of opponents to face in a handful of different tournament settings. While the single-player game attempts to convey a bit of story here and there, it's mostly limited to some prematch chatter from the other pilots. Each pilot is rated in four different categories. However, the real difference is in the robots themselves.

One Must Fall gives you eight different robots to choose from. Each has its own set of strikes and special attacks. Additionally, each robot has at least one projectile attack, and, fortunately, the game has a pretty good aiming system to help you fire your blasts accurately. The game also has its fair share of rising and dashing attacks, and each robot features a few different superattacks, for good measure. The use of these superattacks are governed by an energy meter that fills as you play. Most of the superattacks are just pumped-up versions of your robot's special moves, though. Battlegrounds uses six buttons in all, one for each of your robot's limbs, one for jumping, and one for evading. Since the game takes place in a fully 3D arena that lets you roam around at will, the evade button is incredibly handy. The robots don't turn very quickly, and you don't have the ability to execute side or rear attacks, so using the evade button to roll out of the way or to perform backflips is key to dodging attacks and preventing enemies from sneaking up behind you while you're attacking another opponent.

The centerpieces to a fighting game's longevity are its balance and the depth of its combo system. The various robots seem pretty balanced, though some of the robots can get a little more combo-crazy than others, especially in some of the game's walled arenas. The game's combo system is very focused on pop-up attacks and juggles. A handful of the game's regular moves will pop a target up into the air. From that point, you can swipe at them while they're coming down and get in a few extra hits. Some robots, like the Katana, have a rising attack that will launch an opponent into the air. The Katana travels up with the enemy robot, and once you come out of the striking animation, you can land a few extra hits. You can even combo some of these moves into and out of supermoves. All in all, One Must Fall's combo system isn't the deepest in the world, but rather than stick to a somewhat rigid system of canned combos, it goes for a slightly more free-form feel that lets you try out new things.

Though the game has a good deal of single-player tournament options and various difficulty levels to choose from, fighting game AI only goes so far. Competitive multiplayer is where the genre gets most of its replay value. As mentioned, One Must Fall: Battlegrounds contains online multiplayer for up to 16 players. When the players all have good, fast connections to the server, this works fine. However, trying to fight a laggy player isn't any fun at all. Your hits don't land, the other fighter skips around the arena, and so on. The game has two multiplayer modes. Last man standing gives the last remaining player in a round one point, and play continues until a point limit is reached. In demolition, you earn points for causing damage, and the game ends when a point total has been reached. Both games can also be played in team variants.

One Must Fall's robots look pretty nice, though the game doesn't do a very good job of conveying the supposedly gigantic size of the fighters. The arenas come in various shapes and sizes, and some of these look good, as well. However, the animation leaves a bit to be desired. For example, you'll execute the same attacks regardless of your posture. So, if you're running and hit an attack button, you don't get any sort of running attack. Instead, your robot just plants its feet and goes through the same attack animation that it would if you were standing still. A lot of the basic walking and movement animations aren't very good, either.

Basically, the game really lacks polish from start to finish, from the menus to the generic-looking particle effects. The game is also pretty processor-intensive. Though the listed requirements aren't terribly steep, the frame rate is pretty jumpy on systems that are well beyond the 1 GHz recommended processor. When we moved it up to a Radeon 9800 Pro and a 3 GHz processor, the game ran very smoothly at the default 800x600 resolution, but moving the resolution up much higher than that had a noticeable impact on the frame rate. The game actually looks decent at 800x600, though, so this isn't that much of a problem.

Battlegrounds' sound also could have helped convey the size of the robots by using loud, bass-heavy footsteps, but the game unfortunately doesn't have anything like that. Most of the sound effects consist of pretty uneventful metal-on-metal clanks and crashes, as well as your standard laser and projectile effects. The music consists of a bunch of upbeat melodic tracks that sound like they were ripped out of the Amiga demo scene. As a whole, the game's sound gives the game a sort of throwback feel that's indicative of its decade-old roots.

One Must Fall: Battlegrounds is a pretty unique take on the fighting genre. There's definitely something to it, but not all of its concepts hit the mark just right. For instance, the game would have been better if the robots had back attacks or other, better options to prevent enemies from getting behind them. Regardless, there certainly isn't anything else out there that's quite like it, so fans of other fighting games should give it a look. 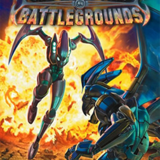