Okamiden doesn't distinguish itself from its revered predecessor, but great visual design and well-developed characters make it engaging nonetheless.

As the son of a wolf goddess, Chibiterasu was born with extraordinary powers. With a few splashes of ink from his celestial paintbrush, he can summon a bomb out of thin air, slice a boulder in half, or conjure a barrage of fire. Having such powerful tools at your disposal makes it sound as if Okamiden is another game that focuses on death and destruction, but that couldn't be further from the truth. Okamiden is a game about breathing life into a corrupted land, and as you chase away the evil demons populating this haunted world, it's hard not to be struck by the beauty bursting forth all around you. That beauty serves as the strongest incentive to explore every cove and copse, and it has to carry the load because the unimaginative gameplay fails to deliver the same enchanting pull. Forgettable puzzles and mundane combat lack the vibrancy that could have made Okamiden something special, and the clumsy controls often get in the way of your peaceful travels. Despite the prosaic backbone propping up this ethereal adventure, Okamiden exhibits such a gorgeous and enticing world that it's easy to be sucked into Chibiterasu's plight.

Okamiden is the sequel to the beloved PlayStation 2 classic Okami, which puts it in a difficult position. A divine wolf curing the ails of a dying world has already been done, so the uniqueness that separated Okami from its peers no longer exists. But what's fascinating is how this game's struggle to stand out from the shadow of its predecessor mirrors the problems the main characters face. Chibiterasu is just a wolf cub. And though his powers echo those that his mother, Amaterasu, had when she saved Nippon, they are not as diverse or powerful. Kuni, one of a few companions you team up with along the way, is in a similar position. He is the son of Okami's legendary hero, Susano, and wrestles with the lofty expectations he inherited. Forging your own path through life and creating an identity of your own is one of the major themes of Okamiden, and through smart dialogue that vacillates between humorous and touching moments, the story keeps you invested in the characters and the fate of the world.

Okamiden is a sprawling adventure that takes place in a world populated by villages, dungeons, forests, and all manner of lovely vistas. You control Chibiterasu, though the citizens you meet along the way have no idea who you truly are. They air out their problems to the human companions who accompany you on the journey, and they don't realize their prayers have been answered by the furry little pup right in front of their eyes. Your powers come from the celestial brush you carry with you. You freeze time by tapping either shoulder button and use the touch screen to draw whatever tool you desire. A horizontal slash cuts boulders in half, outlining a broken object makes it whole, and drawing a circle in the sky beckons the sun. You learn more powers as you get deeper into the journey and transforming the land is an empowering feeling. However, almost every one of your abilities has been culled from the same pool as Okami's, giving Okamiden a serious case of deja vu. And to make matters worse, the touch-screen controls don't always respond properly, so you often have to draw the same symbol multiple times before it registers. Restoring dying trees to their living glory is a simple pleasure that keeps on giving, but too many of your drawing activities fall back on the old ideas that sprung forth from Okami.

You use your powers to overcome obstacles that stand in your way. Once you learn how to draw a bomb, you can get through any wall with a crack in it, and the steady pace in which new abilities are handed out means you have to backtrack to uncover every secret. There are tons of nooks and crannies to uncover in Okamiden, and running through the world to find hidden treasures is a reward in its own right. This is a gorgeous game with a visual treat around every corner. The delicate artistic design uses pastels to give everything a soft touch, and the striking contrast between the dark corrupted areas and the bright cleansed sections gives you a worthy incentive to ensure every place is brought back to life. Chibiterasu is absolutely adorable, with a basket of cute mannerisms that make him immediately endearing. When Kuni calls him "Mutt" toward the beginning of the game, the lovable wolf looks forlornly down but accepts his new nickname. When you defeat a boss, Kuni grabs Chibi by the forepaws and dances with him in a circle. Okamiden elicits a heartfelt "awww" with surprising regularity, and you can always count on something new to make you smile.

There are dungeons spread out across the land that you must clear if you want to cure this sickly world. Each labyrinth you enter does a good job of mixing up the abilities you need to use so you don't get into the rut of using the same technique over and over again. You may need to summon a bomb in one room and then latch on to a far-away plant in the next, and the diversity makes you face each new obstacle with an open mind. However, despite the variety on offer, the difficulty is disappointingly low. Because it's obvious what power you need to use to pass each danger, you rarely have to think too hard before the path to success opens up. Seeing what awaits you in each room brings with it a sense of expectancy, but the puzzles are too tame to stump you for very long.

The combat has a similar pitfall. Although it's fun to take down the evil demons standing in your way, they don't pose much of a threat. Slamming on the attack button while tossing out an occasional celestial slash is enough to dispatch most enemies, and you rarely feel as if your life is in danger. The bosses are at least more interesting than the demonic goons who are such pushovers. Each boss has a specific weakness you must exploit, and though it isn't too difficult to figure out what to do, they can at least put up a fight for a little while. What they lack in challenge, they more than make up for in spectacle. The bosses are oversized demons, after all, and they do everything they can to avoid relinquishing the stronghold they have on Nippon. A treacherous catfish is the most stubborn of all your foes. He absolutely refuses to die, and the extreme methods you have to go through to finally win make it a fight that's not only memorable, but exhilarating as well.

Okamiden sets out to rise above the shadow of Okami, but it never achieves that goal. It's just too similar to the PlayStation 2 original, so it struggles to establish an identity of its own. But despite the familiar ground it travels, this is still a good game that captures the unmitigated pleasure of bringing life to a dying land. Okamiden is a beautiful game, and it uses its artful setting to lure you into this world and care about the events and characters as if they were real. The shallow gameplay lacks the imagination that could have made it stand on par with the gorgeous sights, and some touch-screen annoyances get in the way of your carefree creation. But despite Okamiden's few missteps, it's a pleasure to explore this fanciful world and uncover every secret it has hidden. Okamiden doesn't make a name for itself, but this is still a joyful game that is easy to lose yourself in. 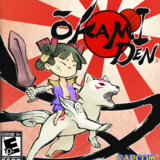