For the young at heart.

Fairy tales are rarely complex, but from their simplicity grows profound truths that resonate with both young and old. Odin Sphere Leithrasir tells five such tales, all intertwined into an overarching volume, each story glowing with heartwarming sincerity and clarity. Like in fables of yore, you can always tell who the bad guy is going to be, and love arrives with the chirps of bluebirds and the calls of trumpets. You could accuse Odin Sphere of too much telling and not enough showing, but its genuineness slips right past such criticism. You can’t stay cross with it any more than you can stay cross with a bright-eyed puppy playing in dandelions. It’s too earnest, too kindhearted, too sweet for that.

Well, I suppose you might get a little cross. One of the five playable characters, the fairy called Mercedes, makes an insufferable squeak when performing actions like reloading her bow, and the recurring “blathering ingenue is forced to prove her worth” theme repeats often enough to get maudlin. But like any softy, I am as swept up by the fantasy as I was when Odin Sphere was first released in 2007. The first chapter, starring the Valkyrie Gwendolyn, sets a whimsical tone for the game to follow, and its tale of improbable love and family tragedy is still my favorite of the lot. Developer Vanillaware’s trademark painted visuals do much of the work in this regard. You can’t help but gawk at the starry sky from Gwendolyn’s balcony, or at Gwendolyn herself, whose three-tiered dress in certain story scenes is the very essence of Disney fairy-tales. Or consider her father Odin, whose cape flutters wondrously behind him on winds of unknown origin. (Or perhaps on the winds of his own farts. Who’s to say?)

Such is the power of a colorful tale that only in retrospect do I wonder if Gwendolyn wasn’t suffering from some form of Stockholm Syndrome, given the nature of the romance she gets involved in. Regardless, it’s the kind of romance you see in musical theater or in opera, where all it takes is the space of a song and a few coy gestures for you to be believe a couple has fallen in love. And so it goes from beginning to end, introducing you to, among others, a prince turned into a bunnylike Pooka; a troubled survivor trying to prevent the very end of the world; and the queen of the netherworld, whose spitefulness makes that of Sleeping Beauty’s Maleficent pale in comparison.

The five main chapters, as well as the ones you might unlock if you’re industrious enough, wind in and out of each other, lending new perspective to previous plot points. This entails a certain amount of repetition--you see the same characters from new angles, while traversing the same areas and encountering the same enemies. Yet Odin Sphere Leifthrasir is largely successful at fending off monotony, engaging you with its action-packed combat, and by keeping battles short and sweet, much like Gwendolyn herself.

Structurally, Odin Sphere is a role-playing game: you level up as you play, and spend skill points on new magical abilities, and upgrades to abilities you have already unlocked. Moment to moment, Odin Sphere is a 2D beat-em-up in which you string together slashes, aerial juggles, slide-kicks, and so forth until the screen is awash with wind and flame. Every character is responsive to your button-presses and stick-nudges. Whether you’re armed with Oswald’s sword or Mercedes’ bow, murdering ice trolls and salamanders always feels fluid and natural. It certainly helps that the frame rate holds up beautifully, whereas the original performed disastrously.

You can further mix up the combat rhythm by tossing a single-use spell flask into the mix, thus summoning a volcano onto the battlefield, or enveloping the area in a toxic cloud. Enemies sometimes drop such flasks upon defeat, but you can also make them yourself using Odin Sphere Leifthrasir’s alchemy system, which benefits from a nice interface upgrade over the original. Things can still get a bit fiddly: there’s no obvious upside to your limited inventory space, so you end up backtracking through levels to get to a storage chest, which muddles the pace. But Odin Sphere’s flashes of brilliance overshadow its bungles.

The way health and leveling are handled is one such example. You can plant seeds almost anywhere and grow plants that yield various fruits, or even sheep. (Yes, sheep, which yield tasty lamb chops.) You can also visit a restaurant and order some victuals, or call on the traveling chef, who unfolds his table with unparalleled stylishness. Wherever your treats come from, they not only restore your health, but they also grant experience points. It’s a terrific confluence of two systems that grants you both a short-term recovery benefit (healing) and a long-term recovery benefit (gaining levels and growing more powerful). It also minimizes grind, since you needn’t engage in unnecessary battles to level up. The downside: eating when your health is full can sometimes feel like you’re wasting the benefit, but you are rarely short on edibles, so the sense of waste is more of an emotional response than a practical concern.

You see the same sights and converse with the same people again and again, but the brevity of battle and the incessant supply of rewards and accompanying triumphant music keep the atmosphere lively.

Level design is another example of Odin Sphere’s cleverness. Though each side-scrolling level is functionally flat, it’s actually a circle, so you always end up back where you started if you run in a single direction. It’s not a novel concept--Defender was doing this back in 1981--but this device makes Odin Sphere easy to navigate, and its minimaps easy to understand. Furthermore, levels are small, and standard enemy encounters usually last under 45 seconds. You’re rewarded with a score and a reward for your prowess--a delightful showering of coins, and perhaps a new recipe, a flask, or an equippable accessory. You see the same sights and converse with the same people again and again, but the brevity of battle and the incessant supply of rewards and accompanying triumphant music keep the atmosphere lively.

Note that the combat system is not as it was in the original, though a slightly enhanced version of the original is included in this package, if you prefer it. On the whole, Leifthrasir is smoother and quicker than the original, not only due to new moves and attacks, but also due to a change to the power meter. No longer does power decrease with standard attacks, except in Mercedes’ case, and no longer can you damage yourself with your own spells. These are fundamental changes that makes boss fights easier than before, and allow you to play more offensively. I like the new system, frankly, but I also found myself wishing I could enjoy the new presentation--new scenes, new visuals, greater field of view--while using the original combat. If you want to see the new content and presentation but prefer the old battle system, you’re out of luck.

That’s a disappointing turn of events if you’re one to resist change, but I prefer the new combat, all in all. It’s snappy, it’s got momentum, and it keeps me in the thick of the action, whether I’m fighting off fairies and frogs, or whether a gargantuan dragon is charging at me. He’s a lovely dragon, too, with a throaty baritone delivery and a desire to help you out, even if you just spent the last few minutes slashing at his scales and setting him on fire. He’s one of Odin Sphere Leifthrasir’s many joys, though he’s not the game’s sole defining element. There is Cornelius’s dramatic pose as he receives rewards; there is the dwarven skyship, and all the Steampunk sensibilities it entails. If I had to choose just one detail as a favorite, however, it comes back to Maury, the traveling chef, and the enthusiasm and flair with which he unpacks his supplies. He brings to his world the same amount of cheer that Odin Sphere Leifthrasir brings to me--and who couldn’t use a little more cheer? 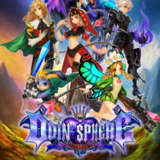 Kevin VanOrd will soon be joining Larian Studios to write for Divinity: Original Sin 2, and is also working with Cleaversoft as a designer for the upcoming EarthNight. He was glad to find 40 hours or so to spend with Odin Sphere Leifthrasir. He’d love to see Vanillaware’s strategy game GrimGrimoire also get the HD treatment, though he isn’t holding his breath.