Stranger's Wrath is a great game that brings together a few styles of gameplay startlingly well.

Oddworld Inhabitants, the creator of the Oddworld universe, has turned out a few fairly different types of games set in the same unique universe. Abe's Oddysee looked like a 2D platformer, but was really more of a puzzle game, constantly forcing you to find the right path through a number of sticky situations. Abe teamed up with a wheelchair-bound fishlike thing named Munch for Munch's Oddysee, which took the puzzle-solving to 3D and played off the two-character team for much of its gameplay. The Oddworld series now sees its most drastic change yet with the release of Oddworld Stranger's Wrath. The new game's emphasis on action and its attempt to combine third-person platforming and first-person shooting means that this new Oddworld has little to do with previous games to bear the name, but regardless of its place in the franchise, Stranger's Wrath is a great game that brings together a few styles of gameplay startlingly well.

Stranger's Wrath may take place in Oddworld, but it also starts out with an Old West theme. You play as Stranger, a bounty hunter of unknown origins. You seem to be the only one of your kind around, and you'll spend most of the game taking on outlaws who are terrorizing various towns full of chicken-men. Why? To pay for your operation, of course. Near the start of the game, you'll discuss a mysterious operation with the local doctor. It seems that you need 20,000 bucks to pay for a procedure, and you'll earn the money the only way you know how: bringing in the bad guys. Along the way, you'll discover more about Stranger's origins and the nature of this secret operation. The game's plot, conveyed through the occasional cutscene, is definitely one of its strong points. It starts slow, but the gradual buildup pays off at the end of the game's roughly 15-hour adventure, which makes up for a lack of extras or alternate modes of play.

Stranger's Wrath combines a few different methods of control for a nice hybridization of multiple styles. The game's third-person perspective is where you'll do most of your jumping and rope climbing. It's also where you'll execute your melee attacks. Stranger can ram foes with a head-butt maneuver or knock them around with a Crash Bandicoot-like spin punch. You can also drop into a first-person view by pushing in the right analog stick. While it's nothing new for third-person games to allow you to get into first-person for a more-controllable view, Stranger's first-person view essentially turns the game into a full-fledged first-person shooter. You can still double-jump while in this view, but you'll move a bit slower, too.

Rather than go the standard FPS route of giving you newer and bigger guns along the way, Stranger's Wrath sticks you with one weapon--a crossbow--but gives you a variety of different ammo types. The crazy thing is that your ammo consists of bugs and other small forest creatures. This means you can hunt for more ammo if you need it, though you'll never need to spend a great deal of time doing so--the game usually provides you with good hunting spots right before each major conflict. Your default ammo is a lightning bug that charges up when you let it sit for a second or two. The normal shot is essentially worthless, but when it's charged up, you can use it to power bridges and other things in the environment. It also stuns most normal enemies with one shot. For faster, more effective stunning, you can collect spiders and shoot them at your foes to web the targets up for easy capture. As far as the other ammo types are concerned, skunks produce a gas cloud to incapacitate your enemies, bees come together to create a machine-gun effect, chatty squirrels can be used to lure enemies away from the pack so you can do them in silently, and so on. You'll even get your paws on some explosive bats that do some heavy damage when fired.

While you'll have a variety of ways to take out the opposition, the important thing is what you do with them after they're stunned. As a bounty hunter, it's your goal to bring the bad guys back alive. You capture enemies by running up next to a stunned foe and holding down the X button, which activates a vacuum that will suck the enemy up. Live enemies are worth more than dead ones, so it's in your best interest to stun them, rather than unloading on them with the heavy artillery. As you move through the game, it gets harder and harder to bring 'em back alive, but eventually you won't need to worry as much about purchasing upgrades--like extended clips and faster reloaders--so the money won't be quite as important.

Stranger's well-being is represented by a life meter and a stamina bar. Some moves require a little stamina to use, and standing still or moving slowly lets you regain stamina pretty quickly. There are no health power-ups or any other recovery items in the game. You regain health by merely "shaking off" your wounds. This move uses a lot of stamina, but since stamina regenerates, this means that you can go into almost every major confrontation with full health. This may sound like it makes the game easy, but the benefits of ever-flowing health are offset by the fact that enemies' shots do quite a lot of damage to you. You might have enough health to stand in the line of fire to quickly capture a nasty foe, but after that, you'll need to run as fast as possible to safety to recover. This forces a fairly cautious style of play, though since you can save anytime, death isn't a huge punishment. If you get stuck on one particular encounter and die there a few times, the game will give you a hint on how to proceed. The stick-and-move style of gameplay can get to be a little much in some of more enemy-laden areas, but for the most part, the health and stamina bars are good additions that ensure that you're usually making some sort of forward progress instead of getting hung up at every single conflict because you arrived and saved there with very little health.

Most of the game has you going up against a few different types of enemies. These enemies aren't too bright, though they at least understand the concept of hiding behind cover. While you'll run into a ton of standard troops along the way, your real targets are the bosses. The game's boss fights all play out fairly differently, even though the basic tactic of eliminating all the standard enemies from the area before firing everything you have left at the boss still applies. Some of these encounters are deviously tough, since the game throws enemies at you in large numbers. Your ultimate goal in each battle is to try to stun the boss so you can take him back alive for the maximum bounty, but stunning some of these guys is a tough, tough task. The difficulty of the boss battles doesn't scale up all that evenly (some of the mid-game bosses are the toughest you'll face, but the final encounter is a cakewalk), and only a few of them are especially memorable, but they still break up the action nicely.

While the sound effects and music in Stranger's Wrath are strong, the game's voice work really drags the rest of the audio down. Individually, the crazy chicken people you'll be talking with in town are fine. They have a Western twang to their speech that fits the game's theme fairly well. However, there really seems to be only one or two voices for each race. Each chicken-filled town you get to will sound identical to the last, each boss talks in an almost identical artificially deep voice, and the grubbs you encounter in a few places all talk with the same voice. The grating repetition and occasionally poor performances make it difficult to care at all about any of the game's characters other than the Stranger himself, who has a good, deep voice of his own. But to further compound the game's voice problem, all the speech is sampled at a horrendously low bit rate that makes every line of dialogue scratchy, muffled, and occasionally very difficult to make out. Some subtitles would have been a smart inclusion, but sadly, they aren't present. By comparison, the music fits with the themes of the game well, though some of the longer battles have some slightly repetitive music associated with them. The sound effects deliver the standard array of smacks and slaps that you'd expect from melee attacks, but the real stand-out effects come from your crossbow. Each type of ammo sounds different when you load it up, and some of the little creatures even make noise as they sit on the crossbow, waiting to be fired.

The look of Stranger's Wrath is really sharp. The game runs at a solid frame rate and basically gets all the technical things down just fine. The textures are clean, there are very few loading screens, and the character models look great. But the style of the game's graphics outshines the technical side. Stranger simply looks cool, and the Old West-style towns and ravines you run through are neat. Later on, you'll venture into very different-looking areas, and these are also well constructed. Owners of widescreen, 480p television sets will get a wider, sharper picture, but the difference between the two modes isn't dramatic.

There are a lot of great things going on in Oddworld Stranger's Wrath. The game manages to combine its third-person and first-person viewpoints extremely well, and the little things, like using bugs and rodents for ammo, really give the game a unique flavor. It's always interesting to see new twists on old action formulas, and it's even better when the new twists pay off and combine to form something that's better than the sum of its parts. While the disappointing voice work gets in the way fairly often, it's still minor in the grand scheme of things. If you're looking for an exciting action game with a unique sense of style, then Oddworld Stranger's Wrath is a perfect fit. 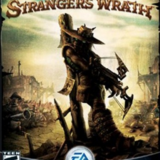