A wink to the past.

If imitation is the sincerest form of flattery, then Oceanhorn: Monster of Uncharted Seas is developer Cornfox & Bros building a candlelit shrine to The Legend of Zelda series. A more appropriate subtitle for it would be, “The names have been changed to protect the innocent.” It'd be one thing if Oceanhorn achieved a similar level of greatness as its inspirations or riffed on Zelda's core concepts in a meaningful way. But mostly, Oceanhorn's greatest achievement lies in accentuating the brilliance of those inspirations, rather than taking them to exciting, uncharted territory.

Oceanhorn begins strongly enough. Our protagonist's father writes a final letter to his sleeping son before he goes off to face an eldritch beast of the deep, the titular Oceanhorn. When our hero awakes, he meets up with the local hermit for a quick lore lesson, then sets out on a top-down-perspective adventure across a series of scattered tropical islands to find his father--and maybe take down big bad Oceanhorn himself.

Right from the start, Oceanhorn is simple and intuitive. It's nostalgic and refreshing to set out on a hero's journey, and the only two things you need to know for a stretch are that the analog stick moves you, one button attacks, and one button allows you to move objects. Targeting happens automatically, and you rarely deal with more than one enemy at a time--and 90 percent of that time, flailing wildly with the basic sword is enough. This feels like a blessed side effect of Oceanhorn being ported from mobile--the original having released on iOS in 2013.

Such accessibility is appreciated, but modest aims elsewhere prove to be an issue. Most of Oceanhorn's puzzles are either of the rudimentary, block-moving sort or involve walking around long enough to find the key to the next room. Strangely, when a puzzle deviates from the norm, it often requires an illogical solution, like pushing a box through another physical object. The simple dungeons you explore are padded out by leading you to a certain point only to learn that you must look for an item elsewhere--which just so happens to be located on a whole other island, requiring a frustrating amount of backtracking.

Disappointment sets in once you realize that all of this effort leads to little payoff. The story doesn't take any major twists and turns, and NPC characters are stock townsfolk who exist purely for the sake of exposition. Journeys between towns and islands are taken by sailboat, a nod to The Legend of Zelda: Wind Waker. But Oceanhorn's seafaring is even more sparse and uneventful than exploring a village. Voyages transpire automatically once you point your ship toward an island, but sailing on rails robs you of completing the trip by your own efforts, diminishing the world's sense of scale in the process.

It's still a fundamentally unimaginative example of the genre it's aping, and completely fades out of memory the second you remember there are other fish in the sea.

There's also the issue with voice acting, which is sporadically used in a way that does not mesh well with Oceanhorn's storytelling. A conversation will start in text, then, suddenly switch to voice-over. Tone and expression also fall flat in the face of dramatic moments: while the exposition from the hermit inhabiting the main island is okay, a bunch other NPCs fail to match the tone set by the script. When you save the leader of a race of owl-men, he expresses his appreciation zero inflection. Not-Link saves a girl later in the game, and they watch the town festival from a hilltop, and her "I want to go off and see the world" speech is hilariously Ben Stein-level deadpan. That tends to be the case across the board, and the more Oceanhorn tries and fails to raise ay emotion whatsoever, the more embarrassing it becomes.

The journey's ease is sometimes appreciated, but it defines the entire experience. The only ace in Oceanhorn's pocket is that it's a type of game that typically doesn't see much play outside Nintendo's platforms, and it does stand out in that way. It's still a fundamentally unimaginative example of the genre it's aping, and completely fades out of memory the second you remember there are other fish in the sea.

View Comments (40)
Back To Top
5
Mediocre
About GameSpot Reviews 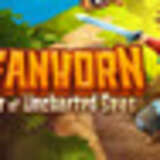 Justin Clark spent five hours cruising the sea for the dread monster Oceanhorn. He’s made a sworn vow that, given enough money, he would pay to have Nobuo Uematsu score his life for a week. It’s good to have goals. GameSpot was provided with a complimentary download code for the purpose of this review.