From beginning to end, Obsidian is an entertaining, surreal romp.

Okay, my confession is not uncommon for most PC owners, but I'll admit that I was addicted to Myst - but only for about a day. It was after this exhausting 12-hour session that Myst's seductive, painterly landscapes, intriguing puzzles, and general - dare I say - Mystique began to wear on me, and I had to go on with my regular life…of playing more games. Despite the visual gymnastics that Myst performed, I had to stop because I felt trapped: Here I was, caged in terminal stasis, stuck in what was simply a slide-show of beautiful pictures.

Rocket Science's Myst-like title, Obsidian, presents a pleasant departure from the lonely inertia of Myst's gameplay. Obsidian is at least as breathtakingly beautiful as Myst, if not more so. Die-hard Myst fans and those unfamiliar with the mega-hit title alike will be pleased. Obsidian simply offers more movement, more character interaction, more interesting puzzles, and - another crucial difference - many puzzles that actually require eye-hand coordination.

In Obsidian, you're cast as Lilah Kerlin, a scientific engineer who, with your associate (and significant other?) Max Powers, has launched Ceres, an Earth-orbiting satellite that uses patented "nanotechnology" to help rescue the increasingly moribund atmosphere surrounding Earth 2066 AD. The two go on a hiking trip, only to discover a mysterious chunk of black, shiny rock, which grows several feet daily. By the time you enter the game, this rock - dubbed Obsidian by the unsuspecting campers - has formed an enormous tower. After a little investigation, you find that Max has been sucked into the tower, and as you approach the nefarious mass, you too are abducted, becoming a prisoner of Obsidian.

Once inside Obsidian, you have to find your way out of the topsy-turvy, Escheresque Bureau room, an episode in one of Lilah's nightmares that has somehow been transformed into a concrete environment by the uncontrollable Ceres. Later, you encounter a huge industrialized room inhabited by a dormant mechanized spider which has similarly materialized from one of Max's dreams. The environments in Obsidian defy conceptual physics; expect your adventures to include walking on walls and ceilings, rapping with weird TV-headed droids, and entering portals into serene deserted beaches and creepy, futuristic junkyards.

From beginning to end, Obsidian is an entertaining, surreal romp. Playing the game, it's obvious that a hell of a lot of work went into detailing the animation and scenery. I was waiting for the game to run out of ideas, but in the end, Obsidian is a seemingly infinite procession of bizarre chambers, each with increasingly challenging puzzles (the title boasts some 60 hours of playtime). If anything, Obsidian piqued my interest in games of Myst ilk. And that's saying something for me, a gamer whose main gaming interests include bombing Russian compounds and unloading a carpenter's-memory worth of nails into an unfortunate multiplayer opponent. 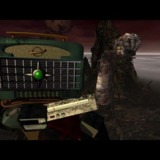