It's full of stars.

In Observation you play as SAM (Systems Administration and Maintenance), the AI assistant of a space station that represents the joint efforts of Europe, China, and Russia. Your abilities are limited by your absence of a corporeal form--for most of the game you're controlling the cameras dotted around the station and interacting with any computers or digital panels within their range of vision. You have access to a station map that expands over time, and you're able to jump between cameras across the entire ship at will. It might sound like a limiting conceit, but Observation uses your unique position of omniscient claustrophobia to craft a compelling, creepy, and extremely original narrative experience.

The year is 2026, and you're on the station with Emma Fisher, a European crew member who awakens at the game's beginning to find that she has no contact with the rest of her crew on board. It's immediately clear that something catastrophic has happened; the station is no longer in Earth's orbit, and no-one is answering her attempts at communication. To say much more would be to spoil elements of a plot that are best left to surprise you--the first major twist happens within about 20 minutes. Suffice it to say that Observation's narrative unfurls slowly across the entire length of the game, with its mysteries growing all the more complicated and your sense of dread deepening as the game goes on.

Observation absolutely nails its distinct lo-fi, sci-fi aesthetic. The cameras crackle and jump as you shift between them, and the stylistic film grain and distortion over every visual emphasizes your slight removal from the reality of the situation Emma is facing. Like many science fiction works of the last forty years, Observation is indebted to Ridley Scott's Alien--some of the tech aboard the space station feel like antiquated products of a decade long past. This aesthetic, paired with the game's too-near future setting, gives Observation the pleasant feeling of an uncovered classic or remake of an ambitious, older piece of work. SAM is far and away the most advanced piece of technology on the station, and even when you load up your own system menu (which lets you view the map, check system alerts, and perform other functions that unlock during the game) you're treated to some pleasantly analog and retro buzzing and whirring sound effects.

You experience most of the game through the slow panning and zooming cameras, an effective tool at creating a creeping sense of tension, although the occasional cutscene is used to better capture action at a crucial moment. It's not about jump scares or personally being in danger; again, to say too much more would be to spoil the game's clever pacing, but it's a game that's incredibly effective at building dread more than overt terror.

The actual gameplay is, for the most part, pretty simple. You need to explore the ship as much as you can from your various vantage points, scanning every document and inspecting every laptop you encounter, opening and shutting hatch doors, and interacting with the station's equipment. The bulk of the puzzles boil down to figuring out how to operate SAM's interface, finding schematics to help you operate certain programs, and learning the necessary procedures for the instructions you are given.

The game does an excellent job of taking complex ideas and procedures and presenting them as simple operations. Everything from opening the airlock to securing the doors between sections of the station boils down to a few button presses; occasionally you'll have to take part in what is essentially a timed mini-game, but for the most part, you're just following basic instructions. The main challenge comes from figuring out how the different parts of the ship all work together, and reasoning through the impact of your actions and what information you do and don't currently have access to.

At certain points, you'll need to control a spherical droid that can float around the station--and, more excitingly, outside the station--freely. It's a bit of a pain to control in tight spots, and it's easy to lose your bearings because the concepts of up and down are relative in zero-gravity environments. But there's a real thrill in breaking free from the static cameras and floating through the station, and in getting used to the sphere's limitations. Observation doles these sections out expertly, using the droid when it needs to make you feel more a part of what is happening. It plays on the droid's symbolic sense of place extremely well; it's the physical element of SAM that sells Emma's growing friendship with him.

Often what you need to do next, and how to do it, will be spelled out extremely clearly, though the game's instructions could stand to be a tad clearer in a few sections. One time it seemed like I had hit a particularly abstract puzzle, but it turned out that I'd actually encountered a glitch where a certain event didn't trigger properly, which necessitated a quick checkpoint reset. This was a pain, as the game's checkpointing can be a bit strict--you keep any information you've collected through scanning objects, but it doesn't save after major actions, so it's hard to know exactly what you'll have to redo when you exit out. But it's not too big an issue, as I never lost more than a few minutes of progress.

Slowly discovering every system on board, inspecting every room, and unlocking more menus and commands within SAM's UI is an absolute treat. Observation is a visual stunner, with only the odd lip-sync issue occasionally distracting from the level of polish and craft on display. Later events ramp up the inherent creepy isolation of a space station perfectly, too. The story is compelling and exciting right up until the credits roll, and the game doesn't let up on revelations, twists, or the increasing tension of knowing that the game is building towards something wild. Observation also achieves the extremely rare feat of containing audio logs that are both compelling and make sense within its world.

Observation is a wonderful example of how to do focused, self-contained science-fiction storytelling in a game. It's well-written and clever, and nails the sci-fi tropes and aesthetics it both plays to and builds upon. It's a game that demands to be analyzed and thought about further once you're done with it, and while the internal world of the game is small, inhabiting it is a real pleasure. 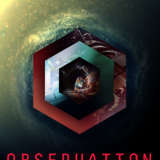 James O'Connor spent about seven hours with Observation on PS4. He liked and reviewed No Code's Stories Untold for GameSpot two years ago but thinks that this is even better. Review code was provided by the publisher.