Nuclear Dawn is an intense first-person shooter/real-time strategy hybrid that has a lot to offer when it comes to teamwork.

Nuclear Dawn is finally here, and it's good. That comes as welcome news to shooter fans who have been waiting for the game to emerge in a final, commercial form since it initially arrived way back in 2006 as a Source mod. Those with patience have now been rewarded with an innovative and exciting hybrid game that welds real-time strategy and first-person shooting together into a (mostly) cohesive whole. There are some rough spots when it comes to presentation, and the lack of interactive tutorials and single-player modes make it hard to get into. But seen at its best with experienced players willing to work together (and follow orders), the game is an impressive, intense multiplayer shooter with tactical depth.

At its heart, Nuclear Dawn is a fairly traditional multiplayer-only shooter based on a generic story of a postapocalyptic war between two factions called the Consortium and the Empire that roughly resemble Yanks and Commies. (In case the comparison isn't totally obvious, the Consortium is the blue team and the Empire is the red team). It is the late 21st century, and the world has been pretty much wrecked, presumably by the nukes of the game's title, but the two factions are still battling over the irradiated rubble. The lone mode of play currently available (the developers have promised more) is a Warfare option in which teams composed of up to 16 players per side fight for control of resource points that give commanders the energy needed to construct buildings as in a usual RTS game. Victory is earned by fighting through the enemy lines and obliterating the bad guy's bunker.

The basic design is smooth and professional. The four available classes have been well thought out, with each having particular skills and vulnerabilities that slot nicely into a rock-paper-scissors formula. You have the heavy-gunning and armored but sort of slow exo vulnerable to the quick and cloaked stealth operatives; assault troopers with visors that spot those sneaky cloaked guys; and support soldiers who heal and repair. Kits within classes let you further specialize. So support can choose to be medics, engineers, or even flamethrowers; assault can trick out an infantry SMG, a sniper rifle, or a grenade launcher/shotgun combo; exo can pick between the standard chaingun and siege rocket launchers geared to take down enemy buildings; and stealth can trade off arm knives for sniper rifles. Most of these additional weapons become available over the course of play as long as your commander is doing his job in the bunker and researching them.

There are no overpowered weapons and no killer classes to unbalance the game, yet you'll undoubtedly get a bit frustrated at times by cloaked stealth troops insta-killing you with arm knives, and enemy grenades that arrive without any warning or audible sound effect. The moat glaring exploit is with EMP grenades used by engineers. These nifty little devices totally shut down buildings for lengthy periods of time. Use them effectively, and you can pretty much close off spawn points and mess with a team by preventing its troops from spawning back into matches. You can battle this tactic by building spread-out spawn locations, although this presupposes that most of your team is aware of the EMP tactic at the very start of the match and is prepared to counter it. Otherwise, you can be taken completely off-balance, and your match can be ruined by just one or two engineers sneaking through the lines and getting into your main base. Fail to tackle these sneaks right away, and you're almost guaranteed to lose. EMP grenades are also problematic when it comes to new players who don't know anything about this strategy, because you can enter a game and find yourself unable to spawn for a minute or more.

Map terrain is an atmospheric mash-up of six postapocalyptic locales, such as blasted London and New York cityscapes, an Asian subway system, a snowy military base, and an anonymous Arab city now ruined and left to the sands. All the maps are designed more for quick, smart play than for looks. They are also just the right size to promote intense fighting while leaving enough room through plentiful streets and corridors to make you think about what you're doing. Much of the design is centered around maintaining good flow during combat and allowing for choke points that can be taken advantage of by smart commanders who know how to effectively deploy gun turrets. As a result, there are very few good camping locales. You can camp if you want to, of course, especially with a sniper rifle in high areas on maps like the New York map. But there are so many ways to access every spot on the maps that you tend to find yourself tracked and killed in short order. Victory always runs through the primary resource point that sits near the center of maps and attracts troops to serious firefights early in most matches. Control the center of the map, and you stand a very good chance of winning the game.

What sets Nuclear Dawn apart is its RTS element. Every map sees one player serving as a commander who oversees battles from a bunker. The commander has the ability to play the game much like a traditional real-time strategy game by dishing out attack and defend orders and constructing buildings like spawn points, gun turrets, supply stations, armories, and so forth. As noted earlier, commanders also order up research, so your side gradually gains access to new structures and new weapons that can be custom-fitted to troops on the fly in armories.

Of course, this is where matches succeed or fail. Get a good commander who knows the map, knows how to place buildings and turrets, knows how and when to order research, and issues smart orders to troops, and you can have a blast. Games flow spectacularly well with a good commander, as long as you have teammates who know the importance of teamwork and listen carefully to what the boss tells them. You feel like part of a real military team, being given specific intel about where the bad guys are forming up or when you have a chance to set up a spawn point close to the enemy command base and blitz him for a sudden, surprise win. Conversely, if you don't have a good commander, or are stuck with a bunch of rookie players who aren't sure what they should be doing, matches can blow up into chaotic messes. It can be very bad if you're in a match with a good commander and a bad one, because the rout is on almost as soon as you spawn in (this is often where you see the EMP exploit at its ugliest). Ineffective commanders can be dumped via mutinies, although matches are usually well out of control by the time enough players get together to vote out the boss.

Another problem is that there is no solo way to play to learn the game. Nor are there any interactive tutorials. The only primer you get before being tossed into the deep end of an online game is a handful of dull videos that outline some basics. This isn't nearly enough assistance to help you get into a game that is so reliant on teamwork, where how you play is key to how much enjoyment you get out of everything. So first impressions aren't favorable, and the initial learning curve is quite steep. As a result, the servers aren't packed with matches at the moment. You can always find one or two games in progress with enough players to have a good match, but generally that's about it.

More so than many games, Nuclear Dawn is what you make of it. Go into a match with a smart, hands-on commander and experienced players who are willing to take orders, and you will be rewarded with a white-knuckle tactical struggle. Go into a match with players who don't know what they're doing, and you're guaranteed to get into a sloppy brawl. Still, the great enjoyment that can be had in the former matches makes it worth your time and energy to struggle through the latter. 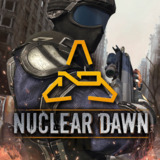