Dalmatian and Friends is still a charming, endearing game, though it's also essentially the same game that was released in previous versions.

Just when you thought the storm of unbearably cute puppies had fully passed, Nintendogs comes romping back to the fore in Dalmatian and Friends. This is the same game that was released last year, only this time around you'll have the option to start out with what was in previous versions an unlockable breed only: the Dalmatian. If you haven't yet experienced Nintendo's portable puppy phenomenon, this is as fine an introduction as any, and you'll still end up with a great virtual companion at your beck and call.

When you start the game, you'll immediately be whisked to the Nintendog Kennel to choose a companion from among six different breeds of scampering cuteness. The available starter breeds in this particular version are the Dalmatian, Yorkshire Terrier, Beagle, Golden Retriever, Boxer, and German Shepherd Dog, and you're still able to eventually unlock all breeds on one game. Each individual dog has its own personality, from shy to daring, from willing students to determined truants. Every time you bring up a particular breed listing, the puppies you can choose from will shuffle to a random selection of colors and personalities, so you can hand-pick the type of pooch you want. Pay the adoption fee, and then it's home with you to bond with your new cold-nosed friend.

The bonding comes easily with Nintendogs, due in large part to the high levels of care and detail that went into creating these digital canines. It's not just that the puppies have been given the accurate appearance of their given breeds--though the representation is quite authentic, down to the different coat and color patterns. It's that a great host of doggy mannerisms have all been captured just about perfectly. Every enthusiastic gallop after a tennis ball is just right, the way their eyes close in satisfaction and their tail blurs into motion when they're patted, the way they sometimes flop over each other for a sudden nap, and each tongue-lolling, panting stare filled with happy adulation is pure puppy. So it's easy for you to become rapidly attached to your new virtual pals, and it's hard for you to resist the occasional sad-eyed face and plaintive whine of a Nintendog begging for attention.

Once you get your dog home, you'll be able to name it using the game's voice-recognition software, repeating it a few times until your pooch "learns" his or her name. After an initial adjustment period in which you'll shower your new puppy with attention, you can begin training it. As a puppy performs an action it can learn as a trick, a lightbulb icon appears in the corner of the screen. Quickly tapping this icon lets you record a command to associate with that action--for example, linking the word "sit" to when the dog sits down. Then it's a matter of associating that same word with the same action multiple times, until your puppy learns the trick. A successful training session results in another lightbulb above Rover's head and a happy yip; if your dog is confused, red question marks appear over his head to let you know you need to speak a bit more clearly next time. Blue question marks appear if you're trying to teach a command that sounds like something the puppy already knows, so you don't risk overlapping your tricks.

Once you've taught your puppy a number of commands (the amount of time this takes depends on whether or not you picked one of those daring, headstrong dogs, which seemed like a good idea when you bought it) and raised your trainer level a bit, you can begin preparing your dog for the various contests you can compete in. There are three different types: obedience, which rates your dog on how well it follows verbal commands; disc, which lets you show off your dog's Frisbee-catching prowess; and agility, which is a hectic romp through an obstacle course. How well your puppy does depends on how much you've been practicing a given activity and how strong your bond is. Placing in the top three earns you a sparkling trophy, prize money, and a boost to the next level of competition. If you lose, you're knocked down a level, so you'll have to move your way back to the top.

It's not all about trophies, though--a lot of the most rewarding interaction between you and your puppy happens in the course of your many more-mundane activities. You'll interact with your puppy a lot with your stylus, using it to pat the dog and position it for tricks, as well as to throw toys for pooch to play with. Your puppy will alert you any time you tap the stylus on the touch screen and come to you if you continue to tap, though you can also call your puppy's name and get it to trot right over. The dogs are eager to interact with you and will either follow the stylus with their eyes, jump to maneuver their heads underneath it, or lick your presented hand happily. If you toss them toys, they'll also routinely bring them back to you, sitting their front paws on the touch screen and waiting patiently for you to play.

Taking your dog on walks around town is a good way to stretch their legs and work those paws, and your puppy will also discover various accessories lying around (from collars, to toys, to Mario hats, to strange items for your house), play with other neighborhood dogs, and try its darndest to get that burrito out of the trash. As you continue to go on walks, your dog's stamina will improve to the point where you can roam all over town, visiting parks and gymnasiums that let you practice disc-tossing and the agility course, as well as discount shops that sell all-new items for you and your pampered pooch. Besides walks, necessary maintenance includes feeding and watering your dog when it's hungry or thirsty and bathing your dog when it gets dirty. An interface you can access from the menu lets you see your dog's vital information at a glance, in case your prized pooch is in need of a flea-ridding scrub. Pups can go for some time without a certain level of care, but if you completely neglect them, they'll eventually run away--as well they should, from such a heartless master!

The more you play the game, the more items become available for you to purchase, like different foods and toys. Passing certain levels of achievement will, as mentioned previously, unlock even more dog breeds for you to choose from. You can have up to three puppies in your house at any given time that will romp around with each other, and a nearby "dog hotel" can help house anyone you might not be able to care for.

The game does have a few limiting factors, however, as the puppies can't run all day indefinitely. You're restricted to entering three contests a day; you can only take your dog out for a walk every 30 minutes or so; and your dog can only learn so many tricks in one day before its canine brain calls it quits. This isn't something you'll run into unless you try to engage in a marathon of activities, and when you encounter it, it can be a bit off-putting, especially if you've only got one Nintendog to lavish all your considerable affections on. For that reason, this is a game that's really at its best when played in multiple bursts throughout the day or one action-packed extended session a day, as opposed to repeated long sessions. There's still plenty of content to unlock and lots of puppy playing to do, so the restrictions aren't all that onerous, but there will be occasional times when Fido just can't keep up, and you'll need to put the system down and do something else for a while. At least your puppy is always happy to see you.

You can also interact with other Nintendog owners wirelessly, through something called bark mode. Setting bark mode puts your Nintendo DS on the alert for other Nintendog games with the mode activated. When in range, bark mode signals you to the presence of another puppy, and then both puppies can play together on the same screen. You can choose to bring one of your items as a present for your new friends, and you'll automatically exchange trainer information and add the other user to an in-game friends list. It's a nice way to hook up with your friends' puppies, or perhaps even see what dogs might be lurking in a crowded store or street. The one curious thing about the mode is that the two DS systems don't sync--your playing puppies' activities are local to your own handheld. However, considering the presence of two human masters able to call and command both puppies with impunity, it's easy to see why it was designed that way--to prevent unintentional games of pup ping-pong.

The game's visual strength is mainly in the dogs themselves, with their lifelike expressions, mannerisms, and motion. The rest of the game consists of a variety of simple backdrops--your sparsely furnished home, the streets of town, the venues for the different contests--that serve to quietly be a place where the puppies can romp without distracting from the game. The game's gentle, upbeat tunes are a nice complement to the assortment of yips, barks, fearful whines, plaintive begging, playful huffing, squeaking yawns, and other such doggy noises that round out the great sound.

Nintendogs is still a great game more than a year after its initial release, though it's also precisely the same game as before. There are no new dog breeds (the Dalmatian could be unlocked in the original version if you found the fireman's hat item), no new play modes, and much the same selection of earned and purchased extra content. If you already own Nintendogs you can safely give this a pass, but for new would-be puppy owners, Dalmatian and Friends can be an appealing, enjoyable experience. 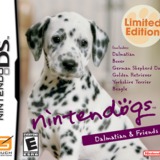 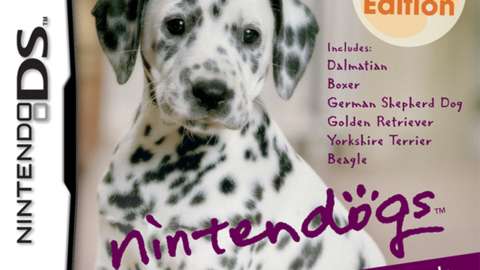 With Nintendogs, you can put a puppy inside your Nintendo DS. Pick from multiple breeds, ranging from Labradors to Chihuahuas, and then take care of and train the puppy using the touch screen and microphone.