Ninjatown is an intuitive strategy experience that anyone can enjoy.

While depicting ninja as anything other than silent, throat-cutting assassins generally means a game is headed in the wrong direction, SouthPeak Games' DS adaptation of the Shawnimals line of toys proves that preconception false. With an intuitive interface and some addictive strategic battles, Ninjatown is one of the better licensed games released this year.

The story revolves around the attempted invasion of Ninjatown by the nefarious Mr. Demon and his gang of Wee Devils. As the powerful Ol' Master Ninja, you are in charge of defending Ninjatown's most precious secret, the recipe for your world-famous ninja cookies. The story, as one would expect, is there merely to set up the actual game and serves to relay key objectives such as protecting a bridge, factory, or other key locations. The dialogue is hammy and unintentionally funny, but can easily be skipped or watched without having an impact on your overall experience.

Ninjatown is a straightforward endeavor. Your objective in every map is to protect a location from being invaded or destroyed by Wee Devils. To do so, you have to construct buildings that house various types of ninja with different attributes that help you fight off the waves of enemies. There are both melee and long-range ninja including black ninja, which are well balanced in speed and strength; business ninja, which are fast but not particularly strong; sniper ninja, which are balanced long-range units; and white ninja, which can shoot snowballs at enemies and momentarily freeze them.

The game features even more ninja classes, some of which are available from the beginning and others that are unlocked over time. All of your buildings can be upgraded during battle to raise the maximum health, strength, and other attributes of your ninja, and you can even set up "modifier buildings" that improve the strength, speed, or attack range of neighboring ninja buildings.

You'll start each battle with an adequate enough number of ninja cookies--Ninjatown's currency--so that you can get at least a few buildings set up. The ninja do all the work once the buildings have been constructed, and you earn more ninja cookies that can be used to build new buildings or upgrade existing ones for a more powerful overall defense. The system works incredibly well; each map usually features around 10 waves of enemies, and the later waves often include not only more enemies, but varying types. There are business Wee Devils that are fast and tough to halt unless you have an equally fast defense; large, blob-shaped enemies that are slow but extremely powerful; flying enemies; and even zombies.

The top screen serves as an overview map and keeps track of how many ninja cookies you have as well as the types of enemies coming your way. If things get a little too heated and you find yourself overpowered, you can call for Ol' Master Ninja's powers or use tokens that are available in combat. The types of Ol' Master Ninja powers are quite varied, including options to empower your units but also fun toys such as the magnifying glass that will fry foes with scorching sunlight. The tokens are often quite handy, including the ninja droppings option that radiates a stench that chips away at the health of all enemies in its radius.

What's most impressive about Ninjatown is the level of challenge and strategy involved in such a simplistic game. Setting up ninja buildings and managing them is intuitive enough, but your invaders will make quick work of your defenses if you place the wrong kinds of units in the wrong places. As you progress through the 36 maps spread across the nine districts of Ninjatown, there will be many battles you will have to replay multiple times before finding the right strategy. Unfortunately, this magnifies perhaps the biggest flaw with the game: the inability to quickly correct your units on the fly. You can sell buildings and erect new ones in their place, but oftentimes the battles are too frenetic and fast paced for your adjustments to make any significant difference, meaning you'll most likely lose and be forced to restart.

Ninjatown also comes packed with a multiplayer mode in which you and a friend both play a single map; the player that eliminates the incoming waves faster is the winner. It's quite competitive and puts a lot of emphasis on your unit selection and placement. The nice thing is that you need only one cartridge to play three of the game's nine districts with a friend, but all nine are available if both players have their own copies.

Upon first loading, Ninjatown's art style is immediately noticeable. Its vibrant colors accentuate the lighthearted nature of the game and the characters are all distinguishable from one another. The business ninja and Wee Devils are meant to be the humorous characters, strutting around with their ties. There are points in the game where you may laugh because you realize that you're watching ninja wear ties, and the ridiculousness of it all smacks you in the face. The music, on the other hand, is there mostly out of necessity and isn't particularly memorable.

Ninjatown is a delightful and surprising entry for the DS. With each battle only lasting upward of 10 or so minutes, its not only perfect for your portable gaming needs but makes good use of every minute you play. It's an exhilarating and well-balanced strategy game that is simple enough for newcomers to the genre, while at the same time challenging enough to keep things interesting. If you've been around the block with strategy games you may not find much here, but if you're looking for a pick-up-and-play experience Ninjatown is wholly recommendable. 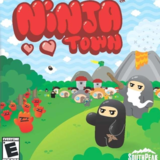