Extreme difficulty be damned, Ninja Gaiden is still an excellent side-scrolling adventure that stands the test of time.

If, up to this point in time, your only knowledge of the Ninja Gaiden franchise comes from the recent entries on the Xbox, now's your chance to explore the series' roots. For 500 Wii points ($5), you can now download the NES version of Ninja Gaiden, arguably one of the best side-scrollers released during its time. Granted, with that statement comes one notable qualifier: This game will beat you to a pulp. Ninja Gaiden is like the abusive spouse of the NES era. It assaults you time and time again with its punishing difficulty, insidiously placed enemies, and rage-inducing boss fights, and yet you'll keep running back for more. You'll look at its awesome cutscenes and experience its excellent jumping controls and fighting mechanics, and all the pain and suffering you've endured will just start to wash away.

Ninja Gaiden tells the revenge tale of Ryu Hayabusa, ninja extraordinaire. Opening with one of the most fantastic cinematics in gaming history, two ninjas stand in an open field, bathed in the pale moonlight. They furiously run toward each other, leaping into the air, drawing swords in a flash. When they both land, one falls to his death. This was Ken Hayabusa, Ryu's father. Ryu initially sets out to find out what his father was doing and who he was dueling with, but finds himself wrapped up in a delightfully cheesy tale of ancient demons trapped in statues, CIA operatives, and, of course, ninjas. Unlike most NES-era games, the story here actually has something to it. Cutscenes bookend each of the game's six chapters, and these sequences were revolutionary for their time. Sure, they're basically still-frame shots with a couple of frames of scattered animation and scrolling text (with a few translation issues), but at the time, no games did anything like this. And even if they are old and crusty at this point, they're still cool looking. In-game graphics still look decent too, if overly blocky in spots, and the soundtrack ranks with the best music on the NES.

Ninja Gaiden is basically an action platformer. You jump and stab your way around a series of levels, navigating a variety of weird enemies (ninjas, axe murderers, boxers, demon clerics, zombie karate men, football players, and the like), bottomless pits, and walls that can be clung to and leapt off of in one of the early examples of wall jumping in a video game. Along the way, you'll pick up some added ninja abilities and magic, like spinning jump attacks, throwing stars, and fire bursts. You'll also want to snap your controller in half as the game kills you again and again and again.

The thing that really makes Ninja Gaiden so devious is that it doesn't start out all that tough. The first level is pretty breezy and the first couple of boss fights aren't tough to figure out, but about halfway through the second level, you start to realize that it's about to get real. You find yourself running into lots of enemies that are placed in just such a way that you have to basically memorize their movements and spawn areas to beat it. Too often will you find yourself running quickly through a level, only to take a jump and have an evil eagle or a guy throwing axes spawn right in your path. By the time you get to the sixth and last level, the game starts to resemble one of the bottom levels of gaming hell. Though the game is only six levels long and, in real time, is probably only a little over an hour long, you will not beat this game in an hour. Or two hours, or maybe even three. You'll be practicing for quite a while to get through this puppy.

However, the key difference between this masochistically tough game and other masochistically tough games from this time period is that Ninja Gaiden doesn't use its difficulty level as a crutch. The underlying gameplay in Ninja Gaiden is good enough to keep you playing, no matter how many times it punches you in the face with some cheap enemy placement or completely insane boss fight. For those who like their classic games angry and challenging, Ninja Gaiden is one of the better examples of that style of game, because it's hard and it's fun. And ninjas are awesome. 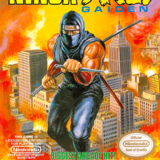