This handheld offshoot of the revered action series provides plenty of fun and satisfying stylus slashing.

If you're in the market for an action game that wrings the most out of the Nintendo DS's visual and sonic capabilities, you need look no further than Ninja Gaiden Dragon Sword. It is possibly the most technically proficient title available for the system, brimming with superb, smooth-as-silk visuals and sword-slashing sound effects that make the action practically spring off the screen. It's impossible to imagine how Dragon Sword could have better captured the overall look, feel, and flow of the console games, from protagonist Ryu Hyabusa's midair acrobatics to the dramatic Eastern-hued soundtrack. And while it may have its problems, the gameplay does a pretty good job of keeping up, matching most of this brilliance with a compelling adventure and stirring, combo-stringing stunts that are thick with thrills and kills.

To play, you'll first need to flip the DS sideways. Every bit of the action takes place on the touch screen, with the top screen relegated to cutscenes and the minimap. The touch screen also holds the key to your controls: Every move you make as Ryu, from running and jumping to slicing and dicing, is done with the stylus. The only time you need to touch a button is to block, which can be done with any button--even the D pad. It's a pretty comfortable setup, and we found that keeping our thumb on the D pad for this purpose worked out just fine (if you're a southpaw, you would use a face button in a similar manner), though using one of the shoulder buttons is also a viable solution.

Even if you're a series aficionado used to doing your dirty work with a standard controller, it won't take you long to get used to the controls. Using the stylus is remarkably intuitive, since your flicks with the stylus are met with a more or less equivalent action on the screen. If you want to run, just slide the stylus in the direction you want to move. If you want to jump, flick it upward; to attack, swipe through the enemy you wish to target. It's simple, and it may not afford you the kind of complex combinations and wall-jumping gymnastics you can perform on the Xbox and PlayStation 3 titles, but there's still a remarkable array of interesting techniques to pull off. For example, you can double-jump toward the heavens by flicking upward twice, and then slash through a nearby fiend, which will cause Ryu to zoom toward his enemy and slice into it. Scratching rapidly will unleash a powerful attack that varies based on how long you scribble, while tapping an enemy will cause you to throw a shuriken or shoot your bow. It's all pretty effortless.

Rest assured, the stylus controls aren't just the touch-screen equivalent of random button mashing. You need to maintain control over the attacks you want to perform, especially in the later stages, since some enemies are far more susceptible to some assaults than others, while a poorly chosen move on your part can leave you vulnerable. Nevertheless, compared with other games in the series, Dragon Sword is relatively easy, and is made even easier with its plethora of save points--and the fact that those same save points completely replenish your health and ninpo magic energy. The diminished challenge is most obvious in the game's boss fights. The bosses themselves are intimidating and exciting to look at, but most of them are a cinch to take down. If you're a Ninja Gaiden fan, it's a bit disappointing to realize that on standard difficulty level, you'll be able to take the majority down in one try. Even some of the attack patterns are practically the same among bosses, which is disappointing.

That doesn't mean, however, that Dragon Sword isn't a lot of fun, regardless of how you feel about its level of challenge. This is mostly due to a varied pace, a terrific sense of speed, and--when things are at their best--responsive controls. You won't just be swiping your stylus around constantly, and when you do, it's not always just to fight a roomful of mean-looking ogres. You'll head back to town between missions to consort with the townsfolk and purchase upgrades, navigate the occasional trap sequence, and solve a few rudimentary puzzles. The action is the most satisfying aspect, though, since the controls engage you with onscreen events in the most immediate way possible. It's tremendously rewarding to flick your stylus around and watch Ryu let loose with a smooth, snappy selection of stabs and strikes. Less frequently, the game won't respond properly to your carefully scribbled strokes. This occurs mainly when the level design causes the action to retreat toward the rear of the arena, where Ryu and his enemies become the size of ants. When this happens, the corresponding mess of pixels makes it harder to perform the attacks you want to perform, and even jumping gets a little haphazard.

Dragon Sword has retained the ninpo magic aspect of the franchise, though the mechanics are a lot different this time. Provided your ninpo gauge is full, you tap an icon on the screen to activate an attack. From here, you select the ninpo you wish to cast, and in turn, you are met with a Sanskrit character that you color in using the stylus. Once it's filled in, you're returned to the main action, where you can further control the attack. These are mostly what you would expect--lightning strikes, fireballs, shards of ice, and so on. The system itself is a nifty way of further using the touch screen, and while it temporarily removes you from the action, it complements it rather than detracts from it.

There's a story buried in here. The plot has never been the main point of a Ninja Gaiden game, but Dragon Sword provides a decent catalyst for the ensuing mayhem and introduces a new character, Momiji. The bulk of the story plays out in beautiful, vibrant cutscenes accompanied by gripping music, and features a few touching references to fallen heroine Kureha. The cutscenes aren't the game's only displays of splendor, however. As previously mentioned, Dragon Sword is a technical powerhouse, squeezing the most out of the DS without a single hitch and perfectly re-creating the visual style of the console titles. Ryu flips and zooms around with animations so fluid it's a wonder the machine can render them without even a hint of slowdown. Human enemies (of which there are few) and fiends (of which there are many) are meticulously designed, and they look great and animate smoothly as well. On top of that, an array of guttural grunts, sword clanks, and ambient sounds help bring the action to life.

The game clocks in at eight hours or so, but once you're done, there are some unlockable goodies to check out, and you can upload your karma score (accumulated by busting out your most skillful moves) via Wi-Fi to compare with others. Besides, the core gameplay is so good, you'll want to return to it, possibly to check out the higher difficulty levels, which are a bit more compelling. All in all, it may be watered down a bit, but Ninja Gaiden Dragon Sword is still a spicy and savory mix of familiar combat and sweet stylus action, and it pulls you into its world of dastardly fiends and mysterious, shuriken-slinging martial artists. 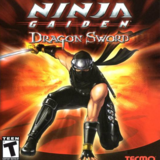 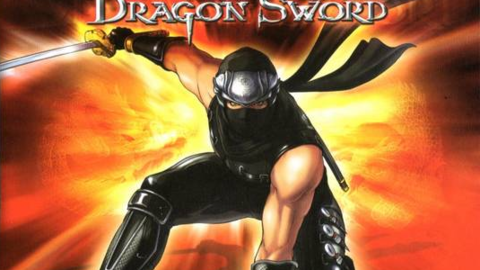