Its graphics are lacking, the level of challenge isn't up to snuff, and the whole experience is over way too quickly.

Sometime in the early '90s, there was a shift in perception as to what it meant to be a ninja. These days ninjas operate with stealth and usually without honor, slitting throats, stabbing backs, and using any kind of poison they can. Yet those who came of age in the 1980s know that ninjas attack head-on, in incredible numbers, and without any aversions to light or, apparently, death. The latest PS2 light-gun game from Namco, Ninja Assault, delivers on the throwback headstrong-ninja motif, but its graphics are lacking, the level of challenge isn't up to snuff, and the whole experience is over way too quickly.

Ninja Assault draws from the same well as Capcom's Onimusha in terms of both style and story. In fact, the story is almost litigiously similar to that found in Capcom's samurai action game. An evil warlord has kidnapped a beautiful princess, and it's up to a ragtag band of ninjas to blast a swath through the hordes of demonic warriors that serve the warlord. If you've already gotten this far without seriously questioning why these ninjas are packing pistols instead of swords or shurikens, then it probably won't bother you while you're actually playing the game.

Light-gun veterans will probably be familiar with the gameplay in Ninja Assault even before they pick up their GunCon 2, as the game offers only a few slight modifications to the standard light-gun formula, such as a ninjitsu move that can, at the press of a button, clear out any incoming projectiles and deal damage to all enemies onscreen. Traveling on a set path from one end of the level to the other, you'll pause to blast away anything that moves, including demonic samurai, demonic archers, demonic ninjas, and some regular old demonic demons. The end of each level usually culminates in some kind of boss battle, though the bosses in Ninja Assault rarely put up a very challenging fight. However, the general speed of the game may up the ante for some players. Ninja Assault is fast, considerably faster than just about any other light-gun game out there, and the first-person view moves along with the sort of nimble agility you'd expect from a ninja.

This speed also helps the main story mode fly by. Though it may take you one or two attempts to finish it before running out of continues, the whole thing clocks in at a little under an hour. The game tries to stretch out the playtime by including three different versions of the story, each one giving you control over a different ninja, but the only real reason to play through the story mode multiple times is to unlock more minigames in the mission mode. The game's 32 contextual minigames set you up with a series of different scenarios, many of which boil down to killing a number of enemies or collecting a number of items before time runs out. Though they can get a tad repetitive, the minigames present some of the greatest challenge in Ninja Assault and should test the mettle of the most hardened light-gun gamer, much like Namco's Point Blank series does. It's also worth noting that Ninja Assault has no support for Namco's original GunCon peripheral, though the game can most easily be picked up with the GunCon 2 packed in.

Ninja Assault was originally released as an arcade game in 2000, and its age is apparent by the game's rough graphical presentation. The textures are evenly low-res and blocky, and the game's general geometry is fairly simplistic. Character animations are pretty utilitarian, imbuing your enemies with just enough personality. Though, to its credit, even with its general level of technical deficiency, Ninja Assault still capably conveys the feel of a dark, feudal Japan, and the camera's agility really does a good job of putting you in the ninja's shoes.

The music in Ninja Assault is largely drowned out by the death knells of your enemies and your own gunfire, but what's there is quite fitting for the game's over-the-top take on the era, fusing classical Japanese sounds with hard and fast techno music. The voice acting, while sparse, is predictably bad, with lots of flat reads and inappropriate inflections, though cutscenes come up so sporadically and infrequently that the voice acting never achieves a level of high camp.

With just about every other PlayStation 2 light-gun game out of print, the PS2 light-gun enthusiast is left with few options. The last two PlayStation 2 light-gun games from Namco, Time Crisis II and Vampire Night, are both better than Ninja Assault in terms of presentation, length, gameplay, and level of challenge. The ninja motif does help separate Ninja Assault from the rest of the pack, but the gameplay is so derivative and the story mode so short that most players will probably completely exhaust anything that Ninja Assault might have going for it in a single rental. 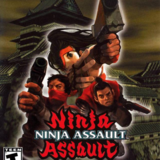 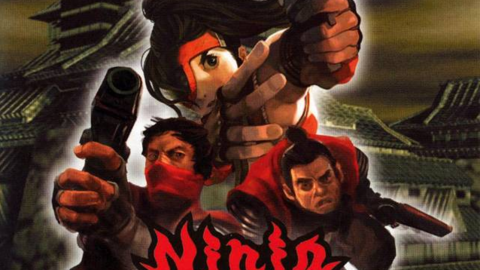 Its graphics are lacking, the level of challenge isn't up to snuff, and the whole experience is over way too quickly.