You wake up on an ocean liner. You have been chosen to take part in a deadly game. Along with eight others, you must find a way through a series of rooms that offer no easy exit, or die trying. Nine Hours, Nine Persons, Nine Doors pulls you into this grim circumstance through its absorbing storytelling and through puzzles that engage your wits but rarely frustrate them. The terrifying dilemma the characters are forced to confront is not one most people would ever want to face, but this excellent adventure game makes vicariously experiencing that horrific situation tough to resist.

The most immediately striking thing about Nine Hours is how much time you spend reading. Long stretches are spent just clicking from one screen of text to the next. It's not just dialogue from your companions that appears as words onscreen. Your character's thoughts, detailed descriptions of your environments, and subtle observations about your companions' behavior that the animated portraits of them aren't capable of conveying are all communicated through text. The first time you make your way through the game--and you almost certainly will want to play it multiple times--perhaps a few hours of your time with it will be spent reading, and this can sometimes make Nine Hours feel more like an interactive book than a game. This may sound like a bad thing, but in fact, the story is so well written that these passages only work to pull you deeper into the fear and tension that build as you progress through the ship.

For purposes unknown, an enigmatic figure named Zero has captured nine people and brought them to this ship to play what he calls the nonary game. The prisoners have little choice but to play, as Zero has taken the liberty of planting a bomb inside each of them, and he lays out certain ground rules the nine must abide by if they don't want to end up splattered on a bulkhead. Early events make it very clear that Zero is not messing around, which creates an atmosphere thick with dread. You play as Junpei, a college student. Among your companions are a very capable blind man, a flamboyantly dressed woman with a thorny attitude, and, mysteriously, a girl Junpei was friends with in elementary school. Is this mere coincidence, or did Zero choose the two of them for a reason? There is no voice acting here, but you won't miss it. The expressive portraits and the rich writing give each character such a distinct personality that you have no trouble hearing their voices in your head as you read their words. The environments you explore aren't impressive to behold, but they're clear and easy on the eyes, which is vital as you seek clues to aid in your escape, and throughout your quest, atmospheric sound effects like the ominous creaking of the ship send shivers up your spine.

Zero gives the players nine hours to make their escape, but there is no actual time limit. The clock advances at set points in the story, so you can take as much time as you need to work out the puzzles in each locked room. Thorough exploration is always the key to success. Viewing your surroundings from a first-person perspective, you move to set positions in each locked room in a manner reminiscent of Myst and numerous other point-and-click adventure games, and tap items in the environment to inspect or interact with them. The puzzles incorporate everything from sheet music to baccarat, but no prior knowledge of any such elements is needed to work out these brainteasers. Simple experimentation or some informative words from one of your companions always tell you what you need to know. And the puzzles never become irritating pixel-hunts; everything you need to inspect is clearly visible, as long as you look carefully.

With the clues and items you find in each locked room and a bit of logical thought, the solutions to the puzzles typically fall into place, even when those solutions involve using the items you've found to create makeshift contraptions that would make MacGyver proud. They're challenging enough to be satisfying to work out, but not so frustrating that you start banging your head against the wall. And if you do find yourself stuck for a while, tapping on the aspects of the environment that are part of the puzzle you need to solve--a door with a frozen handle, for instance, or the keypad for a locking mechanism--will eventually result in Junpei or his companions voicing ideas that shed more light on how you might make your escape. It's a great system that gives you help when you need it without denying you the rewarding feeling of working out the solutions for yourself.

Aside from taking control when you're in the locked rooms you must enter periodically throughout your journey, your only other role is to answer the occasional question from your companions and to make the occasional choice about which room to enter. Early on, you learn that Zero, the mastermind behind this deadly game, has applied a logic to your progress that prevents all the companions from entering rooms together. Each unwilling player is wearing a bracelet with a single digit on it (Junpei's number is 5), and each puzzle room you encounter has a number on it. Only groups of three to five people may enter each room, and to do so, the digital root of their bracelet numbers must equal the number on the door. The digital root is worked out by adding the players' bracelet numbers, and if the resulting number is 10 or greater, you must add the digits until the result is a single-digit number. In other words, if Junpei encounters door number 7, he can team up with players 8 and 3 to enter, since 5+8+3=16 and 1+6=7.

This system requires the companions to work together and to split up, which is a significant source of tension throughout the story. For instance, while Junpei and a few companions are exploring a puzzle room, another player may meet a truly grisly fate by doing something that triggers the bomb planted inside him to go off, like entering a room alone. Or perhaps other players forced him into that room alone. Events like this cause suspicion to brew within the group, and with tensions running high and psyches getting frayed, Junpei may find himself meeting his own horrific demise. Encountering such a violent end to the story is shocking, and at first, being sent all the way back to the start of the game may seem like a tremendous setback, because you do have to go through the motions of solving some puzzles you've already solved, such as escaping from the room in which you awaken. However, the fact that you can quickly skip the long stretches of text you've already read means that you're soon able to make new choices about which rooms to enter and which companions to go with, and since there will invariably be rooms that you didn't explore on your first play-through, your subsequent journey is a largely new experience. It's exciting to return to this most dangerous game and try to make choices that result in a happier ending, hopefully uncovering more about Zero and your companions in the process.

Like a great page-turner, Nine Hours is very tough to put down once you start. The engrossing puzzles work hand in hand with the terrific storytelling to pull you into the gut-wrenching situation Junpei and his companions find themselves in, and the tension progressively ratchets up to keep you glued to the game and biting your nails as you seek an escape from this terrifying dilemma. At least on your first play-through, you may spend more time reading Nine Hours than playing it, but this is reading that makes you feel more involved in the story, not less, and you'll be eager to jump right back into this tale from the beginning when you encounter one of its six possible endings. For those who enjoy point-and-click adventure games and don't mind the gruesome possibility of having someone explode all over them, Nine Hours, Nine Persons, Nine Doors is a delightfully chilling treat. 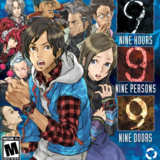