Nightmare Creatures ultimately ends up as a fairly disappointing experience.

It's like David Bowie said, "Scary Monsters." Kalisto Entertainment's Nightmare Creatures sees 19th century London threatened by an onrush of gruesome beasts brought forth by the evil Adam Crowley (sort of a mix of the 1920's "wickedest man in the world" Aleister Crowley and The Muppet Show's Animal) and his sinister cult, the Brotherhood of Hecate. It's your job to wipe out these most unholiest of unholies and their master - either as the young American swordswoman Nadia or Ignatius, the staff-wielding monk.

While Nightmare Creatures has been likened to a hybrid of Eidos' Tomb Raider and Capcom's Resident Evil, that's not an entirely accurate analogy. The title takes place in a spooky 3D world that you view from a behind-the-back perspective; and that's where any comparison to either of the games pretty much stops. The game runs at a jaunty 30+ frames per second with up to four monsters simultaneously onscreen and with little or no slowdown, though admittedly, the environment is kept fairly dark and/or misty so that you can't watch the graveyards, alleys, sewers, and the like being built up around you. It's less a criticism than an observation, since the darkness can easily be attributed to "atmosphere."

But catacombs and cesspools aside, the real mood-setters are the monsters. You will encounter fifteen distinct types of creatures (ranging from zombies to giant spiders, dog-sized rats to werewolves, hellhounds to harpies, and three-headed ogres to flaming imps) and five different bosses, such as the Yeti, a four-headed fire-breathing serpent, and old Crowley himself. All have distinct powers and attack styles, making them quite a caliginous handful when an unpredictable, varied group pounces on your character all at once.

To combat these nasties, the characters are each equipped with a rudimentary sword or staff, which can eventually be upgraded to more lethal devices such as spiked clubs, double axes, and machetes. Beyond the basic wherewithal to attack these monsters in the first place, you also have a variety of fighting moves at your disposal. Additionally, there are quite a few power-ups to be found, such as single-shot and burst pistols, half and full healths, mines, fire bombs, and freeze, confusion, and berserker spells. And while the list may seem excessive, you will need all of this to stay alive. Besides the proficiency of the enemy creatures, there's an ever-dwindling adrenaline bar, which measures the amount of the natural stimulant in your system that must remain full to keep a Crowley-concocted poison from destroying your system. You can keep your adrenaline high only by continuously seeking out and winning battles.

And fighting the creatures can be a lot of fun, at least early on. They're very well designed, and their animations give them a sense of life. And power-ups such as the razor (which lets you slice them in half or quarters) are quite a kick. In fact, you can lop off the monsters' heads and their bodies will often still chase after you.

Altogether, it's a moderately interesting and original game package, though it definitely has its downside. For instance, after being made to execute about four full leaps, you must complete a number of difficult running jumps while avoiding/fighting several large, poly-tentacled monsters. Since falling into water kills the character off and the section is fairly far into the level, you don't get many chances to practice your technique before having to start over from scratch. If, hypothetically, the area had a series of connected catwalks to run through while battling the beasts or if the jumping function wasn't so entirely awkward to deal with, the level would've been much more enjoyable. While this is less of an issue later on in the game, the weakness of the fighting engine then becomes more readily apparent. Though there are reportedly 30 combos in all, you really will only end up using about six to eight. Since the more complex moves are significantly harder to pull off (especially with those attacking creatures interfering and all), you'll end up jamming on the kick or slash buttons with an occasional block or dodge. And while the thought of having to keep fighting throughout the entire game can seem pretty appealing, it loses its charm after you die several times trying to explore or find your way.

While it does have a lot of nice elements, Nightmare Creatures ultimately ends up as a fairly disappointing experience. That's really quite a shame because the potential and premise were clearly there for it to be an incredible game; it just feels like it came out of the development oven a few months too early. Perhaps the extra time and effort that seem to be missing from this title will appear in a sequel. We'll just have to wait and see. 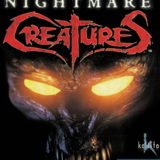