Nightcaster is a game that aims for the sky but comes up a little short.

VR-1, the developer behind Nightcaster, truly went out on a limb with its first Xbox game. The company is primarily known for online flight sims on the PC, most notably the Fighter Ace series. As the first action-adventure game from the team, Nightcaster is a game that aims for the sky but comes up a little short.

This fantasy-themed game puts you in the role of a young adventurer named Arron, who, after finding a mysterious glowing orb in a darkened cave, takes on the adventure of a lifetime, leaving his family and friends behind. When he emerges from his initial training, the young mage finds his homeland under a veil of darkness, ravaged by an evil entity known as the Nightcaster. With the help of your magical orb, you set out to bring light and peace back to the land where you grew up.

After a lengthy introductory sequence, you finally get to take the reins. Nightcaster, stated simply, has a complex control scheme, which makes use of all of the available buttons on the Xbox controller with the exception of the back button. The left analog stick moves Arron around, while the right stick guides the direction in which his spells are cast. The left and right triggers cycle through and cast spells, respectively, while the face buttons handle such tasks as viewing the in-game map, looking around freely, centering the camera, swinging your staff as a melee weapon, and returning to the third-person view. The left and right sticks, when pressed in, will reset the camera or third-person views as well. After you get a feel for which buttons you'll be using most in the game, Nightcaster is a breeze to play. Some players may find it much easier to turn off the analog stick buttons, as they can sometimes register as a button press right in the heat of battle, oftentimes causing a game-ending catastrophe.

The gameplay in Nightcaster centers on the powerful magic you wield. To start, there are four schools of magic: fire, water, dark, and light, all having different effects on the enemies you encounter. In each school of magic, there are four spells you can learn and three levels of strength for each, culminating in a total of 48 spells. Graphically, the animations for each spell are impressive and only get more intricate as your spells get more powerful. You can gradually earn new spells and increase their power by way of completing simple fetch quests, defeating boss monsters, or simply hunting them down in remote areas of the world map. At the end of each level, you are presented with a screen displaying how you've fared, and you're given the chance to go back to find something you may have missed.

Wielding your spells in the heat of battle, and doing so effectively, takes a little bit of practice. As previously stated, you possess the power to wield spells from four different schools of magic. As luck would have it, your enemies are color-coded in a similar way that your magic is, making them weak against spells from opposing schools and virtually immune to the spells from the school that they match. The battles in the game start out innocently enough--you are attacked by one or two enemies of the same color at a time--but after a while you'll be bombarded by droves of monsters of all different colors, as well as monster generators similar to those found in Gauntlet. It's a good idea to get the hang of switching your spells and casting quickly, because you'll need to have a strong handle on the concept right away. In all, the frenetic pace of combat in this game ends up being quite fun, especially with the relief you get after clearing out a large group of enemies. Nightcaster has a story to it, but it almost seems thrown together just for the sake of having a storyline. The cutscenes and interaction with other characters is so dull that skipping them and getting back to the game is far more involving.

When you guide Arron around the vast levels in the game, you can choose from two views, either a standard third-person, behind-the-back camera angle or an overhead view. When you move the right stick even the slightest bit, the camera automatically switches to the overhead view, and for the most part, this is how you'll be looking at the game while playing. While the third-person view is great when you're walking around, it makes combat rather hard, to the point where the overhead view is basically a necessity while fighting and is almost a nonissue since the overhead view is required to aim your spells in any direction other than straight ahead of you. In addition, you'll find that walking near or aiming your orb over random environmental objects causes them to become mostly transparent, almost to the point of the objects clipping out of the scene altogether. These quirks give Nightcaster some character, but not the kind of character you'd readily welcome.

While you often get little chance to stop and look at the graphics in Nightcaster, they can be summed up as plain. Given that your world is shrouded in darkness, much of the game looks very dreary, with muddy textures and colors that just don't seem to work together. Arron takes on a great amount of detail when viewed up close, but as you'll probably be viewing the game from the overhead view most of the time, it almost doesn't matter how detailed his model is. Nightcaster could have really benefited from having a manually controlled camera that worked in tandem with the spell orb, but alas, this is not the case. In the end, this game had the capabilities to be visually outstanding, but it's ultimately hampered by the overhead view that you're virtually forced to use.

Aurally, this game also has a few interesting quirks. The soundtrack to the game flips back and forth between something you might hear in a New Age boutique to pumping electronica, a combination that is strange to say the least. While the music is good, it's not something that is entirely memorable. Your spell orb and various key characters in the game also speak to you on a regular basis. Most of the characters you encounter sound decent, but as voice acting goes, again, it's nothing special. Your trusty orb, on the other hand, has an Irish accent. At times, it's almost comical, especially at the beginning of each level when you are treated to a limerick using an AAAA rhyme scheme. You might be reminded of an Irish Spring commercial, in fact. Another oddity with the sound in the game presents itself when you're casting spells. Whenever Arron wields a spell, he calls out the name, and during battle, it goes off without a hitch. Occasionally, when you cast a spell, it will hit and be followed by the voice a few seconds later. While this doesn't really detract from the game, it's a small bug that would have been better caught in the final stages of development.

In summation, VR-1 made a valiant effort with its first adventure game, but the game lacks long-term value. Had there been better implementation of the in-game camera, the game would have had a better chance of showing what it had to offer. It's almost a shame that the detail put into the graphics is all but hidden by the overhead view that you're seemingly stuck with. Nightcaster has all the makings of a solid game, but the bumps along the road make it a ride that isn't too comfortable. 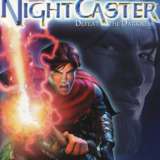