The post-apocalyptic world of Nier: Automata thrives on its mysteries. Its ruined Earth setting is a playground of mayhem where fashionable androids lay waste to less sophisticated looking robots. Its premise of a never-ending war is initially straightforward. But if you know anything about the game's director, Yoko Taro, then you know to expect the unexpected. That includes everything from an unusual soundtrack steeped in vocals to a battle-hardened heroine who walks with the swagger of a supermodel. Automata also delivers a well-executed and refined combat system, the level of which alone makes Automata well worth the price of admission.

You initially see Automata from the perspective of a female android named 2B who is part of YoRHa, a group of artificial soldiers tasked with wiping the Earth of its hostile robots and their alien creators. This conflict is all the more poignant due to humanity's displacement to the moon, an exodus that occurred hundreds of years ago. Joining 2B on most of her missions is 9S, a male android who lacks 2B's dual weapon-wielding prowess but compensates with invaluable hacking skills. They start off as strangers, but through the obstacles they overcome, an obvious closeness begins to form. This is thanks in part to Automata's sensational anime-as-hell archetypes and story beats.

Given that Earth is utterly overrun with homicidal machines, making Earth hospitable seems like a tall order. But this challenge is softened by the manageable size of Automata's open world, which is equivalent to a small city. It entices exploration without feeling intimidating, and it's hard to get lost once you've run through the same paths a couple times. Much of the backtracking stems from the game's numerable side quests, where you help your fellow androids on simple errands and kill missions. While most of these tasks aren't especially memorable, they do add character to world. Furthermore, monotony is minimized by the convenience of fast travel and swift steeds like moose and boars.

The brightside of being a robot exterminator in Automata is that your canvas of destruction is the product of Platinum Games. Their penchant for feverishly fast and elegant combat is on full display with visuals that echo even the most outrageous attacks from Bayonetta. Combat evolves beyond mindlessly mashing on quick and strong attacks thanks to the variety of bladed weapon styles. Combining any two types produces uniquely flashy animations and, more importantly, damaging results. You can trigger other gorgeous maneuvers by attacking after pulling off a slick dodge cartwheel or by holding down either of the two attack buttons. 9S' own skill with a sword makes him a substantial AI-controlled contributor, and his ability to keep up with 2B make the battles look positively frenzied. Given the demanding yet rewarding high-dexterity combat and the acrobatic skills of 2B, it wouldn't be unreasonable to say that Automata is the closest thing there is to a spiritual successor to Metal Gear Rising: Revengeance, also developed by Platinum.

You're expected to use tools and techniques beyond the two main attack inputs if you have any hope of victory in ever encounter. Your pod companion--which echoes Grimoire Weiss, the floating book from the first Nier--provides you with various forms of support. Not only does the pod provide you with a sustained ranged attack, it's another outlet for personalizing your approach to combat. You can swap in a wide variety of passive performance enhancing chips, that provide you with stat buffs and helpful automated commands. Relying on your pod to automatically use one of your health items when your HP drops below a certain point makes healing one less thing to worry about. Your pod allows you to focus on other survival concerns, like kicking ass and looking good in the process.

Given the demanding yet rewarding high-dexterity combat and the acrobatic skills of 2B, it wouldn't be unreasonable to say that Automata is the closest thing there is to a spiritual successor to Metal Gear Rising: Revengeance, also developed by Platinum.

If you ever run out of healing items and get murdered by enemy robot, however, you’ll lose your experience points if you can't return to the point of your last death. This is similar to the style of difficulty popularized by Dark Souls with an additional risk of loss: along with the suspense of potentially losing experience you've earned since your last save, you can also lose all of your pod's installed chips, with the exception of the mandatory operating system chip.

While Automata resoundingly delivers that specific flavor of stylish combat found in Platinum's best works, it never overshadows Taro's distinct directorial handiwork and penchant for unconventional game and narrative design. It's the type of production that seamlessly blends story, hack-and-slash combat, and--believe it or not--an engaging bullet-hell shooter component. You don't question the infantile behaviors of many of the enemy robots because they're so darn endearing. And you don't get an explanation for 2B's cosplay-ready gothic lolita outfits, how she manages to move smoothly through a desert in heels, or why some of her comrades behave like self-involved teenagers. You just go along with it because of Automata's captivating world and involving battles.

Taro's unorthodox approach to game design is best exemplified by Automata's multiple endings and the varying degrees of substance in those conclusions. He's not above novelty or gag endings, though the real rewards are the five major endings and the various journeys to each one. You don't get the complete picture until you reach those five endings. As you travel down these various paths, you're not only introduced to new events, but also given new perspectives to moments you've already experienced. Your forward progress isn't propelled by the mere compulsion to achieve 100% completion; you're simply pulled by curiosity to learn more about what happened to Earth and humanity.

Thanks to Platinum Games' knack for riveting and gratifying combat, Automata is Yoko Taro's most exciting game to date. The combat mechanics click after hurdling a low learning curve, and the end result is a skillful dance where balletic dodges complement wushu-inspired aggression. Moreover, this multi-ending trip is generously peppered with surprises and revelations, as well as easter eggs that call back to the first game and the Drakengard series from which Nier spun off. It's a meaty, often exhilarating trek that showcases Platinum Games' and Yoko Taro's unique blend of genius.

Editor’s note: Nier: Automata has released on Xbox One as the Become As Gods Edition, which includes the 3C3C1D119440927 DLC along with several cosmetic items for the main characters and pods. We tested the new Xbox One version by playing through the first three hours of the game, and it runs at a stable frame rate at 4K on the Xbox One X. Most importantly, everything we love about Nier: Automata is, of course, still here: the evocative soundtrack, unique narrative style, and affecting story are as strong as ever. We have updated the score to include the Xbox One version. - June 26, 8:00 PM PT

View Comments (795)
Back To Top
9
Superb
About GameSpot Reviews

Miguel needed 50 hours to reach all of Nier: Automata's five main endings as well as a couple of minor ones. He also checked off 50% of the side missions in the process. Additional testing was handled by other GameSpot staff. Square Enix supplied complimentary codes for all platforms. 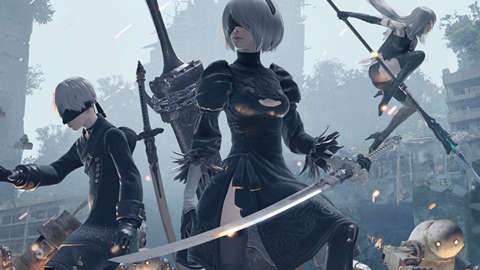 NieR New Project is a third-person action role-playing game and follow-up to the 2010 cult hit NieR.