There can be only one.

You throw your sword at your opponent's head and curse as it's deflected. You're now defenseless, and your opponent knows it. He runs at you, ready to strike. You have only half a second. You roll backward, grab an old sword off the ground, and get it up just in time to impale your opponent as he reaches you. This buys you a precious moment to gain a little ground before he respawns.

This all happens within seconds, and in a good game of Nidhogg, it's the kind of thing that happens multiple times.

Nidhogg is part fighting game, part tug-of-war. Two fighters enter at the center of a 2D side-scrolling arena, armed with only a sword. You can move your sword to one of three different heights (low, medium, and high), and the combat works like fencing: you don't swing; you stab. If you and the other player have your swords at the same height, the blades will clash, making the question of where and when to strike a mind game. A well-timed change in sword position can disarm your opponent, leaving him open to be pierced through the torso (or head, if you're so positioned). Tapping a direction takes a small step, while holding runs. If you want to get a little fancier, you can dive-kick, roll, cartwheel, throw your sword, or, if empty-handed, try to pummel your opponent with your fists. All with only two action buttons: jump and attack. Rarely do games with such simple controls offer so much variety in their actions.

The first person to kill the other gets to run toward his or her goal like a football player dashing for the end zone. That fight is not the end, however, because you continue to respawn until you have either won or lost. If you can come back and kill the other player before he reaches his goal, you gain control of the screen and can make a mad dash for your goal instead. To take the football analogy further, it's like forcing your opponent to fumble and then running away with the ball, until he wrestles the ball back from you and goes their way again until somebody finally scores. A single game could just as easily last 20 seconds as 20 minutes, depending on the skill of both fighters. The back-and-forth between two well-matched players is thrilling, and there's a pure exhilaration that comes from being on the brink of a loss, making the right move at the right time, and fighting your way back to win.

Nidhogg's battles can be intense in part because the playing field is perfectly even. There are no special characters to select, and every arena is symmetrical. Nobody starts with an advantage, and your victory or failure depends entirely on your own skill. Some strategies may seem to be surefire ways to succeed, but that's only true until your opponent catches on to what you're doing and learns how to defend against it.

You can fight on four different stages, each of which sports unique features to differentiate it from its brethren. One stage features areas with tall grass that hides the position of your sword, making close-quarters duels more of a guessing game. Another stage features long, narrow corridors that negate the usefulness of both jumps and sword throws. Everybody is likely to have a favorite stage, though the overly bright first screen of the Clouds stage might cause headaches for some.

Even though only two people can play at a time, Nidhogg is an excellent game for parties or other group activities. A built-in tournament mode facilitates up to eight players, and you can mix things up with gameplay variants such as low-gravity boomerang mode, where thrown swords come back to their original owner, or baby mode, which forces both fighters to crawl everywhere (good for an initial laugh but not the most enjoyable way to play). While there are tricks to pick up, there are no complex moves to learn. Nidhogg has all the intensity of a close fighting-game match without most of the complexity.

If you don't have any local friends to play with, your options are severely limited. A single-player mode lets you fight a string of AI fighters, which can be a lot of fun and perfect training for human opponents, but it can be "beaten" in about 30 minutes even by a beginner. It welcomes replays, but fighting the computer isn't nearly as satisfying as fighting a friend, and none of the multiplayer variants are available to a single player. Nidhogg is a game made for friendly competition, and you won't find much if you intend to play alone.

This wouldn't be as much of an issue if Nidhogg satisfactorily delivered on one of its promises: online multiplayer. Unfortunately, every match of the more than 20 I played was plagued by lag that ruined the experience. This isn't as noticeable if you're the player hosting the game (which could lead you to think you're a Nidhogg savant if you don't know any better), but as a guest player, you find yourself warping around the stage, landing a killing blow that doesn't actually kill your foe, and getting stuck while grabbing ledges. Even matches that aren't as loaded with these problems suffer just enough to make the experience disappointing at best and frustrating at worst.

There are other rough edges here and there, such as the apparent lack of D-pad support (at least on the Xbox 360 controller I played with) and the fact that not every menu can be controlled with the controller, though the game's Steam page claims "Full Controller Support." These are mostly small inconveniences that will hopefully be ironed out later in Nidhogg's life, as was the game's tutorial, which was broken at launch.

It would be easy to glance at Nidhogg and wonder how it could possibly be worth the price. The graphics look crude (though there is a fluidity to the animation that fits the action well), the single-player is almost nonexistent, and there are only four stages. Indeed, if you intend to play alone, Nidhogg is almost certainly not the game for you. But it also offers a rare local multiplayer experience that is easy to pick up, highly competitive, and perfectly balanced. If you have friends nearby, this is some of the most fun you can have stabbing them through the heart. 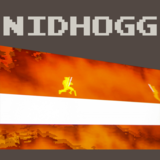 Britton Peele owns more than one sword, so it's sort of surprising that he also has friends to play Nidhogg with. He was responsible for the deaths of hundreds of virtual swordfighters both online and off before writing this review, and looks forward to new challengers. 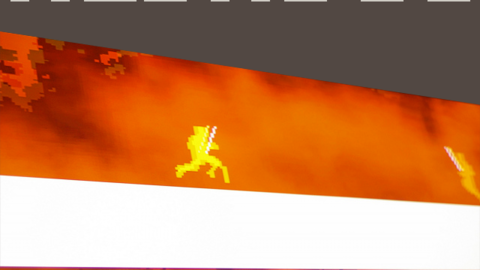 Nidhogg is a two-player fencing game with football and platforming elements.