You'd probably be better served by NHL 98 or NHL Breakaway '98.

Ever since EA's hockey games on the Genesis, design teams have tried to recapture that magic on 32-bit systems. NHL Powerplay '98, like every other hockey game this year, fails to deliver. However, PP '98 does have its strong points.

Powerplay '98 is Virgin's second entry into the arena of hockey, its first attempt being Powerplay '96. Virgin skipped '97 in the hopes that the extra time would help deliver a better game with more current players. The best thing to come out of PP '98 is the AI. The machine is constantly putting pressure on the player, and the moment the player relaxes, the AI makes its move. On the higher difficulty levels, the computer simply wipes the floor with you by knocking your players to the ice and stealing the puck. The players all skate very well, and Powerplay's physics model is very realistic. Overall, the gameplay is solid.

Graphically, Powerplay fails. The players have lots of animations (except for falling down, which only has two or three), but you probably won't notice them because they are so jerky. Compared with the other PlayStation hockey titles, PP '98 comes out on the bottom. On a good note, however, the sound effects and music in the game are really good. Unlike most hockey games, the announcer isn't annoying.

PP '98 contains all the standard features people have come to expect from a sports game. It has all the real teams, plus 16 international teams. All the NHL players are represented as well. The game keeps stats over the course of season play, and you can create and trade players at will.

The bottom line? NHL Powerplay '98 isn't the best in any specific category, but it does everything (with the possible exception of graphics) reasonably well. You'd probably be better served by NHL 98 or NHL Breakaway '98. 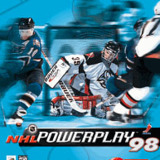